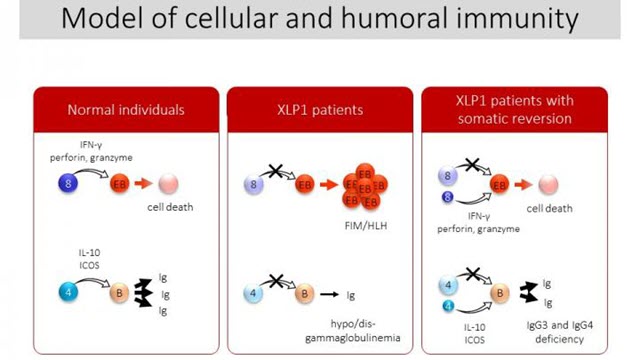 This slide illustrates a model of cellular and humoral immunity regarding SAP.CREDIT: Department of Child Health and Development,TMDU

Human SH2D1A mutations resulting in X-linked lymphoproliferative syndrome type 1 (XLP1) are associated with a unique susceptibility to the Epstein-Barr virus (EBV), which may lead to fatal infectious mononucleosis (FIM). Many studies have attempted to elucidate an appropriate treatment for XLP1 that does not involve hematopoietic stem cell transplantation (HSCT); clinical evidence supporting such treatments has been minimal, until now.

In a new study published in the Journal of Allergy and Clinical Immunology, an international research team led by experts from Tokyo Medical and Dental University (TMDU) investigate the mechanism of mild disease presentation in a family with XLP1 that did not undergo HSCT, and found evidence of somatic reversion, or a return to normal expression levels, of SLAM-associated protein (SAP) in T cells.

Patients with XLP1 are susceptible to severe complications of EBV infections, such as FIM, which has a high mortality rate. This is attributed to poor activation and cytotoxicity of the CD8+ T cell. The only effective treatment for XLP1 has been HSCT. Unfortunately, HSCT has a high risk of treatment-related mortality and many side effects.

"We analyzed the clinical features of 40 Japanese patients with XLP1," says Hirokazu Kanegane, corresponding author on the study. "We identified a family that did not experience FIM, although none of the members had undergone HSCT."

In the study, whole-exome sequencing of patients in the family with mild disease revealed a known mutation, which reduced the expression of SAP in T cells in affected patients. This conflicted with the mild disease presentation.

"We performed more detailed analyses of T cells in the affected family, and found small populations of CD4+ and CD8+ T cells expressing functional SAP at normal levels," says Akihiro Hoshino, lead author on the study. "Because this somatic reversion was present in multiple patients in the same family, it may be an inherited characteristic."

Small populations of T cells with normal SAP expression could modify the severity of disease in these patients. The researchers speculated that gene therapy or adoptive cellular therapy—which affect fewer cells than HSCT, but are much less dangerous—could be effective for treating patients with XLP1.

XLP1 is a disease with deficient immunity against EBV, which can result in fatal outcomes. Treatment has been limited to HSCT, which can be a dangerous approach. This study showed that small populations of normal T cells could reduce the severity of disease, suggesting that less invasive therapies may be useful in treatment of XLP1.