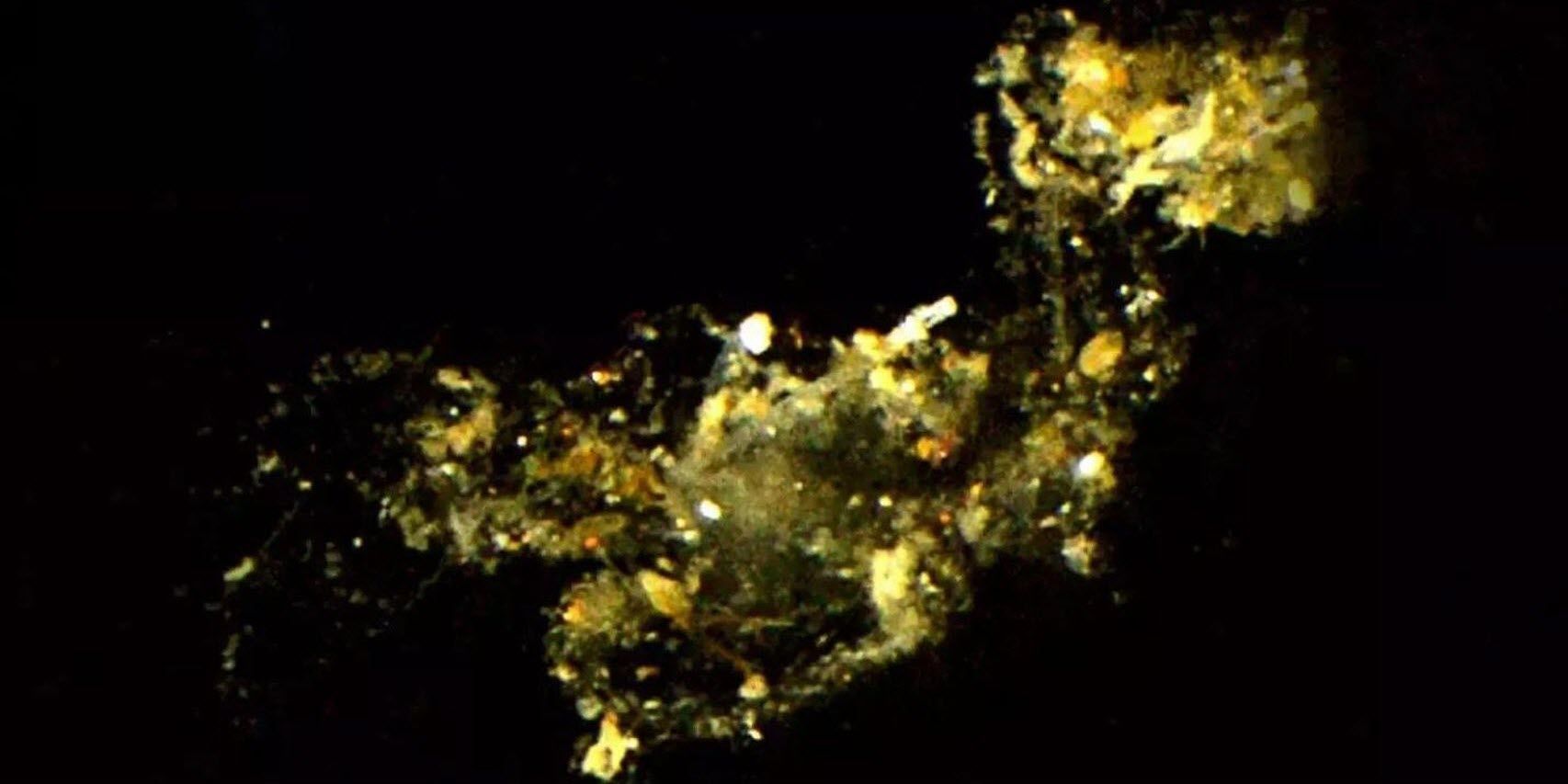 Small marine "snowflakes" are very important for the nutrient balance of the oceans. The particle shown here is highly magnified - in reality small particles are only about the width of a human hair and thus barely visible.
Max Planck Institute for Marine Microbiology / C. Karthäuser and S. Ahmerkamp

In the deep waters that underlie the productive zones of the ocean, there is a constant rain of organic material called "marine snow." Marine snow does not only look like real snow but also behaves similarly: Large flakes are rare and fall quickly while highly abundant smaller flakes take their time. Scientists from Bremen and Kiel have now discovered that precisely those features explain why small particles play an important role for the nutrient balance of the oceans. These findings have now been published in Nature Communications and will aid in the further development of biogeochemical models that include the marine nitrogen cycle.

A team of scientists from the Max Planck Institute for Marine Microbiology, the Max Planck Institute for Meteorology and the GEOMAR—Helmholtz Centre for Ocean Research Kiel have been studying biogeochemical processes in the oxygen minimum zone of the eastern South Pacific off Peru, one of the largest low oxygen regions of the world ocean. The researchers focused on so-called marine snow particles of different sizes, which are composed of algal debris and other organic material, aiming to understand how these particles affect the nitrogen cycle in the oxygen minimum zone. Thereby, they solved a long-standing puzzle: How do the nutrients that are concentrated inside the particles reach anammox bacteria that live freely suspended in the water column.

Too much of a good thing can be bad

Oxygen minimum zones are regions of the ocean where little or no oxygen is dissolved in the water. As most animals need oxygen to breathe, they cannot survive in these water bodies. Not surprisingly, oxygen minimum zones are also referred to as marine dead zones. Oxygen minimum zones are a natural phenomenon, but have been found to be expanding in many regions of the ocean as a result of human activity. Global warming contributes to decreasing oxygen concentrations, as warm water stores less oxygen. Warmer surface water also mix less with the deep, cool water below, thus leading to stagnation and reduced ventilation.

Changes to the nitrogen cycle also have deleterious effects on ocean oxygen concentrations. Nitrogen is a vital nutrient that animals and plants need in order to grow. Normally rare in the ocean, nitrogen compounds that can be processed have become increasingly available in many coastal regions. Humans use large amounts of fertilizers with nitrogen compounds such as ammonium and nitrate for agriculture and these nutrients find their way into the ocean via rivers and the atmosphere in ever increasing amounts. This has severe consequences. The additional nutrients enhance phytoplankton growth. When the planktonic organisms die, they are decomposed by bacteria. During this process the bacteria consume oxygen, driving a decline in oxygen concentrations. Once oxygen is fully consumed, anaerobic microbial processes take over, during which microbes essentially "breathe" nitrogen compounds in place of oxygen, and as a result convert nitrate, nitrite and ammonium back to nitrogen gas and release it to the atmosphere.

Which factors drive the loss of nitrogen?

Combined, the anaerobic microbial respiration processes of anammox and denitrification in oxygen minimum zones lead to the loss of up to 40 percent of the oceans nitrogen. However the regulation of microbial nitrogen-loss processes in oxygen minimum zones is still poorly understood. This study is focused on the anammox process, i.e., anaerobic ammonium oxidation with nitrite. In their project, the researchers followed up on the observation that the anammox process is particularly high when organic material in the form of marine snow particles is especially abundant. Their hypothesis was that the organic material, which contains a large amount of fixed nitrogen, serves as a source of ammonium for the anammox reaction. Strangely enough, anammox bacteria do not seem to live on the marine snow itself, but in the water column. So how do these bacteria find their nutrients?

To unravel this puzzle, the scientists used underwater cameras to measure particle abundances over depth profiles at different stations in the oxygen minimum zone off Peru. "We observed that the anammox process occurs mainly in places where the smaller particles are abundant," says Clarissa Karthäuser, shared first author of the paper with Soeren Ahmerkamp. "This indicates that the smaller particles are more important for the anammox process than the larger ones—whereby small means that they are about the size of the width of a human hair and thus barely visible."

These small particles are very abundant in the water column and sink slowly, thus they stay in the oxygen minimum zone longer. Also, the organic material is packed more densely in smaller particles and as a result the small flakes transport a similar amount of material per particle as the larger clumps, which means that overall they transport significantly more nitrogen. "We estimated that the ammonium concentration around the particles is significantly increased," says Ahmerkamp. "This indicates two things: First, that the higher number and longer residence times of the smaller particles in the water column increase the likelihood that bacteria will encounter a small particle by chance. Secondly, the high ammonium concentrations in the boundary layer of the particle can then provide nourishment to the bacteria."

The new findings are crucial for the improvement of Earth system models. "With this study, we have resolved an important aspect of the anammox process and thus made an important contribution to a better understanding of the nutrient balance in the oceans," says Marcel Kuypers, head of the Department of Biogeochemistry of the Max Planck Institute for Marine Microbiology in Bremen. "With this improved process understanding, we provide the link between particle associated processes and N-cycling in oxygen minimum zones which can be adapted in biogeochemical Earth system models to better assess the effects of anthropogenic deoxygenation on the nitrogen cycle."

- This press release was originally published on the Max-Plank-Gesellschaft website. It has been edited for style