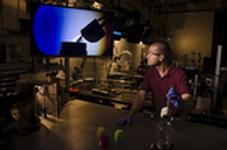 Matt Staymates, a mechanical engineer at the National Institute of Standards and Technology (NIST), uses a schlieren imaging system to visualize the flow of vapors into an explosives detection device fitted with an artificial dog nose that mimics the "active sniffing" of a dog. The artificial dog nose, which was developed by Staymates and colleagues at NIST, the Massachusetts Institute of Technology Lincoln Laboratory, and the U.S. Food and Drug Administration, can improve trace chemical detection as much as 16-fold. © Robert Rathe“The dog is an active aerodynamic sampling system that literally reaches out and grabs odorants,” explained Matthew Staymates, a mechanical engineer and fluid dynamicist at the National Institute of Standards and Technology (NIST). “It uses fluid dynamics and entrainment to increase its aerodynamic reach to sample vapors at increasingly large distances. Applying this bio-inspired design principle could lead to significantly improved vapor samplers for detecting explosives, narcotics, pathogens—even cancer.”

Following nature’s lead, Staymates and colleagues from NIST, the Massachusetts Institute of Technology’s Lincoln Laboratory and the U.S. Food and Drug Administration fitted a dog-nose-inspired adapter to the front end of a commercially available explosives detector. Adding the artificial dog nose—made on a 3-D printer—to enable active sniffing improved odorant detection by up to 18 times, depending on the distance from the source.

Trace detection devices now used at points of entry and departure such as airports and seaports, and other sensitive locations, typically employ passive sampling. Examples include equipment that requires swabbing hands or other surfaces and then running the sample through a chemical detector—typically an ion mobility spectrometer. Wand-like vapor detectors accommodate more sampling mobility, but unless the detector scans immediately above it, the chemical signature of a bomb-making ingredient will go unnoticed.

Aiming to uncover clues on how to improve trace detection capabilities, the researchers turned to one of nature’s best chemical detectors: the dog. Through their review of previous studies, the team distilled what occurs during sniffing. Five times a second, dogs exhale to reach out, pull and then inhale to deliver a nose full of aromas for decoding by some 300 million receptor cells.

Using a 3-D printer, Staymates replicated the external features of a female Labrador retriever’s nose, including the shape, direction, and spacing of the nostrils. Moving air through the artificial nose at the same rate that a dog inhales and exhales allowed them to mimic the air sampling—or sniffing—of dogs.

With schlieren imaging—a technique widely used in aeronautical engineering to view the flow of air around objects—and high-speed video, the team first confirmed that their imitation nose could indeed sniff much like the real thing, a property documented in previous studies of live dogs.

With each sniff, air jets exit from both nostrils, moving downward and outward. Though it might seem counterintuitive, the air jets entrain—or draw in—vapor-laden air toward the nostrils. During inhalation, the entrained air is pulled into each nostril.

The team’s first set of experiments compared the air-sampling performance of their “actively sniffing” artificial dog nose with that of trace-detection devices that rely on continuous suction. The head-to-head comparison with an inhalation system used with a real-time monitoring mass spectrometer found that sampling efficiency with the sniffing artificial dog nose was four times better 10 centimeters (3.9 inches) away from the vapor source and 18 times better at a stand-off distance of 20 centimeters (7.9 inches).

On the basis of those results, the team chose to outfit a commercially available vapor detector with a bio-inspired 3D-printed inlet that would enable it to sniff like a dog, rather than to inhale only in 10-second intervals, the device’s normal mode of operation. The switch resulted in an improvement in odorant detection by a factor of 16 at a stand-off distance of 4 centimeters (1.6 inches).

“Their incredible air-sampling efficiency is one reason why the dog is such an amazing chemical sampler,” Staymates said. “It’s just a piece of the puzzle. There’s lots more to be learned and to emulate as we work to improve the sensitivity, accuracy and speed of trace-detection technology.”

The research is reported in the journal Scientific Reports.