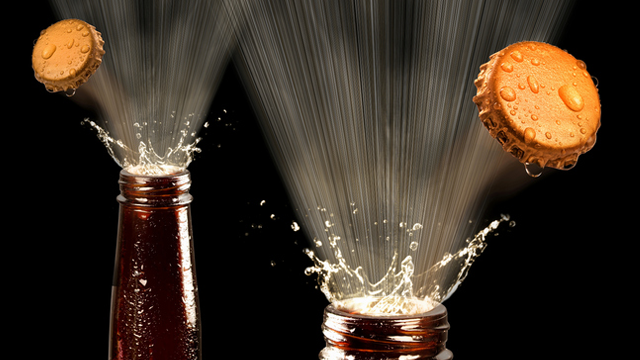 Some contaminant yeasts make beer bottles and cans explode. Apart from being dangerous for consumers these ‘diastatic’ yeasts also cause loss of beer batches due to off-flavors, increased alcohol, and over-carbonation in products. VTT scientists developed a genetic test for brewers to detect the strains that cause these problems.

Diastatic yeasts are one of the most important and problematic contaminants in the brewing industry. The number of contaminations has increased during the past few years, particularly in smaller breweries.

Diastatic yeasts cause problems in the brewing industry due to their ability to produce an enzyme that converts starch in beer into sugar, which is then fermented to alcohol and carbon dioxide. This is something a normal brewing yeast doesn’t do. In extreme cases bottles or cans have exploded due to a build-up of pressure in the package. Even severe injuries have been reported by the media. This has become more common in recent years.

Both regular brewing yeast and the problematic diastatic yeast belong to the Saccharomyces cerevisiae species, which makes their differentiation difficult. However, the diastatic yeast carry an extra gene, STA1, which results in the diastatic enzyme and can be used for detection.

Testing for the presence of the STA1 gene is a traditional method to detect this contaminant. However, not all strains with the gene are problematic. This means that breweries might get a positive result from the test, despite the yeast posing little risk. They might then unnecessarily discard beer that could still have been sold.

“At VTT we have discovered why some strains with the gene are active, and therefore problematic, while others are not. The difference was due to a deletion in the promoter of the STA1 gene—in other words, the genetic sequence in front of the gene controlling how much the gene is expressed”, explains research scientist Kristoffer Krogerus from VTT.

VTT’s scientists developed a new genetic test, which can be used in exactly the same way as the current industry standard, but which can differentiate the problematic strains with the active STA1 gene from those with the inactive form of the gene.

The traditional genetic test can only detect whether the strain contains the STA1 gene or not. It can not differentiate spoilage yeasts from non-spoilage yeasts. Previously, one would have to combine the genetic test with a microbiological test, where the yeast is grown on special agar plates—a process that takes several days.

The new method offers breweries savings in time because results can be achieved in hours instead of weeks, and also cost savings and a more reliable quality control. It also decreases the times beer batches are unnecessarily recalled from shops or discarded.