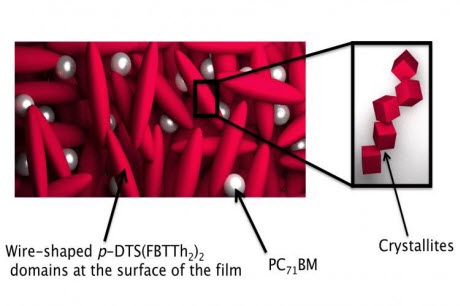 Fullerenes appear as small silver spheres spread consistently throughout a network of small molecules, or polymers, in this schematic illustration of the morphology of a BHJ film with solvent additives. Image Credit: ORNLOctober 19, 2015 – Advances in ultrathin films have made solar panels and semiconductor devices more efficient and less costly, and researchers at the Department of Energy’s Oak Ridge National Laboratory say they’ve found a way to manufacture the films more easily, too.

Typically the films—used by organic bulk heterojunction solar cells, or BHJs, to convert solar energy into electricity—are created in a solution by mixing together conjugated polymers and fullerenes, soccer ball-like carbon molecules also known as buckyballs.

Next, the mixture is spin cast on a rotating substrate to ensure uniformity, then sent to post-processing to be annealed. Annealing the material—heating then cooling it—reduces the material’s hardness while increasing its toughness, which makes it easier to work with.

Now ORNL researchers say a simple solvent may make thermal annealing a thing of the past.

In a collaboration between ORNL’s Spallation Neutron Source (SNS) and the Center for Nanophase Materials Sciences (CNMS)—both DOE Office of Science User Facilities—postdoctoral researcher Nuradhika Herath led a team of neutron and materials scientists in a study of the morphology, or structure, of BHJ films.

“Optimizing a film’s morphology is the key to improving device performance,” Herath said. “What we want to find out is the relationship between the blend structures and photovoltaic performance.” Finding ways to tune the film’s morphology is as important as answering why certain film morphologies are more favorable than others, she added.

Researchers compared thermal annealing with a method that adds a small amount of solvent that aids in dissolving the fullerenes within the blend and helps to make the film’s structure more uniform.

The idea is to get the most uniform mixture of light absorbing molecules (e.g., polymers or other molecules) and fullerenes throughout the film. If the mixture is not uniform, clusters form and cause passing electrons to get absorbed, weakening the film’s ability to transport electrical current, which in turn decreases device performance.

Because the films are typically about 100 nanometers thick (for comparison, a human hair is about 75,000 nanometers in diameter) and the depth profile of the composition is highly complex, special instruments are needed to measure the material’s morphology. For this, researchers turned to neutron scattering.

After mixing and spin casting two different samples at CNMS—one annealed, the other with solvent additive—the team put both films under the eye of SNS’s Magnetism Reflectometer (MR), beam line 4A. MR provided them with an accurate depiction of the structural profiles, which revealed exactly how the polymers and fullerenes were arranging themselves throughout both films. The difference between them was evident.

Whereas the annealed sample’s morphology clearly showed significant separation between the polymers and fullerenes, the sample containing the solvent additive was remarkably consistent throughout and performed better.

“The reason is that when we use a solvent instead of annealing, the sample dries very slowly, so there is enough time for the system to become fully optimized,” said MR Lead Instrument Scientist Valeria Lauter. “We see that additional annealing is not necessary because, in a sense, the system is already as perfect as it can be.”

Neutron reflectometry is a powerful method because it effectively makes many materials transparent, Lauter explained. Instead of searching for the key that opens the metaphorical black box that prevents researchers from seeing a material’s atomic structure, she says, neutrons simply go straight through it, giving researchers both qualitative and quantitative information about their problem.

Not only will the information obtained from neutrons help increase the efficiency of solar cells’ performance, but they will also streamline the process of manufacturing them. Using solvent additives to optimize the morphology of BHJ films could negate the need to invest more into a less effective process—a savings of time, money, and resources.

“In addition, optimization of photovoltaic properties provides information to manufacture solar cells with fully controlled morphology and device performance,” Herath said. “These findings will aid in developing ‘ideal’ photovoltaics, which gets us one step closer to producing commercialized devices.”

The researchers discuss their findings in the journal Scientific Reports, 5, 13407 (2015).

This research used resources of the Spallation Neutron Source and the Center for Nanophase Materials Sciences at ORNL, which are DOE Office of Science User Facilities.