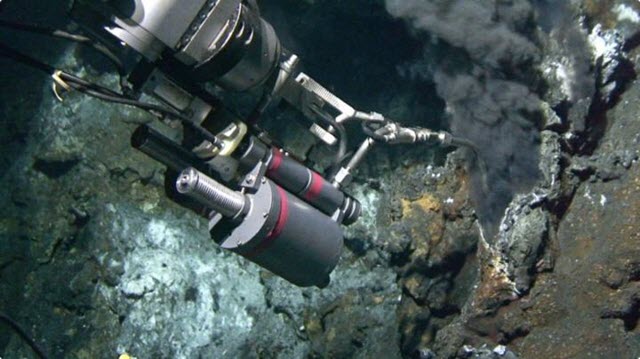 Alvin, the undersea research vehicle, has a robotic arm that deploys a hydraulic fluid sampling device with a "snorkel" that sticks into the black smoker fluid. The operation helps researchers look for old carbon and graphite.Credit: Photo courtesy of Woods Hole Oceanographic Institution and the Advanced Imaging and Visualization Lab

For years, researchers looking at seafloor sediments would find bits of black carbon along with organic carbon strewn across the ocean floor, but they couldn't say exactly where it originated. The challenge with studying deep marine carbon is that it is a mixture of fresh material delivered from the surface and an aged component, the origin of which had been previously unknown.

Now, a new University of Delaware study recently published in Nature Communications shows for the first time that the old carbon found on the seafloor can be directly linked to submicron graphite particles emanating from hydrothermal vents.

Identifying the sources, transport pathways, and the fate of this seafloor carbon is key to understanding the dynamics of the marine carbon cycle.

The study was led by Emily Estes, a former post-doctoral researcher at UD who is now a staff scientist with the International Ocean Discovery Program at Texas A&M University, and George Luther, the Maxwell P. and Mildred H. Harrington Professor of Marine Chemistry and the Francis Alison Professor in UD's College of Earth, Ocean and Environment (CEOE).

To conduct their study, the researchers used samples of nanoparticles from five different hydrothermal vent sites collected during a research expedition to the East Pacific Rise vent field in the Pacific Ocean in 2017, funded by the National Science Foundation's marine geology and geophysics program.

Estes conducted shipboard sampling of hydrothermal vent fluids and particulates during the expedition, which was led by Luther.

When they got back from the research cruise and wanted to take a deeper look at what they collected, the samples were analyzed under scanning and transmission microscopes by colleagues at the National Center for Earth and Environmental Nanotechnology Infrastructure (NanoEarth) at Virginia Tech.

Once they looked at the results, Estes noticed a large number of submicron graphite particles, similar to what would be found in an everyday lead pencil, in the samples.

While it's known that graphite can form hydrothermally in sediments, this study showed that these sub-micron particles of graphite that come out of the vents occur consistently across a range of vent environments, including both focused high temperature and low temperature venting sites.

"Even though our study is a preliminary observation of these particles, it suggests that they're probably very widespread and could be a significant source of this type of carbon to the deep ocean," said Estes.

Previous studies may have overlooked the significance of graphite particles because of the way in which dissolved organic carbon and particulate organic carbon are measured.

Working with Andrew Wozniak, assistant professor in the School of Marine Science and Policy in CEOE, and Nicole Coffey, a master's level student in CEOE who was also on the research cruise as an undergraduate in 2017, Estes and Luther were able to show that common techniques used to measure dissolved organic carbon or particulate organic carbon also pick up graphite.

Because graphite is only made up of carbon, however, if somebody just did a generic carbon-14 measurement, they might overlook that there's hydrothermal graphite in their sample.

"Graphite is not carbon with hydrogen, oxygen, nitrogen, and other elements," said Luther. "So here's an inorganic form of carbon, because it's pure carbon, that's also being measured as organic carbon, whether it's dissolved or particulate."

Finding these submicron graphite particles helps to answer a mystery that has confounded researchers with regards to dissolved organic carbon in really deep ocean environments.

"If you measure the carbon-14 age on it, it comes out to be a little bit older than you would actually expect and so there's been a mystery surrounding what the source of this old organic carbon is," said Estes. "We showed that vents emit this graphitic carbon."

Another important point of the paper is that because these graphite submicron particles are not dense and emit from the hydrothermal vents in flat sheet-like structures, they have the potential to get entrained into ocean currents and distributed far away from the vent sites. This will be important to take into consideration for future research in regards to the marine carbon cycle.

"The next steps will be trying to actually quantify how much carbon is coming out of the vents and then compare that to what we measure as dissolved organic carbon in the ocean and figure out what part of the flux it is," said Estes.