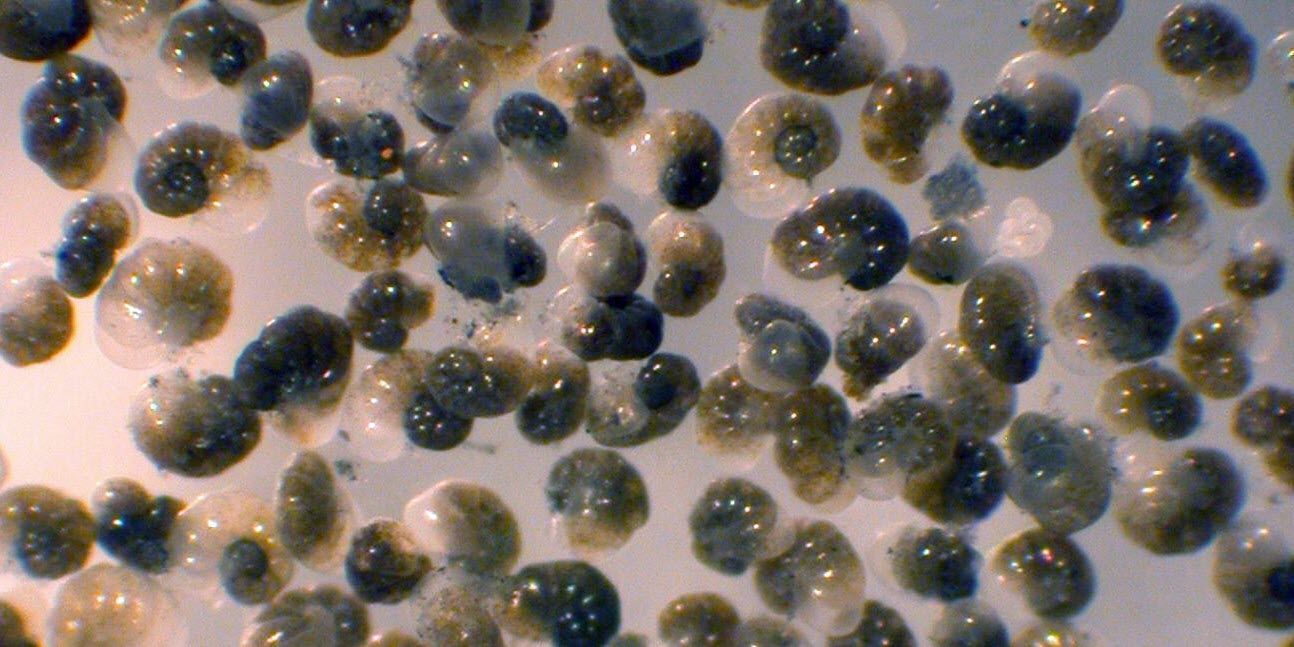 Light micrograph of the benthic foraminifer Nonionella stella, which thrives in anoxic sulfidic sediments far below the euphotic zone. Individuals are ~225 microns in diameter.
J.M. Bernhard.

Woods Hole, MA  — May 27, 2021 — With the expansion of oxygen-depleted waters in the oceans due to climate change, some species of foraminifera (forams, a type of protist or single-celled eukaryote) that thrive in those conditions could be big winners, biologically speaking.

A new paper that examines two foram species found that they demonstrated great metabolic versatility to flourish in hypoxic and anoxic sediments where there is little or no dissolved oxygen, inferring that the forams' contribution to the marine ecosystem will increase with the expansion of oxygen-depleted habitats.

In addition, the paper found that the multiple metabolic strategies that these forams exhibit to adapt to low and no oxygen conditions are changing the classical view about the evolution and diversity of eukaryotes. That classical view hypothesizes that the rise of oxygen in Earth's system led to the acquisition of oxygen-respiring mitochondria, the part of a cell that generates most of the chemical energy that powers a cell's biochemical reactions. The forams in the study represent "typical" mitochondrial-bearing eukaryotes. However, these two forams respire nitrate and produce energy in the absence of oxygen, with one colonizing an anoxic environment, often with high levels of hydrogen sulfide, a chemical compound typically toxic to eukaryotes.

This is important because scientists have studied forams extensively for interpreting past oceanographic and climate conditions. Scientists largely have assumed that forams evolved after oxygen was on the planet and likely require oxygen to survive. However, finding that forams can perform the processes described "throws a whole new wrench in interpretations of past environmental conditions on Earth, driven by the foram fossil record," said co-author and project leader Joan Bernhard, senior scientist in the Geology and Geophysics Department at the Woods Hole Oceanographic Institution (WHOI).

Bernhard said that over the past several decades she has worked to establish that forams can live where there is little or no oxygen. "We never knew exactly why forams can live where there isn't any oxygen until molecular methods got good enough that we could really start to ask some of these questions. This is our first paper that's coming out with some of these insights," she said. Bernhard added that with thousands of foram species living today, and with hundreds of thousands extinct, it is likely that this is "the tip of the iceberg" in terms of possibly discovering other metabolic strategies invoked by these forams.

Specific insights from the paper pertain to two highly successful benthic foraminiferal species that inhabit hypoxic or anoxic sediments in the Santa Barbara Basin, a sort of natural laboratory off the coast of California for studying the impact of oxygen depletion in the ocean.

The N. stella is a sort of kleptomaniac, utilizing a technique to steal chloroplasts—the structure in a cell where photosynthesis occurs—from a particular diatom genus. What makes this particularly interesting is that N. stella lives well below what is considered to be the zone where photosynthesis can happen. The authors noted that there has been discussion in the literature questioning the functionality of these kleptoplasts in the Santa Barbara Basin N. stella but the new results show that these kleptoplasts are firmly functional, although exact metabolic details remain elusive.

In addition, the scientists found that the two foram species in the study use different metabolic pathways to incorporate ammonium into organic nitrogen in the form of glutamate, a metabolic strategy that was not previously known to be performed by these organisms.

"The metabolic variety suggests that at least some species of this diverse protistan group will withstand severe deoxygenation and likely play major roles in oceans affected by climate change," the authors wrote.

The study "gives the scientific community a new direction for research," said lead author Fatma Gomaa, who, at the time of the study, was a postdoctoral investigator at the Geology and Geophysics Department at WHOI. "We are now starting to learn that there are microeukaryotes living in habitats similar to those in Earth's early history that are performing very interesting biological functions. Learning about these forams is very intriguing and will shed light on how early eukaryotes evolved."

- This press release was originally published on the Woods Hole Oceanographic Institution website. It has been edited for style