Studying a new type of pinhead-sized, lab-grown brain made with technology first suggested by three high school students, Johns Hopkins researchers have confirmed a key way in which Zika virus causes microcephaly and other damage in fetal brains: by infecting specialized stem cells that build its outer layer, the cortex. 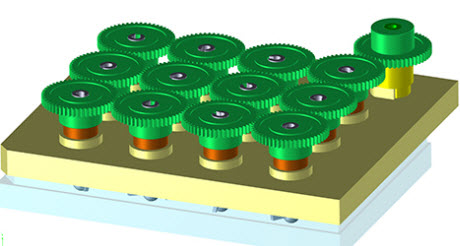 The SpinΩ bio-reactor used to create the conditions for mini-brains to grow. At bottom is a commercially available 12-well lab dish.Image credit: Johns Hopkins MedicineThe lab-grown mini-brains, which researchers say are truer to life and more cost-effective than similar research models, came about thanks to the son of two Johns Hopkins scientists and two other high school students who were doing summer research internships. They had the idea to make the equipment for growing the mini-brains with a 3-D printer. These so-called bioreactors, and the mini-brains they foster, should open other new and valuable windows into human brain development, brain disorders and drug testing—and perhaps even produce neurons for treatment of Parkinson’s disease and other disorders, the investigators say.
A report on the research appears online April 22 in the journal Cell.

“We have been working for three years to develop a better research model of brain development, and it’s fortunate we can now use this one to shed light on the major public health crisis posed by Zika infections,” says Hongjun Song, PhD , professor of neurology and neuroscience at the Johns Hopkins University School of Medicine’s Institute for Cell Engineering. “This more realistic, 3-D model confirms what we suspected based on what we saw in a two-dimensional cell culture: that Zika causes microcephaly—abnormally small brains and heads—mainly by attacking the neural progenitor cells that build the brain and turning them into virus factories.” 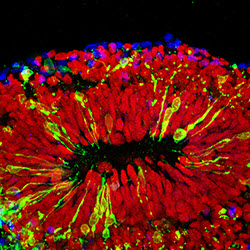 A mini-brain infected with Zika virus. The virus is shown in green, vulnerable neural progenitor cells are shown in red, and neurons are shown in blue.Image credit: Xuyu Qian/Johns Hopkins MedicineIn recent years, researchers in various fields have begun to grow tiny organs from human stem cells to get a better view of development and disease, and speed the search for new drugs. But existing techniques for creating and working with mini-brains were limiting because of the organ’s complexity, Song says. Though the mini-brains themselves are about the size of a pinhead, the bioreactors where they grew were comparatively large, about the size of a soda can. That made working with the mini-brains expensive, given the high cost of the nutrients needed to cultivate human stem cells in the lab, he says, as well as the expense of chemical growth factors that guide the tissue to organize itself like a real brain. Few labs could afford to grow enough mini-brains to be useful for research, Song says, and those that did produced tissues with cells specialized for different parts of the brain mixed together at random.
Song and his wife and research partner, Guo-li Ming, MD, PhD, professor of neurology, neuroscience, and psychiatry and behavioral sciences, found a way to improve the bioreactors from an unexpected source: their son and two other high school students, from New York and Texas, who spent a summer working in the lab. The students had worked with 3-D printers and thought they could be the key to producing a better bioreactor, one that would fit over commonly used 12-well laboratory plates and spin the liquid and cells inside at just the right speed to allow the cells to form brains.
Of course, it wasn’t that simple, Song says. Graduate student Xuyu Qian and postdoctoral fellow Ha Nam Nguyen, PhD, spent years determining factors such as what that optimum speed was, as well as which chemicals and growth factors should be added at what times to yield the desired result.

The group has so far used the new bioreactor, dubbed SpinΩ, to make three types of mini-brains mimicking the front, middle and back of a human brain. They used the forebrain, the first mini-brain with the six layers of brain cell types found in the human cortex, for the current study on Zika.
“One thing the mini-brains allowed us to do was to model the effects of Zika virus exposure during different stages of pregnancy,” says Ming. “If infection occurred very early in development, the virus mostly infected the mini-brains’ neural progenitor cells, and the effects were very severe. After a while, the mini-brains would stop growing and disintegrate. At a later stage, mimicking the second trimester, Zika still preferentially infected neural progenitor cells, but it also affected some neurons. Growth was slower, and the cortex was thinner than in noninfected brains.”
These different effects correspond to what clinicians have seen in infants born to women who contracted Zika during pregnancy, as well as miscarriages, she notes, namely that the earlier in pregnancy Zika infection occurs, the more severe its effects.
The research group’s next step will be to test drugs already FDA-approved for other conditions on the mini-brains to see whether one might provide some protection against Zika. And they included 3-D printing files for SpinΩ in the new paper so that researchers anywhere can print their own bioreactors with just a few hundred dollars in materials. Song says one possible future use could be to grow so-called dopaminergic neurons for transplant, to replace those that die off in Parkinson’s disease. “This is the next frontier of stem cell biology,” he says.
Other authors on the paper are Mingxi M. Song of Riverhill High School; Christopher Hadiono of Byram Hills High School; William Jeang of Clear Lake High School; Sarah C. Ogden, Christy Hammack and Hengli Tang of Florida State University; Bing Yao, Li Lin, Yujing Li, Hao Wu and Peng Jin of Emory University; Gregory Hamersky and Brady J. Maher of the Lieber Institute for Brain Development; Fadi Jacob, Chun Zhong, Ki-jun Yoon, Jai Thakor, Daniel Berg, Ce Zhang, Eunchai Kang, Michael Chickering, David Naeun Zhexing Wen and Kimberly M. Christian of The Johns Hopkins University; Cheng-Ying Ho of George Washington University; and Pei-Yong Shi of the University of Texas Medical Branch.
This work was supported by grants from the National Institute of Neurological Disorders and Stroke (grant numbers NS048271 NS095348, NS047344, NS051630 and NS079625), the National Institute of Allergy and Infectious Disease (grant numbers AI119530 and AI111250), the National Institute of Mental Health (grant numbers MH102690, MH104593 and MH105128), the National Institute of Environmental Health Sciences (grant number ES021957), the Maryland Stem Cell Research Fund and the Simons Foundation Autism Research Initiative (grant number 308988). Guo-li Ming and Hongjun Song are members of the Kavli Neuroscience Discovery Institute.