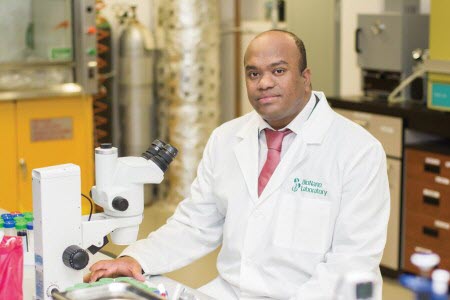 The use of soy isoflavones and peptides to reduce microbial contamination could benefit the food industry, which currently uses synthetic additives to protect foods, says engineering professor Suresh Neethirajan, director of the BioNano Laboratory.

U of G researchers used microfluidics and high-throughput screening to run millions of tests in a short period.

They found that soy can be a more effective antimicrobial agent than the current roster of synthetic chemicals.

The study is set to be published in the journal Biochemistry and Biophysics Reports this summer and is available online now.

“Heavy use of chemical antimicrobial agents has caused some strains of bacteria to become very resistant to them, rendering them ineffective for the most part,” said Neethirajan.

“Soy peptides and isoflavones are biodegradable, environmentally friendly, and non-toxic. The demand for new ways to combat microbes is huge, and our study suggests soy-based isoflavones and peptides could be part of the solution.”

Neethirajan and his team found soy peptides and isoflavones limited growth of some bacteria, including Listeria and Pseudomonas pathogens.

“The really exciting thing about this study is that it shows promise in overcoming the issue of current antibiotics killing bacteria indiscriminately, whether they are pathogenic or beneficial. You need beneficial bacteria in your intestines to be able to properly process food,” he said.

Peptides are part of proteins, and can act as hormones, hormone producers or neurotransmitters. Isoflavones act as hormones and control much of the biological activity on the cellular level.

North America has one of the safest food sources in the world, said Neethirajan, but the United States Centers for Disease Control and Prevention estimates that about 48 million people in the U.S. suffer from some sort of food-borne illness every year.

Related Article: New Knowledge on How to Keep Pathogens, Pests from Traveling with Grain

“In addition, some people are worried about the potential for long-term illnesses resulting from the use of synthetic chemicals,” Neethirajan said.

“The use of soy peptides and isoflavones could combat bacteria and reduce these concerns.”

The next step is for researchers to conduct large-scale tests, Neethirajan said.

“We’ve created a recipe for this to go ahead. This could be very beneficial to food processors, as well as the farmers who grow soybeans.”