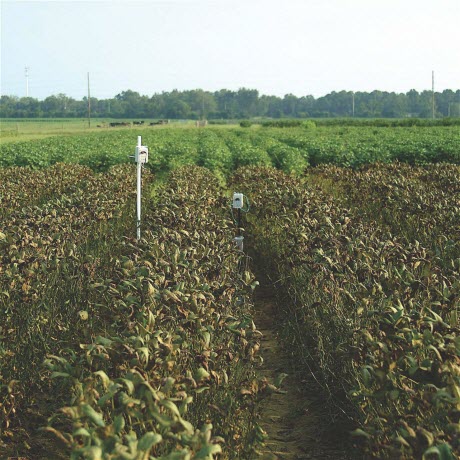 Soybean rust is a fungal disease that affects soybeans in the southern US, where it overwinters and creeps northward during the growing season. A new University of Illinois study explains short-distance transport, but has implications for long-distance spread.Photo credit: Glen HartmanURBANA, Ill. - Although Midwestern soybean growers have yet to experience the brunt of soybean rust, growers in the southern United States are very familiar with the disease. Every year, the fungus slowly moves northward from its winter home in southern Florida and the Gulf Coast states, and eventually reaches Illinois soybean fields—often just before harvest.

Research shows there is a possibility the disease could jump much longer distances and reach the Midwestern soybean crop earlier in the growing season. Studies suggest that air masses moving from the south could sweep up rust spores from infected plants (kudzu or soybean) and transport them hundreds of miles north earlier in the season, potentially endangering the Midwestern soybean crop.

This could be happening right now as the storm system that created Hurricane Harvey moves north, according to Glen Hartman, a USDA Agricultural Research Service plant pathologist and professor in the Department of Crop Sciences at the University of Illinois. After all, hurricanes have been responsible for long-distance movement of rust spores in the past; scientists think Hurricane Ivan brought soybean rust to the United States from Colombia in 2004.

It is this short-distance movement that intrigues Hartman; he says predictions of long-distance spread haven't taken real-world spore movement into account. Without knowing the number of rust spores that actually escape from the canopy and the conditions that favor spore dispersal, long-distance spread models could be inaccurate. So, in a recent study, Hartman and his colleagues placed two kinds of spore-collecting traps in, around, and above rust-infected soybean fields in Alabama, Georgia, and Florida. The team also measured environmental data, including air temperature, relative humidity, wind speed and direction, precipitation, and leaf wetness.

The majority of spores stayed within the canopy, but a proportion (one-third to one-half) floated above. Spores moved laterally away from the field, too, but most stayed within 50 feet, with about half as many moving out to 200 feet.

These numbers explain how short-distance spread of this disease typically works. Rust might spread within a field, then jump to a nearby patch of its alternative host, kudzu. Considering how much kudzu is spread around the south, it's a good bet another soybean field is within a couple hundred feet. From there, it jumps again, moving incrementally to the north. In an average summer, Hartman says, soybean rust rolls up from the south at a rate of about 30 miles a day.

"What really drives local infection is humidity and moisture," Hartman says. "Those are good conditions for fungal infection and production of spores. When it rains, it washes the spores out of the leaf lesions, so they're not available for long-distance transport. But then the fungus just forms new spores that are ready for transport on a dry and windy day."

The study explains short-distance transport, but how do the results inform predictions of long-distance movement?

"I think the study gives a good idea of rust spore counts in the atmosphere in and above the soybean canopy and a distance away from an infected field. There is a lot of variation in the number of spores in that air space," Hartman says. "If you think of the airspace beyond the field, the dilution factor is huge."

In other words, the chances of spores making it out of the canopy and picked up by updrafts for long-distance movement might be lower than assumed. And the chances are lower still if you consider what it's like for spores to survive in high-elevation air currents.

"Spores in these high-elevation air masses are exposed to temperature extremes and to UV radiation. Not many spores survive that, although those that are darkly pigmented may have a better chance. Soybean rust spores have very little pigment, and lightly pigmented spores are very susceptible to UV," Hartman says. 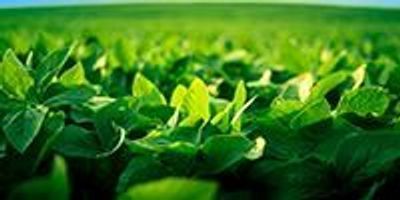 Synchrotron Science Could Give Soybeans a Boost

Synchrotron Science Could Give Soybeans a Boost