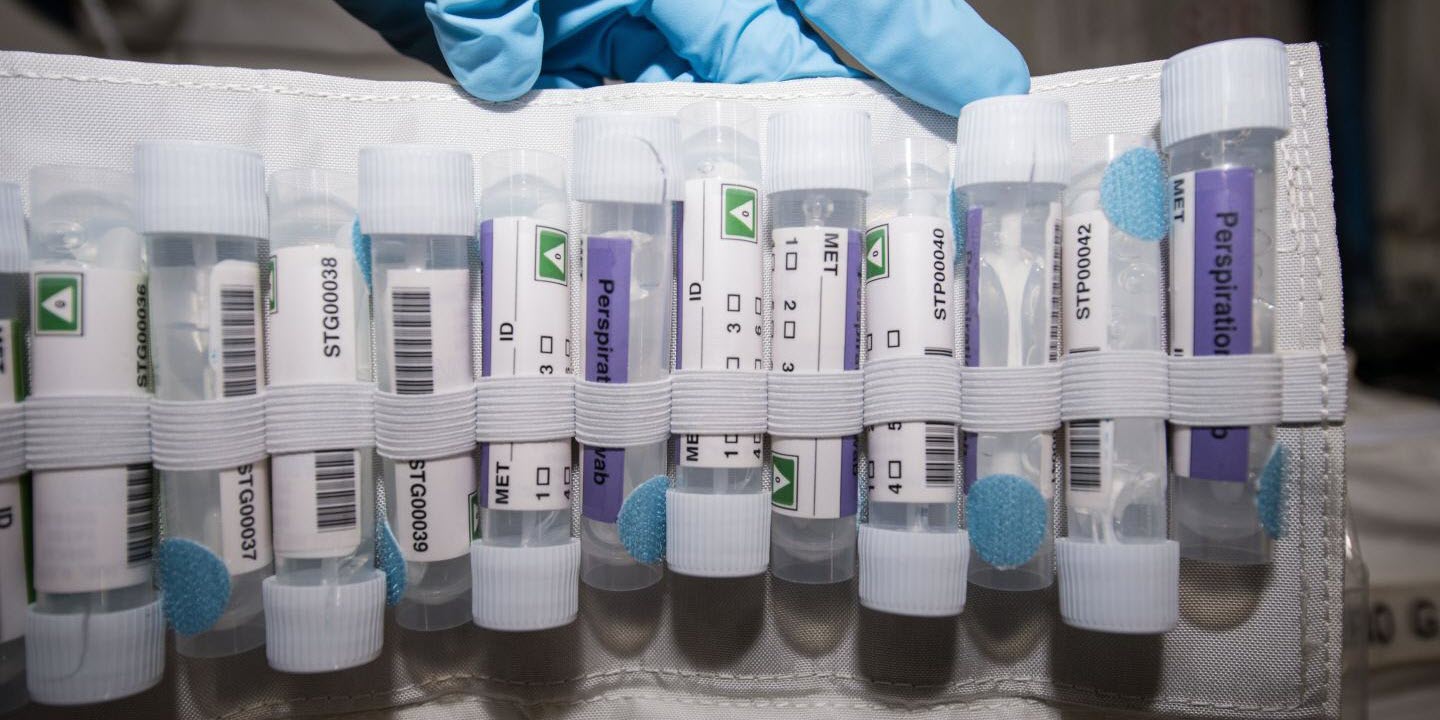 A section of the Microbiome swab kit containing microbiome samples from various physical surfaces is shown prior to being stowed for return to Earth. The Microbiome experiment studied the impact of space travel on both the human immune system and an individual's microbiome (the collection of microbes that live in and on the human body at any given time).
NASA

We all carry around our own microbiome, a world of microorganisms that live on our skin and in our bodies, playing important roles in maintaining health as we interact with the rest of the world. Everywhere we go, our microbiome interacts with the microbiomes of new environments and of the people we meet (see Microbiology 101: Where People Go, Microbes Follow).

Researchers wanted to determine how the unique conditions experienced during long duration space travel affect astronaut microbiomes. A June 2019 journal article in Scientific Reports discusses the results of Microbiome, a multi-year study into the microorganisms living on and in individual astronauts with long duration stays on the International Space Station.

"Since the station is a very clean environment, we were expecting reduced gut diversity in space compared to preflight or postflight because the astronauts are less exposed to environmental bacteria. While the food they eat is not sterile, it does have a very low bacterial load," said Hernan Lorenzi, PhD, principal investigator of the study and a researcher from the Department of Infectious Diseases, J. Craig Venter Institute in Rockville, Maryland.

Surprisingly, gut microbiomes of most of the astronauts became more diverse in space rather than less, despite the limited exposure to new bacteria. This result is important because greater diversity is generally better for overall health.

"Usually when someone has a disease such as inflammatory bowel disease, you would see a reduction in diversity in the gut microbiome. Increased diversity usually indicates greater resistance to disease," said Lorenzi.

Researchers theorize that the increased diversity in the gut microbiome may result from the wide variety of foods available on station. NASA food scientists work closely with astronauts to focus on dietary balance, providing more than 200 food and drink options to ensure crew members have the opportunity to consume diverse foods, perhaps even more so than many individuals typically eat on Earth.

Unlike the gut, astronauts' skin microbiomes showed mixed results, with skin diversity going up for some astronauts and down for others. The consistent result was a reduction in one specific microbe.

"We identified changes in the skin microbiome very early during the mission, and the change that we observed, independent of other changes in diversity, was a significant reduction in a type of bacteria that's called proteobacteria," said Lorenzi. "More specifically, two subtypes of proteobacteria, called beta and gamma proteobacteria."

Previous research has shown that having these types of bacteria on the skin corresponds with protection from hypersensitive skin reactions, such as rashes. In space, these protective microbes are quickly depleted on the astronauts' skin, which might be related to the higher likelihood of skin rashes and hypersensitivity episodes astronauts experience.

Understanding more about why this change occurs would clarify the possible approaches to prevention or treatment. One possibility has to do with the normal source of these types of microbes.

"This type of proteobacteria is found in very high quantities in soil. Since the space station is a non-green environment that stays very clean, it is possible that the reduction in contact with Earth environmental bacteria reduces these microbes on the skin," said Lorenzi.

A second possible explanation relates to the changing structure of the skin itself. Proteobacteria tend to remain closer to the surface, so if astronauts' skin sheds more rapidly, the proteobacteria could be removed.

Lorenzi recommended follow-on studies to identify and test potential treatments to improve astronaut skin health such as a topical cream with probiotics.

The Microbiome investigation findings are further confirmed by the work done on the Microbial Tracking-2 research. That study's findings appeared April 29, 2020, in the journal PLOS One and are described in a related article.

Continuing to learn about how communities of microbes interact in space helps researchers know more about how to keep astronauts healthy and prepare for eventual long duration missions to the Moon and Mars.