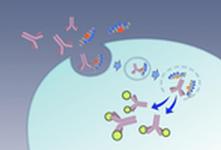 Researchers re-engineer spider venom so that endosomes can deliver its cargo more effectively within cells.Image Credit: Kyoto UniversityOur cells are rich in proteins which are potential targets for therapy. But study of these proteins' behavior, using externally delivered biomacromolecules, has often been stymied by the difficulty of gaining access to the interiors of living cells.

Now scientists at Kyoto University have used a reengineered spider venom peptide to deliver biomacromolecules—such as an antibody—into a cell. Their strategy, appearing in Nature Chemistry, not only allows researchers to track the antibodies visually, but also makes it possible for the antibodies to interact with target proteins, modulating their functions.

"Efficient labeling of intracellular proteins with antibodies allows us to dramatically improve our understanding of their behavior and significance," explains first author Misao Akishiba. "Cells can take in antibodies through membrane-bound vesicles called 'endosomes'. But normally once inside these endosomes, the antibodies have trouble escaping."

The researchers found that a simple redesign of spider venom peptide 'M-lycotoxin' enables the efficient release of antibodies from their endosome cages.

"We took M-lycotoxin and replaced a leucine residue with glutamic acid, which we then called 'L17E'," continues Akishiba. "When L17E enters the cell, it specifically interacts with endosome membranes, breaking them down and releasing the antibodies."

The research team then showed that functional antibodies, such as those involved in suppressing gene expression, could be delivered as well.

"This will benefit not only basic science, but also the development of new treatments and drugs," concludes team leader Shiroh Futaki. "Moreover, this tool could potentially be used to transport other bioactive macromolecules -- and even nanoparticles -- into cells."

As a next step, the researchers hope to improve the efficiency of macromolecule uptake by endosomes, thereby increasing the amount of cargo that can be transported.