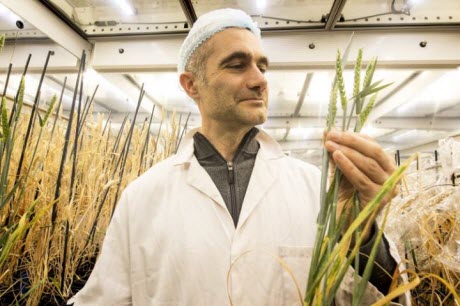 Speed breeding means that it is now possible to grow as many as six generations of wheat every year—a threefold increase on the techniques currently used by breeders and researchers.Photo credit: John Innes CentreSpeed breeding technique sows seeds of new green revolution

Pioneering new technology is set to accelerate the global quest for crop improvement in a development which echoes the Green Revolution of the post war period.

The speed breeding platform developed by teams at the John Innes Centre, University of Queensland, and University of Sydney, uses a glasshouse or an artificial environment with enhanced lighting to create intense day-long regimes to speed up the search for better performing crops.

Using the technique, the team has achieved wheat generation from seed to seed in just eight weeks. These results appear today in Nature Plants.

This means that it is now possible to grow as many as six generations of wheat every year—a threefold increase on the shuttle-breeding techniques currently used by breeders and researchers.

Dr. Brande Wulff of the John Innes Centre, Norwich, a lead author on the paper, explains why speed is of the essence:

"Globally, we face a huge challenge in breeding higher yielding and more resilient crops. Being able to cycle through more generations in less time will allow us to more rapidly create and test genetic combinations, looking for the best combinations for different environments."

For many years the improvement rates of several staple crops have stalled, leading to a significant impediment in the quest to feed the growing global population and address the impacts of climate change.

"People said you may be able to cycle plants fast, but they will look tiny and insignificant, and only set a few seed. In fact, the new technology creates plants that look better and are healthier than those using standard conditions. One colleague could not believe it when he first saw the results."

The exciting breakthrough has the potential to rank, in terms of impact, alongside the shuttle-breeding techniques introduced after the second world war as part of the green revolution.

Dr. Wulff goes on to say: "I would like to think that in 10 years from now you could walk into a field and point to plants whose attributes and traits were developed using this technology."

This technique uses fully controlled growth environments and can also be scaled up to work in a standard glass house. It uses LED lights optimised to aid photosynthesis in intensive regimes of up to 22 hours per day.

LED lights significantly reduce the cost compared to sodium vapour lamps which have long been in widespread use but are ineffective because they generate much heat and emit poor quality light.

The international team also prove that the speed breeding technique can be used for a range of important crops. They have achieved up to six generations per year for bread wheat, durum wheat, barley, pea, and chickpea; and four generations for canola (a form of rapeseed). This is a significant increase compared with widely used commercial breeding techniques.

Speed breeding, when employed alongside conventional field-based techniques, can be an important tool to enable advances in understanding the genetics of crops.

"Speed breeding as a platform can be combined with lots of other technologies such as CRISPR gene editing to get to the end result faster," explains Dr. Lee Hickey from the University of Queensland.

The study shows that traits such as plant pathogen interactions, plant shape and structure, and flowering time can be studied in detail and repeated using the technology.

The speed breeding technology has been welcomed by wheat breeders who have become early adopters.

Ruth Bryant, Wheat Pathologist at RAGT Seeds Ltd, Essex, UK, said: "Breeders are always looking for ways to speed up the process of getting a variety to market so we are really interested in the concept of speed breeding. We are working closely with Dr. Wulff's group at the John Innes Centre to develop this method in a commercial setting."

Dr. Allan Rattey, a wheat crop breeder with Australian company Dow AgroSciences, has used the technology to breed wheat with tolerance to pre-harvest sprouting (PHS) a major problem in Australia.

"Environmental control for effective PHS screening and the long time taken to cycle through several cycles of recurrent selection were major bottle necks. The speed breeding and targeted selection platform have driven major gains for both of these areas of concerns."