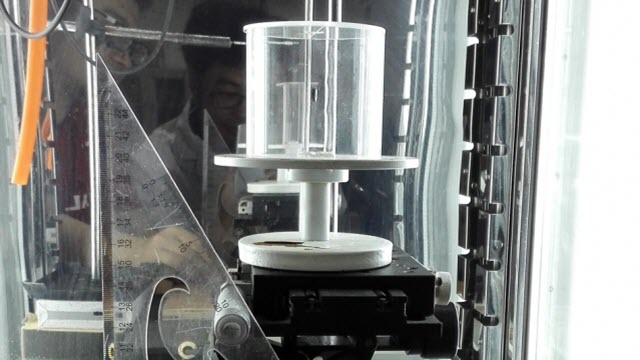 The experimental setup used to study the behavior of spider dragline silk. The cylindrical chamber at center allowed for precise control of humidity while testing the contraction and twisting of the fiberCredit: MIT

Spider silk, already known as one of the strongest materials for its weight, turns out to have another unusual property that might lead to new kinds of artificial muscles or robotic actuators, researchers have found.

The resilient fibers, the team discovered, respond very strongly to changes in humidity. Above a certain level of relative humidity in the air, they suddenly contract and twist, exerting enough force to potentially be competitive with other materials being explored as actuators—devices that move to perform some activity such as controlling a valve.

The findings are being reported in the journal Science Advances, in a paper by MIT professor Markus Buehler, head of the Department of Civil and Environmental Engineering, along with former postdoc Anna Tarakanova and undergraduate student Claire Hsu at MIT; Dabiao Liu, an associate professor at Huazhong University of Science and Technology in Wuhan, China; and six others.

Researchers recently discovered a property of spider silk called supercontraction, in which the slender fibers can suddenly shrink in response to changes in moisture. The new finding is that not only do the threads contract, they also twist at the same time, providing a strong torsional force. “It’s a new phenomenon,” Buehler says.

“We found this by accident initially,” Liu says. “My colleagues and I wanted to study the influence of humidity on spider dragline silk.” To do so, they suspended a weight from the silk to make a kind of pendulum, and enclosed it in a chamber where they could control the relative humidity inside. “When we increased the humidity, the pendulum started to rotate. It was out of our expectation. It really shocked me.”

The team tested a number of other materials, including human hair, but found no such twisting motions in the others they tried. But Liu said he started thinking right away that this phenomenon “might be used for artificial muscles.”

“This could be very interesting for the robotics community,” Buehler says, as a novel way of controlling certain kinds of sensors or control devices. “It’s very precise in how you can control these motions by controlling the humidity.”

“This is a fantastic discovery because the torsion measured in spider dragline silk is huge, a full circle every millimeter or so of length,” says Pupa Gilbert, a professor of physics, chemistry, and materials science at the University of Wisconsin at Madison, who was not involved in this work. Gilbert adds, “This is like a rope that twists and untwists itself depending on air humidity. The molecular mechanism leading to this outstanding performance can be harnessed to build humidity-driven soft robots or smart fabrics.”

Spider silk is already known for its exceptional strength-to-weight ratio, its flexibility, and its toughness, or resilience. A number of teams around the world are working to replicate these properties in a synthetic version of the protein-based fiber.

While the purpose of this twisting force, from the spider’s point of view, is unknown, researchers think the supercontraction in response to moisture may be a way to make sure a web is pulled tight in response to morning dew, perhaps protecting it from damage and maximizing its responsiveness to vibration for the spider to sense its prey.

“We haven’t found any biological significance” for the twisting motion, Buehler says. But through a combination of lab experiments and molecular modeling by computer, they have been able to determine how the twisting mechanism works. It turns out to be based on the folding of a particular kind of protein building block, called proline.

Investigating that underlying mechanism required detailed molecular modeling, which was carried out by Tarakanova and Hsu. “We tried to find a molecular mechanism for what our collaborators were finding in the lab,” Hsu explains. “And we actually found a potential mechanism,” based on the proline. They showed that with this particular proline structure in place, the twisting always occurred in the simulations, but without it there was no twisting.

“Spider dragline silk is a protein fiber,” Liu explains. “It’s made of two main proteins, called MaSp1 and MaSp2.” The proline, crucial to the twisting reaction, is found within MaSp2, and when water molecules interact with it they disrupt its hydrogen bonds in an asymmetrical way that causes the rotation. The rotation only goes in one direction, and it takes place at a threshold of about 70 percent relative humidity.

“The protein has a rotational symmetry built in,” Buehler says. And through its torsional force, it makes possible “a whole new class of materials.” Now that this property has been found, he suggests, maybe it can be replicated in a synthetic material. “Maybe we can make a new polymer material that would replicate this behavior,” Buehler says.

“Silk’s unique propensity to undergo supercontraction and exhibit a torsional behavior in response to external triggers such as humidity can be exploited to design responsive silk-based materials that can be precisely tuned at the nanoscale,” says Tarakanova, who is now an assistant professor at the University of Connecticut. “Potential applications are diverse: from humidity-driven soft robots and sensors, to smart textiles and green energy generators.”

It may also turn out that other natural materials exhibit this property, but if so this hasn’t been noticed. “This kind of twisting motion might be found in other materials that we haven’t looked at yet,” Buehler says. In addition to possible artificial muscles, the finding could also lead to precise sensors for humidity.

These researchers “have used silk’s known high sensitivity to humidity and demonstrated that it can also be used in an interesting way to create very precise torsional actuators,” says Yonggang Huang, a professor of civil and environmental engineering and mechanical engineering at Northwestern University, who was not involved in this work. “Using silk as a torsional actuator is a novel concept that could find applications in a variety of fields from electronics to biomedicine, for example, hygroscopic artificial muscles and humidity sensors,” he says.

Huang adds, “What is particularly noteworthy about this work is that it combines molecular modeling, experimental validation, and a deep understanding by which elementary changes in chemical bonding scale up into the macroscopic phenomena. This is very significant from a fundamental science point of view, and also exciting for applications.”