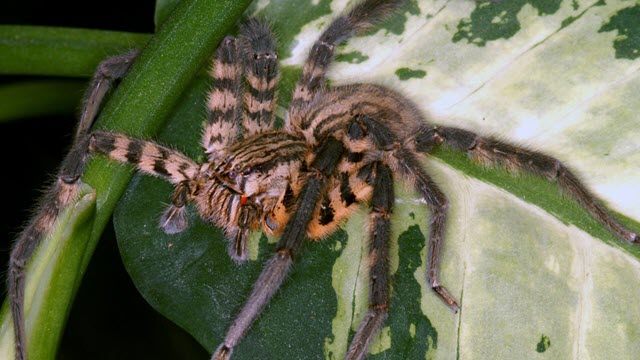 The wandering spider Cupiennius salei from Central America has a legspan of approximately 10 centimetersCREDIT: Institute of Ecology and Evolution, University of Bern

Over the past decades, the research of spider venom mainly focused on the neurotoxins it contains. This involved understanding the paralyzing and toxic effect of individual components of the venom on arthropods and vertebrates. Researchers all over the world were successful in identifying neurotoxins and their effects. These findings were intended to be used for combating diseases of the nervous system. So far, the development of new insecticides has been particularly successful. However, the great complexity of spider venoms, which goes far beyond the pure neurotoxins, has long been disregarded. Under the direction of Lucia Kuhn-Nentwig and Wolfgang Nentwig, researchers of the Institute of Ecology and Evolution (IEE) of the University of Bern recently published an article in the journal Toxins that gives an overview of many years of research on various components of spider venom. The study shows that spider venom causes manifold interactions in the spiders' preys.

Researchers of the IEE examine the spider venom in the laboratory using the example of the venom of the wandering spider Cupiennius salei. These spiders from Central America have a legspan of approximately 10 centimeters and do not produce a web for trapping prey. Researchers use the term dual prey-inactivation strategy for describing the complex effect mechanism of the venom. This strategy contains a specific, neurotoxic part as well as a nonspecific, metabolic part. "Both parts of the strategy interact very closely. The venom targets not only the muscles and the nervous system of the prey; the internal homeostasis, the physiological balance of an organism, is also disrupted by the blockade of ion channels and various metabolic pathways," Lucia Kuhn-Nentwig explains.

There are multiple synergistic interactions between the components of the venom. The toxic components, for example, attack the muscles and the nervous system which leads to cramps and paralysis. Furthermore, the internal tissue of the prey is destroyed, which facilitates the spread of the venom and causes pain and inflammation over the long term. On the other hand, other components affect the energy balance and increase blood sugar, which considerably disturbs the prey's bodily functions. In terms of effect, the main components of the venom are efficiently linked with each other as well as with various metabolic pathways. "This dual prey-inactivation strategy is very effective and reduces the risk of the spider losing the prey as well as the risk of potential prey developing a resistance to spider venom in the long run," Lucia Kuhn-Nentwig says.

"An entire armada of substances"

In order to better understand spider venom, the scientist and her colleagues investigated all RNA molecules produced in the venom glands (the so-called transcriptome). The identification of α-amylase as the main protein in spider venom was a key moment for the researchers. "Based on this, we were in a position to understand the existence of many other peptides and proteins contributing to the toxic effect of spider venom," Kuhn-Nentwig explains.

Even though this principle of the effect of spider venom was developed on one species (Cupiennius salei), it can be generalized for most other species of spiders. Kuhn-Nentwig summarizes: "Spider venom is more than just a toxin—it is an entire armada of substances that attack, paralyze and kill an organism in a maximum of many different ways."