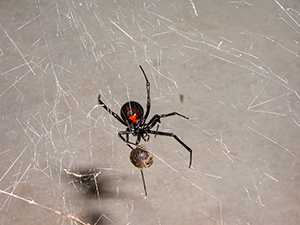 Black widow spider.Image courtesy of the University of Notre DameUsing web samples from black widow spiders fed with crickets, researchers at the University of Notre Dame have successfully used DNA samples to identify both the spider and the species of its prey. Such noninvasive sampling to obtain genetic information could have practical implications in several fields including conservation research and pest management.

As an environmental science student at Notre Dame, Charles Cong Yang Xu said he had the idea of uncovering the DNA of spiders while he was studying environmental DNA of fish in the lab of David Lodge, the Ludmilla F., Stephen J., and Robert T. Galla Professor of Biological Sciences. Xu found a novel and promising noninvasive source of spider and insect DNA through extracting the DNA from spider webs. Using web samples from spiders placed at Potawatomi Zoo in South Bend, Indiana, he then amplified and sequenced mitochondrial DNA from spider web samples, which identified both the spider and the species of the prey.

Spider and prey DNA remained detectable at least 88 days after living organisms were no longer present on the web. “Sticky spider webs may serve as a natural DNA sampling device for DNA from the spider and from what it’s been eating,” Xu said.

Noninvasive genetic sampling such as this enables biomonitoring without the need to directly observe or disturb target organisms. The results from this study can lead to practical applications in conservation research, pest management, biogeography studies and biodiversity assessments.

“Sticky spider webs are natural DNA samplers, trapping nearby insects and other things blowing in the wind,” Xu said. “We see potential for broad environmental monitoring because spiders build webs in so many places.”

A Notre Dame alumnus from the class of 2014, Xu is lead author on the paper. Co-authors are Ivy J. Yen and Cameron R. Turner at Notre Dame and Dean Bowman at Potawatomi Zoo. Their paper, titled “Spider web DNA: A new spin on noninvasive genetics of predator and prey,” has been recently published in PLOS One.