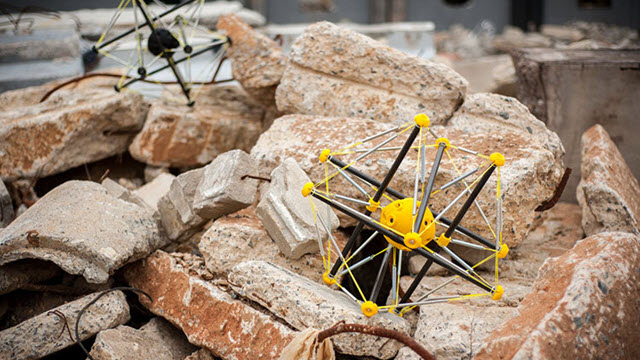 Squishy robots, which can land safely from a 600-foot drop, may help first responders scope out disaster zones without putting human lives at riskCredit: Squishy Robotics

Sometimes the toughest among us come in shapes that are round and just a little bit squishy.

New soccer ball-shaped robots, created by engineers at UC Berkeley and Squishy Robotics, have the remarkable ability to fall from a height of more than 600 feet and be no worse for wear. Built of a network of rods linked by contracting cables, they can also shapeshift in order to crawl from one point to another.

Equipping the robots with sensors and dropping them into disaster zones could provide first responders with critical information about conditions on the ground, such as the presence of poisonous gas, says UC Berkeley mechanical engineering professor Alice Agogino.

"Our rapidly deployable mobile sensor robots are designed to save lives, reduce costs and risks, and increase effectiveness of emergency response," Agogino says. "They can survive a high drop into a disaster zone and provide life-saving information to first responders. They can also work as co-robots with their human partners on the ground when they arrive on the scene."

The team of inventors started designing these "tensegrity" robots—which combine the forces of tension and compression to create stable structures—in collaboration with NASA Ames, in hopes of creating a robot that could safely fall from space to explore Saturn's moon, Titan.

But they soon realized the robots might be even more useful a little closer to home.

"We are still working with NASA on a space probe, but as excited as I am about space robots, I was motivated to apply this technology to Earthly applications when I saw a report by the Red Cross and Red Crescent that 400 first responders lost their lives to save others in the last 20 years. Many of these lives could have been saved with better situational awareness before entering disaster zones," Agogino says. "Our robots get information that first responders need in order to stay safe and respond faster and more effectively."

The team is currently collaborating with the Los Angeles County and the Houston fire departments to beta test the robots in disaster scenarios. The researchers unveiled the robots last week at the Techcrunch Robotics and AI Sessions held at UC Berkeley.