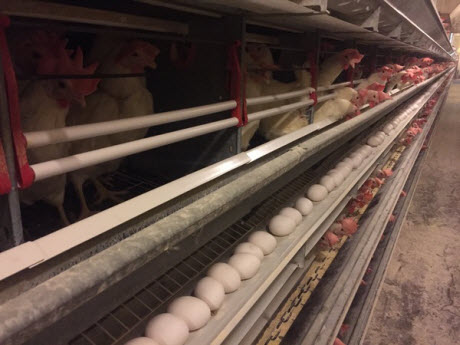 Studies by Mark Cook show that preventing pathogens from shutting down the immune system can block infections in chickens without using antibiotics. Eggs from these Wisconsin hens contained antibodies that were used to test the antibiotic replacement.Photo credit : Mark Staudt, Wisconsin Alumni Research FoundationThe innovation comes as growing public concern about antibiotic resistance has induced McDonald's, Tyson Foods and other industry giants to announce major cuts in antibiotic use in meat production. About 80 percent of antibiotics in the United States are used by farmers, because they both protect against disease and accelerate weight gain in many farm animals.

The overuse of antibiotics in agriculture and medicine has created a public health crisis of drug-resistant infections, such as multidrug resistant staphylococcus aureus (MRSA) and "flesh-eating bacteria."

"You really can't control the bugs forever; they will always evolve a way to defeat your drugs," says Mark Cook, a professor of animal sciences and entrepreneur.

Cook's current work focuses on a fundamental immune "off-switch" called Interleukin 10 or IL-10, manipulated by bacteria and many other pathogens to defeat the immune system during infection. He and animal sciences associate researcher Jordan Sand have learned to disable this switch inside the intestine, the site of major farm animal infections such as the diarrheal disease coccidiosis. 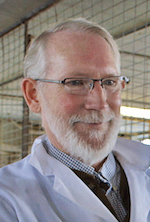 Mark CookPhoto courtesy of the University of Wisconsin-MadisonCook vaccinates laying hens to create antibodies to IL-10. The hens put the antibody in eggs that are then sprayed on the feed of the animals he wants to protect. The antibody neutralizes the IL-10 off-switch in those animals, allowing their immune systems to better fight disease.

In experiments with 300,000 chickens, those that ate the antibody-bearing material were fully protected against coccidiosis.

Smaller tests with larger animals also show promise. Dan Schaefer, a professor of animal science, and his graduate research assistant, Mitch Schaefer, halved the rate of bovine respiratory disease in beef steers by feeding them the IL-10 antibody for 14 days.

"That's a very enticing early result," Dan Schaefer says. "Bovine respiratory disease is the number one health risk for feeder cattle coming into a confinement situation." He is planning a larger trial in collaboration with colleagues at other universities.

In a test in newborn dairy calves, Sheila McGuirk, a professor of medical sciences at the School of Veterinary Medicine, found less than half as much respiratory disease among calves that ate the antibody for 10 days compared to those that did not. The treated calves also showed less shedding of Cryptosporidium parvum, a protozoa that causes diarrhea, although the trend was not statistically significant.

"These diseases cause long-term reproduction, production and growth impairments in livestock," says McGuirk. "The affected animals are suboptimal in health, performance and profitability. To have something affordable, safe and nonantibiotic that controls these very important diseases is absolutely awesome. We are eager to study this further."

In the past few years, scientists have learned that a large group of pathogens — including bacteria, single- and multicelled parasites, protozoa, even certain viruses — make a chemical called macrophage migratory inhibition factor, or MIF, which activates the IL-10 mechanism to shut down the host animal's immune system. "This apparently arose deep in the evolutionary past, and it's wholesale piracy of the immune system," says Sand.

"People have manipulated the immune system for decades, but we are doing it in the gut. Nobody has done that before," Cook says.

Cook and Sand, who have been working on the IL-10 system since 2011, are forming Ab E Discovery LLC to commercialize their research. One of the four patents they have filed through the Wisconsin Alumni Research Foundation has just been granted, and WARF has awarded a $100,000 Accelerator Program grant to the inventors to pursue the antibiotic-replacement technology.

Cook previously founded Isomark LLC, which is developing a technology for early detection of infection in human breath.

The benefits of reducing farm usage of antibiotics should extend to workers' families and the wider population. Significantly more people working in conventional chicken farms carry multidrug-resistant pathogens than those who work in antibiotic-free farms, Sand notes.

A nonantibiotic method to prevent pathogens from shutting down the immune system seems far less conducive to resistance than the current routine feeding of antibiotics, Cook says. "We are not focused on the pathogens. We are focused on what they are trying to do to the immune system. We are getting encouraging data from dairy and beef. We have conducted experiments involving 300,000 chickens in commercial farms, half receiving the product. We know it works. The market is interested, and now it's a matter of making a product."