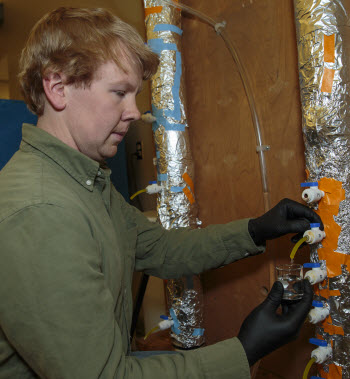 He collaborates with associate professor of agricultural and biosystems engineering and South Dakota State University Extension water management engineer Chris Hay, who has been testing woodchip bioreactors since 2011.

Hay envisions installing a steel-containing cartridge as an add-on to nitrate-capturing bioreactors.

Their research is supported by a U.S. Geological Survey grant through the South Dakota Water Resources Institute with matching funds from the East Dakota Water Development District, SDSU Water and Environmental Engineering Research Center and the Department of Civil and Environmental Engineering. The project, which began in March 2014, has received $140,653 in funding.

"Doing something to address this nutrient-loading issue will help offset some of the negatives," Gilbertson pointed out.

"Phosphates are the leading cause for algae growth in natural water bodies," Hua said. Because dissolved phosphorous is readily available, algae can use it easily, Hay added. In addition to consuming oxygen, some algae species release toxic substances into the water, Hua explained.

In the last decade, more South Dakota farmers have installed tile drainage to increase crop production, particularly in the last five years, Hay explained. Tile drainage generally reduces total phosphorous losses from farmland, which helps reduce phosphorous loading to lakes and streams. However, the drains can still be a source of dissolved phosphorous, which is what this research addresses.

Hua and graduate student Morgan Salo are testing four types of steel byproducts from Sioux Falls machine shops to determine their phosphate removal capacity. When the steel shavings rust, the iron oxides that form on their surfaces react chemically, binding with phosphate ions and thus removing phosphates from the drainage water.

The researchers performed batch adsorption tests to determine the maximum capacity on a per mass basis for each type of steel material. 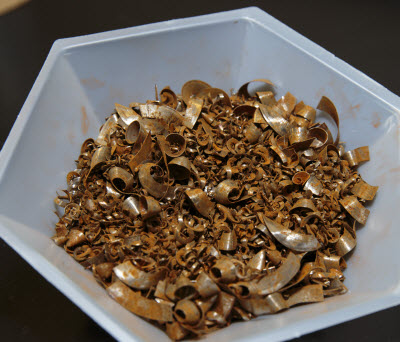 In addition, they are exploring factors such as varying flow-through time and influent nutrient concentrations using the column reactors. The researchers will also conduct batch experiments to determine the impact of pH, temperature and reaction time on adsorption.

In the bioreactor, water will flow through a bed of woodchips first and then a steel-loaded barrel before entering the last control structure, according to Hay. An underground bioreactor in the neighborhood of 15 to 20 feet wide and 100 to 120 feet long can handle the runoff from a 30- to 40-acre field.

The researchers plan to add a phosphorous unit to a woodchip bioreactor at Baltic this fall through funding from the South Dakota Soybean Research and Promotion Council. The goal is to remove 80 to 90 percent of the phosphates and nitrates from the tile drainage water.