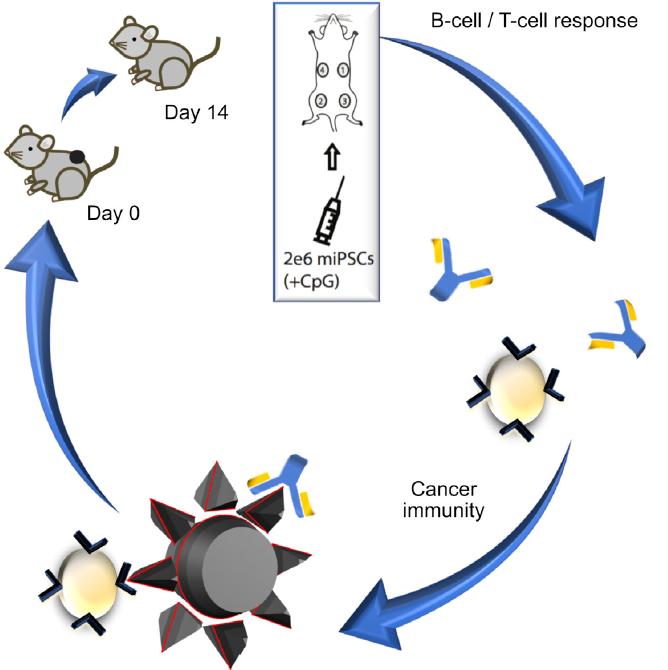 This visual abstract depicts how cancer immunity against multiple types of cancer can be achieved using an easily generable iPSC-based cancer vaccine. This immunity is based on overlapping epitopes between iPSCs and cancer cells and can also be achieved by reactivating the immune system as an adjuvant.Image Source: Kooreman and Kim et al./Cell Stem Cell

iPSCs are generated from adult cells genetically reprogrammed to mimic embryonic stem cells' ability to become any type of cell in the body.

In the study, 75 mice received versions of the iPSC vaccine created from iPSCs that have been inactivated by irradiation. Within four weeks, 70 percent of the vaccinated mice fully rejected newly introduced breast cancer cells, while the remaining 30 percent had significantly smaller tumors. The effectiveness of the iPSC vaccine was also validated for lung and skin cancers.

Lead author Joseph C. Wu at Stanford's Cardiovascular Institute and Institute for Stem Cell Biology and Regenerative Medicine and colleagues found that a large amount of the antigens present on iPSCs are also present on cancer cells. When lab mice were vaccinated with iPSCs, their immune systems built an immune response to the antigens on the iPSCs. Because of key similarities between the iPSCs and cancer cells, the animals simultaneously built an immune response against cancer.

To be effective, anti-cancer vaccines must introduce one or more antigens into the body that activate T cells or produce antibodies capable of recognizing and binding to antigens on the surfaces of cancer cells.

One of the biggest challenges for cancer immunotherapies is the limited number of antigens that can be presented to the immune system at a given time. The Stanford study uses an animal's own cells to create an iPSC-based cancer vaccine that simultaneously targets multiple tumor antigens. Using whole iPSCs eliminates the need to identify the most optimal antigen to target in a particular type of cancer.

"We present the immune system with a larger number of tumor antigens found in iPSCs, which makes our approach less susceptible to immune evasion by cancer cells," Wu says. The researchers also combined iPSCs with an immunity booster—a snippet of bacterial DNA called CpG that has been deemed safe in human trials. Stanford oncologist and study co-author Ronald Levy previously found CpG to be a potent tumor-fighting agent.

In the future, a patient's skin or blood cells may be re-programmed into iPSCs and administered as an anti-cancer vaccine or as a follow-up booster after surgery, chemotherapy, or radiation therapy.

"What surprised us most was the effectiveness of the iPSC vaccine in re-activating the immune system to target cancer," Wu says. "This approach may have clinical potential to prevent tumor recurrence or target distant metastases."