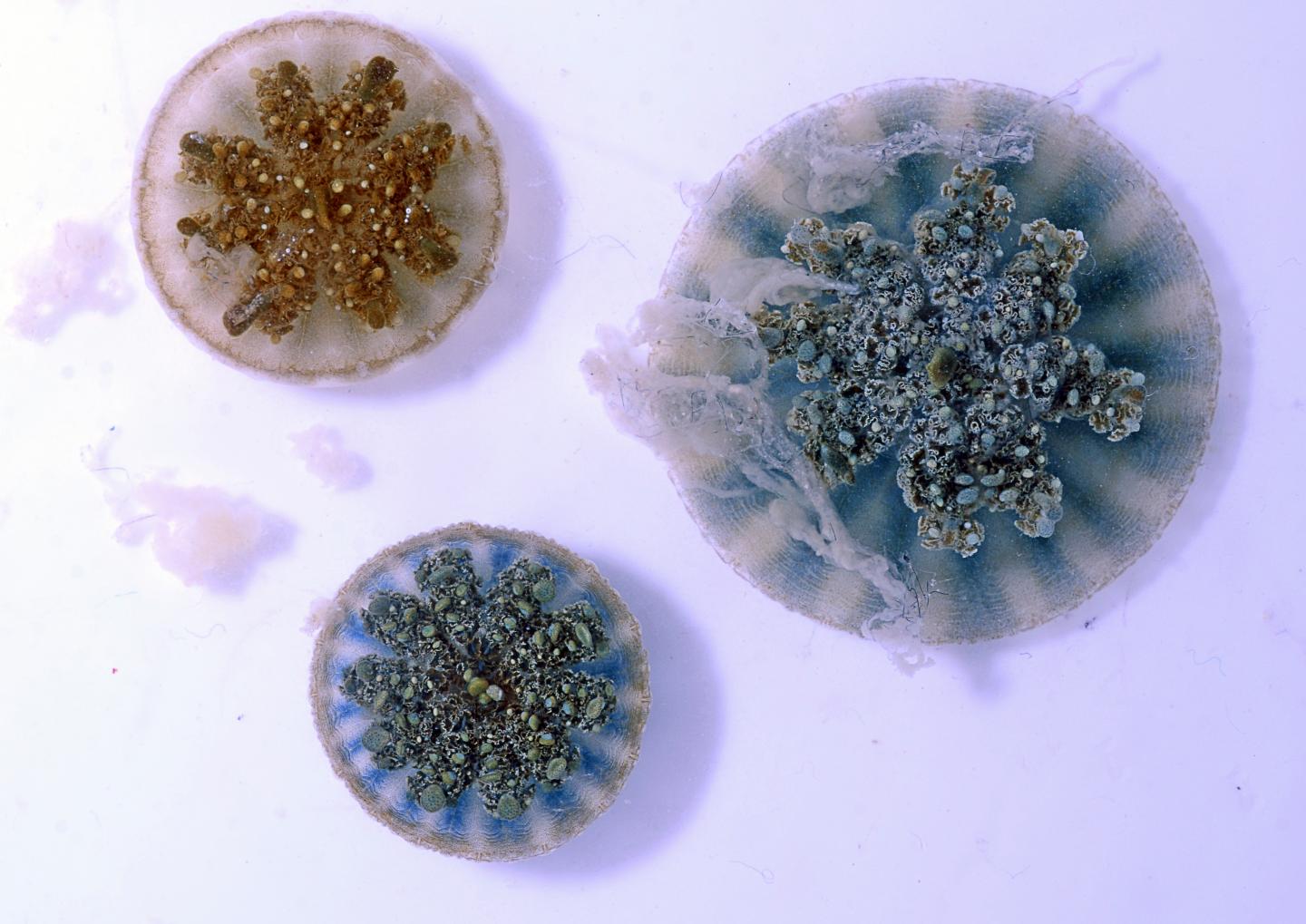 Three Cassiopea, or upside-down jellyfish, from Bonaire, Dutch Caribbean seen from above in the lab at the Department of Invertebrate Zoology in the Smithsonian's National Museum of Natural History. The cloudy matter floating above and to the left of the jellyfish is a mucus that they exude. A team led by scientists at the Smithsonian, the University of Kansas and the US Naval Research Laboratory report in the Feb. 13, 2020 issue of the journal Nature Communications Biology that they have discovered microscopic stinging structures inside the mucus secreted by upside-down jellyfish that cause swimmers and prey to be stung without coming into contact with these jellyfish.
Allen Collins and Cheryl Ames

In warm coastal waters around the world, swimmers can often spot large groups of jellyfish pulsing rhythmically on the seafloor. Unless properly prepared with protective clothing, it is best to steer clear of areas that Cassiopea, or upside-down jellyfish inhabit: getting too close can lead to irritating stings, even without direct contact.

Now, researchers have taken a close look at the cause of the "stinging water" encountered near these placid-looking creatures: a toxin-filled mucus the jellyfish release into the water. In the Feb. 13 issue of the journal Communications Biology, a journal from Nature Research, a team led by scientists at the Smithsonian's National Museum of Natural History, the University of Kansas and the US Naval Research Laboratory reports on microscopic structures they have discovered inside the mucus—gyrating balls of stinging cells that they call cassiosomes.

"This discovery was both a surprise and a long-awaited resolution to the mystery of stinging water," said Cheryl Ames, museum research associate and associate professor at Tohoku University. "We can now let swimmers know that stinging water is caused by upside-down jellyfish, despite their general reputation as a mild stinger." The jellyfish is commonly found in calm, sheltered waters such as lagoons and mangrove forests.

The study, a multidisciplinary exploration of cassiosomes conducted over several years, grew out of the curiosity that Ames, National Oceanic and Atmospheric Administration (NOAA) zoologist Allen Collins and colleagues had about the discomfort they had all experienced firsthand after swimming near upside-down jellyfish. It began when Ames was a graduate student in the invertebrate zoology lab that Collins heads at the museum and culminated when Ames, as a postdoctoral fellow at the US Naval Research Laboratory, investigated the question further as an issue of safety for scientists, the military and recreationists. Initially, Ames said, she and her colleagues were not even sure jellyfish were responsible for their stinging, itching skin, since several other ideas had been put forward about the phenomena, including severed jellyfish tentacles, "sea lice," anemones, and other stinging marine animals. But they knew that the upside-jellyfish in the museum's aquarium-room lab tanks released clouds of mucus when they were agitated or feeding, and they wondered if they might find the culprit there. 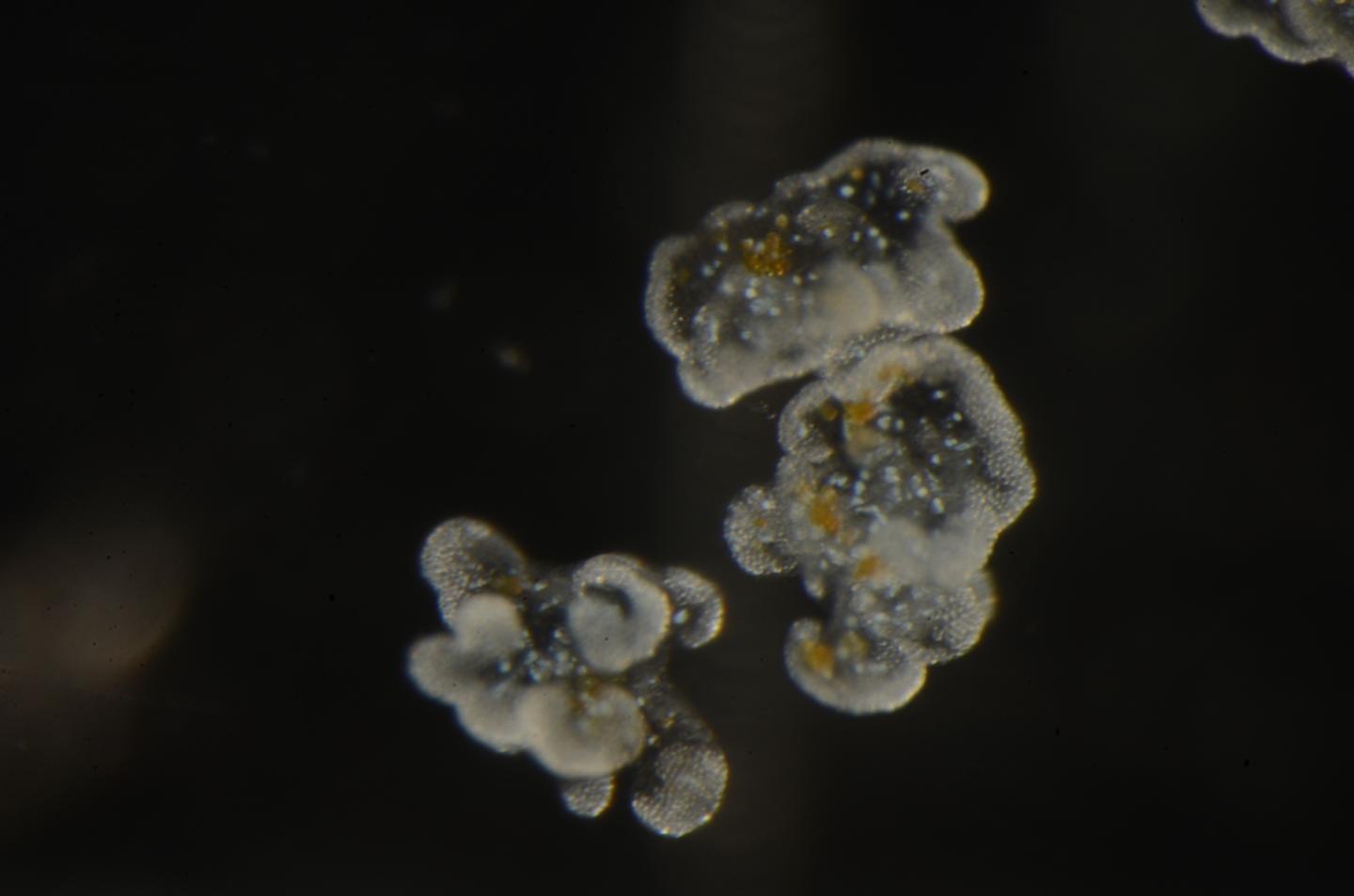 The oval structures along the protruding edges are stinging capsules known as nematocysts, and the brown cells in the interior are symbiotic algae that live within the tissues of Cassiopea, or upside-down jellyfish. A team led by scientists at the Smithsonian's National Museum of Natural History, the University of Kansas and the US Naval Research Laboratory report in the Feb. 13, 2020 issue of the journal Nature Communications Biology that they have discovered microscopic stinging structures inside the mucus secreted by upside-down jellyfish—gyrating balls of stinging cells that they call cassiosomes. These cassiosomes can sting swimmers and prey without coming into contact with the jellyfish themselves.
Cheryl Ames and Anna Klompen

When Ames and Smithsonian interns Kade Muffett and Mehr Kumar first placed a sample of the jellyfish mucus under a microscope, they were surprised to see bumpy little balls spinning and circulating in the slimy substance. Together with Anna Klompen, a graduate student at the University of Kansas and former museum and NOAA fellow, they turned to several more sophisticated imaging methods to examine the mysterious masses closely, and eventually a clearer picture emerged. The bumpy blobs, they discovered, were actually hollow spheres of cells, probably filled with the same jelly-like substance that gives jellyfish their structure. Most of the outer cells were stinging cells known as nematocytes. Other cells were present, too, including some with cilia—waving, hairlike filaments that propel the cassiosomes' movements. Puzzlingly, inside the jelly-filled center of each sphere was a bit of ochre-colored symbiotic algae—the same sort that lives inside the jellyfish itself.

Taking another look at the jellyfish themselves, the team was able to detect cassiosomes clustered into small spoon-like structures on the creatures' arms. When they gently provoked a jellyfish, they could see cassiosomes slowly break away, steadily leaving the appendages until thousands of them mingled with the animal's mucus. They also found that the cassiosomes were efficient killers of lab-fed brine shrimp, and videos that the team produced show tiny crustaceans succumbing quickly to the venomous spheres in the lab. Molecular analyses conducted at the museum and the U.S. Naval Research Laboratory identified three different toxins within the cassiosomes.

While its exact role in the ocean is not yet known, Ames said cassiosome-packed mucus may be an important part of upside-down jellyfishes' feeding strategy. While the photosynthetic algae that live inside upside-down jellyfish provide most of the animals' nutritional resources, the jellyfish likely need to supplement their diet when photosynthesis slows—and toxic mucus appears to keep incapacitated critters close at hand.

"Venoms in jellyfish are poorly understood in general, and this research takes our knowledge one step closer to exploring how jellyfish use their venom in interesting and novel ways," Klompen said.

Collins said the team's discovery was particularly exciting because Cassiopea jellyfish have been recognized for more than 200 years, but cassiosomes have remained unknown until now. "They're not the most venomous critters, but there is a human health impact," he said. "We knew that the water gets stingy, but no one had spent the time to figure out exactly how it happens." Already, the team has identified cassiosomes in four additional closely related jellyfish species, reared at the National Aquarium, and they are eager to learn whether they might be even more widespread.

"This study shows the power of harnessing multi-institution collaboration to solve a problem that has baffled scientists and swimmers around the world," said Gary Vora, deputy laboratory head at the US Naval Research Laboratory. "What stood out most was the team's ability to experimentally pursue where the data was taking us, given the breadth of the tools that were required to come to these conclusions."