ST. LOUIS -- Saint Louis University's vaccine center has been tapped by the National Institutes of Health to conduct a human clinical trial of a vaccine to prevent the Zika virus, which can cause devastating birth defects in babies. 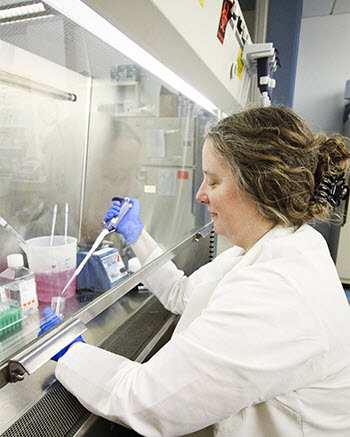 Sarah George, MD, is an infectious diseases researchers who studies viruses spread by mosquitoes.Photo credit: Ellen HuttiThe study, which will not start for several months, will be conducted at SLU's Center for Vaccine Development and at a research site partnering with SLU in Puerto Rico, a territory where local mosquitoes are transmitting Zika virus infection.

Sarah George, MD, a flavivirus expert and associate professor of infectious diseases at SLU is the principal investigator. She calls the research critically important to global health.

"We are seeing widespread Zika in the Americas as well as Puerto Rico," George said.

"As of June, 45 states have reported cases of Zika, contracted by people who have traveled to or have had sexual contact with someone who traveled to places where Zika is circulating locally. We need a vaccine to protect people from this emerging infectious disease that can cause microcephaly and other severe brain defects in babies."

Zika is spread by Aedes mosquitoes, which also transmit dengue and chikungunya viruses. Zika also can be sexually transmitted.

About 80 percent of those who contract Zika have no symptoms. Those who feel sick typically have symptoms such as fever, headache, rash, joint pain, or red eyes that last four to seven days. A small number of those infected develop Guillain-Barre Syndrome, which can cause temporary paralysis.

"This could be similar to what we used to see with rubella (German measles). Frequently women got infected during pregnancy and didn't realize it because their symptoms were so mild. However about a third of their babies had very serious birth defects," George said.

"We developed a vaccine, the MMR vaccine, that is given to children and has virtually eliminated rubella and its associated birth defects. Our hope is a Zika vaccine can accomplish the same goal. By immunizing people early, by the time they're of child-bearing age, they'd have immunity to this virus and it's possible their babies would be protected. However there are a lot of things we don't know about Zika and a lot we are still learning."

SLU is eligible to conduct the research because its VTEU is one of nine elite institutions selected in 2013 by the National Institutes of Health to study vaccines of the future that will protect people from infectious diseases and emerging threats. The project is funded under Contract No. HHSN272201300021I. The federal government has funded vaccine research at SLU since 1989.