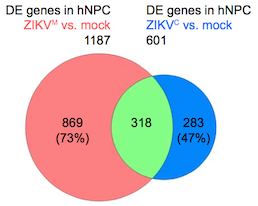 Overlap in gene expression changes when neural progenitor cells are infected by African or Asian strains of Zika virus.Diagram from Nucleic Acids Research via Creative CommonsScientists have revealed molecular differences between how the African and Asian strains of Zika virus infect neural progenitor cells. The results could provide insights into the Zika virus’ recent emergence as a global health emergency, and also point to inhibitors of the protein p53 as potential leads for drugs that could protect brain cells from cell death.

The findings, from the Emory/Johns Hopkins/Florida State team that showed this spring that neural progenitor cells are particularly vulnerable to Zika infection, were published last week in Nucleic Acid Research. The paper was also posted on BioRxiv before publication.

Zika virus was first discovered in Uganda in the 1940s, and two distinct lineages of Zika diverged sometime in the second half of the 20th century: African and Asian. The strains currently circulating in the Western Hemisphere, which have been linked to microcephaly in infants and Guillain Barre syndrome in adults, are more closely related to the Asian lineage.

The research team catalogued and compared genes turned on and off by Asian and African strains of Zika virus, as well as dengue virus, in human neural progenitor cells. The authors describe dengue as inducing more robust changes in gene expression than either strain of Zika. Although they show that dengue can infect neural progenitor cells like Zika can, dengue infection does not stunt the cells’ growth or lead to cell death.

"This shows that the differences between Zika and dengue are not at the level of being able to infect neural progenitors, but more about the harm Zika causes when it does infect those cells," says senior author Peng Jin, PhD, professor of human genetics at Emory University School of Medicine.

Zika induced changes that were more focused on genes involved on DNA replication and repair, indicating that Zika infection disrupts cell replication more. Zika and dengue are genetically related, and both viruses are transmitted by mosquitos. Dengue infection, which mainly affects cells in the blood, can lead to neurological complications. But it has not been associated with birth defects such as microcephaly in the same way Zika has.

In comparison with African strains, infection by the Asian strain of Zika virus more potently affected the p53 gene and genes connected with cells’ responses to viral infection, such as interferons. Both Zika strains were able to infect and cause cell death in neural progenitor cells.

P53, often mutated in cancer cells, is known as "guardian of the genome," because it can promote DNA repair or arrest growth in response to DNA damage. The researchers tested whether pifithrins, compounds identified as inhibitors of p53, can protect neural cells from being killed by Zika infection. They can, although Jin cautions that pifithrins’ activity against Zika has not been tested in living animals.

"The p53 pathway could potentially be targeted with other compounds that are well tolerated in humans," he says.

The neural progenitor cells used were derived from iPSCs (induced pluripotent stem cells), which were in turn derived from donor skin cells. The research at Emory was supported by the National Institute of Neurological Disorders and Stroke (NS079625) and the Emory Genetics Discovery Fund.