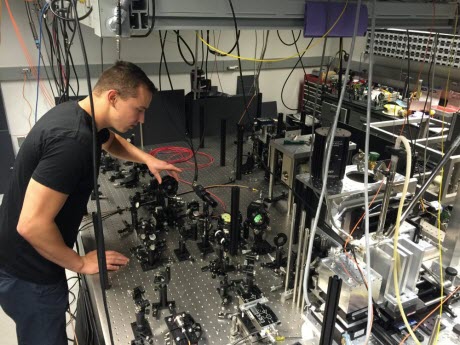 Paul Klimov, a graduate student in the Institute for Molecular Engineering, adjusts the intensity of a laser beam during an experiment. Because the laser light lies within the infrared spectrum, it is invisible to the human eye.Photo courtesy of Awschalom GroupEntanglement is one of the strangest phenomena predicted by quantum mechanics, the theory that underlies most of modern physics: It says that two particles can be so inextricably connected that the state of one particle can instantly influence the state of the other—no matter how far apart they are.

A century ago, entanglement was at the center of intense theoretical debate, leaving scientists like Albert Einstein baffled. Today, entanglement is accepted as a fact of nature and is actively being explored as a resource for future technologies including quantum computers, quantum communication networks and high-precision quantum sensors.

Entanglement is also one of nature’s most elusive phenomena. Producing entanglement between particles requires that they start out in a highly ordered state, which is disfavored by thermodynamics, the process that governs the interactions between heat and other forms of energy. This poses a particularly formidable challenge when trying to realize entanglement at the macroscopic scale, among huge numbers of particles.

“The macroscopic world that we are used to seems very tidy, but it is completely disordered at the atomic scale. The laws of thermodynamics generally prevent us from observing quantum phenomena in macroscopic objects,” said Paul Klimov, a graduate student in the Institute for Molecular Engineering and lead author of new research on quantum entanglement. The institute is a partnership between the University of Chicago and Argonne National Laboratory.

Previously, scientists have overcome the thermodynamic barrier and achieved macroscopic entanglement in solids and liquids by going to ultra-low temperatures (-270 degrees Celsius) and applying huge magnetic fields (1,000 times larger than that of a typical refrigerator magnet) or using chemical reactions. In the Nov. 20 issue of Science Advances, Klimov and other researchers in Prof. David Awschalom’s group at the Institute for Molecular Engineering have demonstrated that macroscopic entanglement can be generated at room temperature and in a small magnetic field.

The researchers used infrared laser light to order (preferentially align) the magnetic states of thousands of electrons and nuclei and then electromagnetic pulses, similar to those used for conventional magnetic resonance imaging (MRI), to entangle them. This procedure caused pairs of electrons and nuclei in a macroscopic 40 micrometer-cubed volume (the volume of a red blood cell) of the semiconductor SiC to become entangled.

“We know that the spin states of atomic nuclei associated with semiconductor defects have excellent quantum properties at room temperature,” said Awschalom, the Liew Family Professor in Molecular Engineering and a senior scientist at Argonne. “They are coherent, long-lived and controllable with photonics and electronics. Given these quantum ‘pieces,’ creating entangled quantum states seemed like an attainable goal.”

In addition to being of fundamental physical interest, “the ability to produce robust entangled states in an electronic-grade semiconductor at ambient conditions has important implications on future quantum devices,” Awschalom said.

In the short term, the techniques used here in combination with sophisticated devices enabled by advanced SiC device-fabrication protocols could enable quantum sensors that use entanglement as a resource for beating the sensitivity limit of traditional (non-quantum) sensors. Given that the entanglement works at ambient conditions and that SiC is bio-friendly, biological sensing inside a living organism is one particularly exciting application.

“We are excited about entanglement-enhanced magnetic resonance imaging probes, which could have important biomedical applications,” said Abram Falk of IBM’s Thomas J. Watson Research Center and a co-author of the research findings.

In the long term, it might even be possible to go from entangled states on the same SiC chip to entangled states across distant SiC chips. Such efforts could be facilitated by physical phenomena that allow macroscopic quantum states, as opposed to single quantum states (in single atoms), to interact very strongly with one another, which is important for producing entanglement with a high success rate. Such long-distance entangled states have been proposed for synchronizing global positioning satellites and for communicating information in a manner that is fundamentally secured from eavesdroppers by the laws of physics.