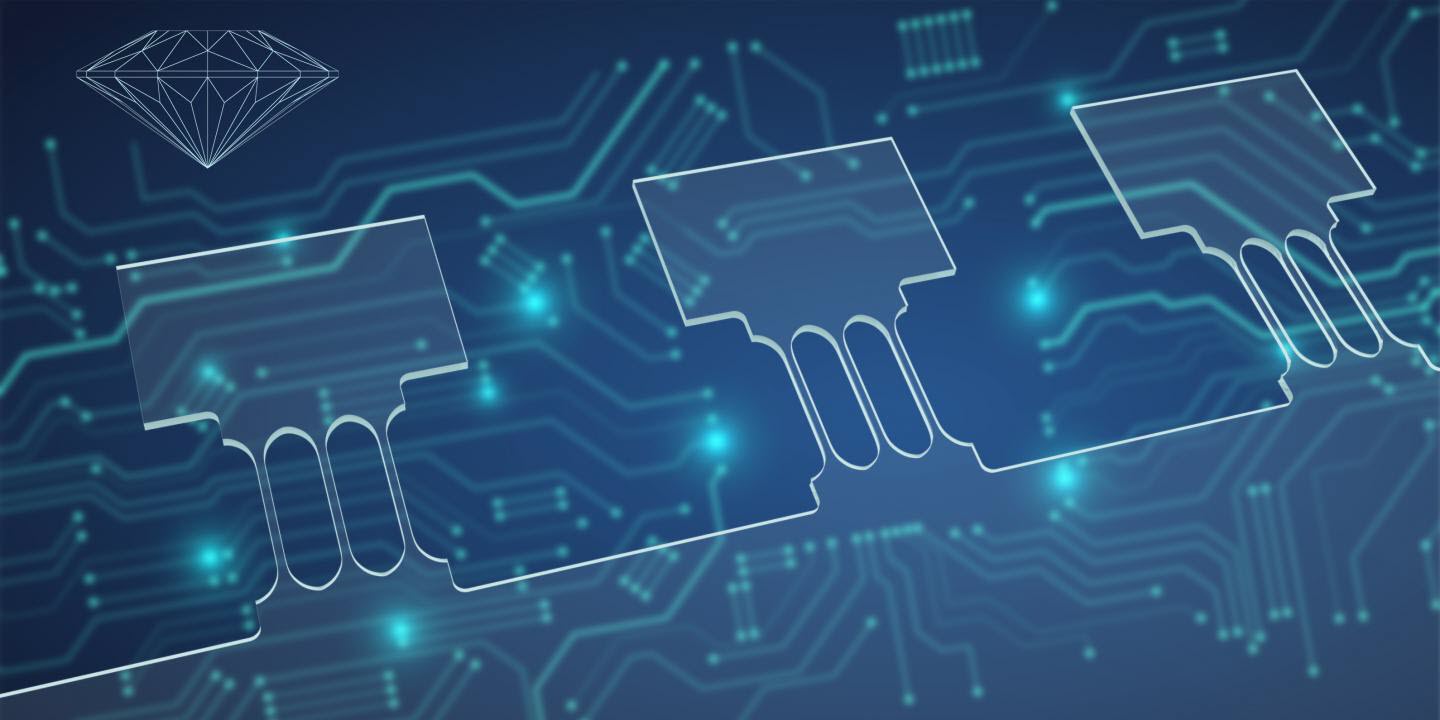 Diamond is the hardest material in nature. But out of many expectations, it also has great potential as an excellent electronic material. A joint research team led by City University of Hong Kong (CityU) has demonstrated for the first time the large, uniform tensile elastic straining of microfabricated diamond arrays through the nanomechanical approach. Their findings have shown the potential of strained diamonds as prime candidates for advanced functional devices in microelectronics, photonics, and quantum information technologies.

The research was co-led by Dr. Lu Yang, associate professor in the Department of Mechanical Engineering (MNE) at CityU, and researchers from Massachusetts Institute of Technology (MIT) and Harbin Institute of Technology (HIT). Their findings have been recently published in the prestigious scientific journal Science, titled "Achieving large uniform tensile elasticity in microfabricated diamond."

"This is the first time showing the extremely large, uniform elasticity of diamond by tensile experiments. Our findings demonstrate the possibility of developing electronic devices through 'deep elastic strain engineering' of microfabricated diamond structures," said Lu.

Well known for its hardness, industrial applications of diamonds are usually cutting, drilling, or grinding. But diamond is also considered as a high-performance electronic and photonic material due to its ultra-high thermal conductivity, exceptional electric charge carrier mobility, high breakdown strength and ultra-wide bandgap. Bandgap is a key property in semi-conductor, and wide bandgap allows operation of high-power or high-frequency devices. "That's why diamond can be considered as [the] 'Mount Everest' of electronic materials, possessing all these excellent properties," Lu said.

However, the large bandgap and tight crystal structure of diamond make it difficult to "dope," a common way to modulate the semi-conductors' electronic properties during production, hence hampering the diamond's industrial application in electronic and optoelectronic devices. A potential alternative is by "strain engineering," that is to apply very large lattice strain, to change the electronic band structure and associated functional properties. But it was considered as "impossible" for diamond due to its extremely high hardness.

Then in 2018, Lu and his collaborators discovered that, surprisingly, nanoscale diamond can be elastically bent with unexpected large local strain. This discovery suggests the change of physical properties in diamond through elastic strain engineering can be possible. Based on this, the latest study showed how this phenomenon can be utilized for developing functional diamond devices.

Uniform tensile straining across the sample 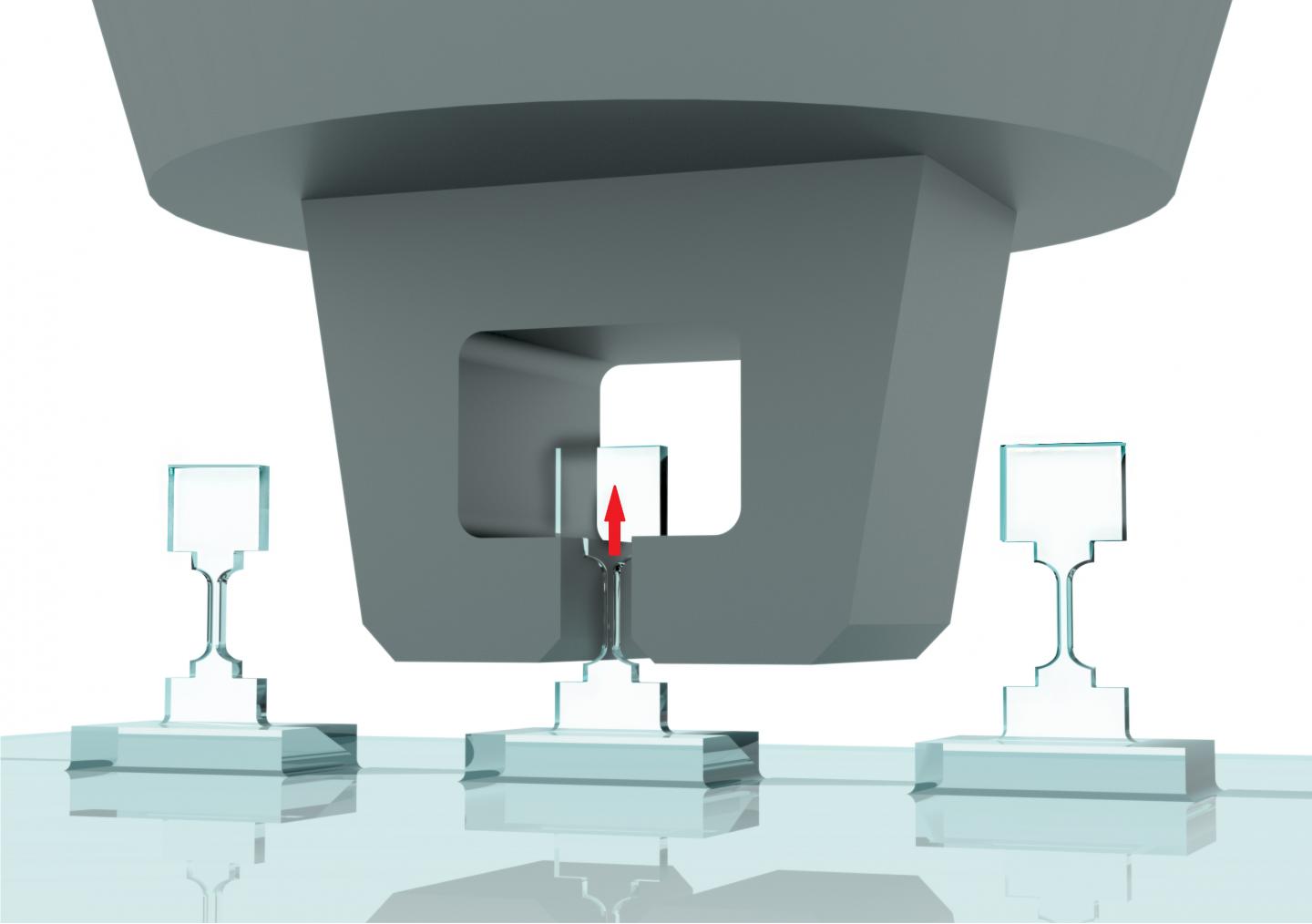 The team firstly microfabricated single-crystalline diamond samples from a solid diamond single crystals. The samples were in bridge-like shape—about one micrometer long and 300 nanometers wide, with both ends wider for gripping (See image: Tensile straining of diamond bridges). The diamond bridges were then uniaxially stretched in a well-controlled manner within an electron microscope. Under cycles of continuous and controllable loading-unloading of quantitative tensile tests, the diamond bridges demonstrated a highly uniform, large elastic deformation of about 7.5 percent strain across the whole gauge section of the specimen, rather than deforming at a localized area in bending. And they recovered their original shape after unloading.

By further optimizing the sample geometry using the American Society for Testing and Materials standard, they achieved a maximum uniform tensile strain of up to 9.7 percent, which even surpassed the maximum local value in the 2018 study, and was close to the theoretical elastic limit of diamond. More importantly, to demonstrate the strained diamond device concept, the team also realized elastic straining of microfabricated diamond arrays.

Tuning the bandgap by elastic strains

The team then performed density functional theory (DFT) calculations to estimate the impact of elastic straining from 0 to 12% on the diamond's electronic properties. The simulation results indicated that the bandgap of diamond generally decreased as the tensile strain increased, with the largest bandgap reduction rate down from about 5 eV to 3 eV at around 9 percent strain along a specific crystalline orientation. The team performed an electron energy-loss spectroscopy analysis on a pre-strained diamond sample and verified this bandgap decreasing trend.

Their calculation results also showed that, interestingly, the bandgap could change from indirect to direct with the tensile strains larger than 9 percent along another crystalline orientation. Direct bandgap in semi-conductor means an electron can directly emit a photon, allowing many optoelectronic applications with higher efficiency.

These findings are an early step in achieving deep elastic strain engineering of microfabricated diamonds. By nanomechanical approach, the team demonstrated that the diamond's band structure can be changed, and more importantly, these changes can be continuous and reversible, allowing different applications, from micro/nanoelectromechanical systems (MEMS/NEMS), strain-engineered transistors, to novel optoelectronic and quantum technologies. "I believe a new era for diamond is ahead of us," said Lu.

- This press release was originally published on the CityU website. It has been edited for style