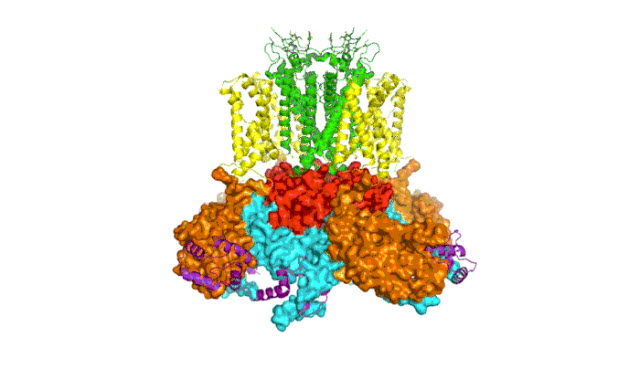 Researchers found telling structural details in the section of the Eag1 channel that spans the cellular membrane.Image Courtesy of: Laboratory of Molecular Neurobiology at The Rockefeller University/Science

Most cells in the body carry on their surface tiny pores through which potassium ions travel. In controlling the flow of these positively charged ions, the channel helps the cell maintain its electrical balance.

One particular type of potassium channel, called Eag1, has been found in a number of cell types: in the neurons of the brain, in embryonic cells that generate muscle fiber, and in some tumors cells, where it's thought to have a cancer-promoting effect. But it's not yet clear how Eag1 differs from other potassium channels, or exactly how it works. 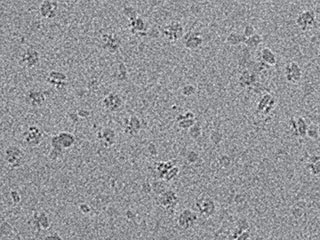 Samples of the channel were frozen, then bombarded with electrons to produce the raw images shown above. This work was done in Rockefeller’s new cryo-electron microscopy facility.Image Courtesy of: Laboratory of Molecular Neurobiology at The Rockefeller University/ScienceA duo of researchers at The Rockefeller University has taken an early step toward an answer. Using Rockefeller's new facility for cryo-electron microscopy, an advanced imaging technique in which samples are frozen then bombarded with electrons, they determined the structure of Eag1. Their results, the first structure to be published from Rockefeller's facility, appear August 11 in Science.

Like some other potassium channels, Eag1 opens when it senses a change in electrical potential, as happens when neurons send signals. In the video above, the part of the channel that most interested the researchers--the section that spans the cell membrane--appears in yellow and green.

It includes the sensors responsible for detecting electrical changes (yellow), and the segments that form the pore through which potassium passes (green). The rest of the channel is located inside the cell. The researchers also determined the structure of another molecule called calmodulin (purple), which binds to Eag1 and holds it in a closed position.

"Within the structure, we see some important differences between Eag1 and other potassium channels in the section that spans the cellular membrane," says first author Jonathan Whicher, a postdoc in Roderick MacKinnon's lab. "This gives us a better idea of how the channel's components work on a molecular level, and its role within a cell, either a normal one or a cancerous one."

This research is an early step toward finding molecules that could inhibit or control the channel. These, in turn, could provide valuable tools for further exploring the role of Eag1 in cancer, or for developing new therapeutics.

The study also begins to fill an important gap in understanding the inner workings of potassium channels, which are the primary focus of MacKinnon's Laboratory of Molecular Neurobiology. In 2003, MacKinnon, who is also the John D. Rockefeller Jr. Professor and a Howard Hughes Medical Institute investigator, won the Nobel Prize for capturing the three-dimensional structure of a potassium channel for the first time.

About The Rockefeller University

The Rockefeller University is the world's leading biomedical research university and is dedicated to conducting innovative, high-quality research to improve the understanding of life for the benefit of humanity. Our 79 laboratories conduct research in neuroscience, immunology, biochemistry, genomics, and many other areas, and a community of 1,800 faculty, students, postdocs, technicians, clinicians, and administrative personnel work on our 14-acre Manhattan campus. Our unique approach to science has led to some of the world's most revolutionary and transformative contributions to biology and medicine. During Rockefeller's 115-year history, 24 of our scientists have won Nobel Prizes, 21 have won Albert Lasker Medical Research Awards, and 20 have garnered the National Medal of Science, the highest science award given by the United States.