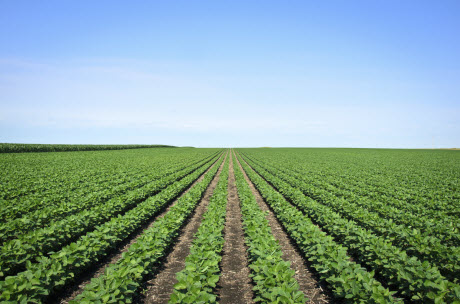 "This is the first study to carefully examine the carbon on farmland when biofuels are grown, instead of just making assumptions about it," researcher says.Photo courtesy of the University of MichiganANN ARBOR—A new study from University of Michigan researchers challenges the widely held assumption that biofuels such as ethanol and biodiesel are inherently carbon neutral.

Contrary to popular belief, the heat-trapping carbon dioxide gas emitted when biofuels are burned is not fully balanced by the CO2 uptake that occurs as the plants grow, according to a study by research professor John DeCicco and co-authors at the U-M Energy Institute.

The study, based on U.S. Department of Agriculture crop-production data, shows that during the period when U.S. biofuel production rapidly ramped up, the increased carbon dioxide uptake by the crops was only enough to offset 37 percent of the CO2 emissions due to biofuel combustion.

The researchers conclude that rising biofuel use has been associated with a net increase—rather than a net decrease, as many have claimed—in the carbon dioxide emissions that cause global warming. The findings were published online Aug. 25 in the journal Climatic Change.

"This is the first study to carefully examine the carbon on farmland when biofuels are grown, instead of just making assumptions about it," DeCicco said. "When you look at what's actually happening on the land, you find that not enough carbon is being removed from the atmosphere to balance what's coming out of the tailpipe."

The use of biofuels to displace petroleum has expanded over the last decade in response to policies, such as the U.S. Renewable Fuel Standard, that promote their use for transportation. Consumption of liquid biofuels—mainly corn ethanol and biodiesel—has grown in the United States from 4.2 billion gallons in 2005 to 14.6 billion gallons in 2013.

The environmental justification rests on the assumption that biofuels, as renewable alternatives to fossil fuels, are inherently carbon neutral because the carbon dioxide released when they are burned was derived from CO2 that the growing corn or soybean plants pulled from the atmosphere through photosynthesis.

That assumption is embedded in the carbon footprint models used to justify and administer policies such as the federal RFS and the California Low-Carbon Fuel Standard. The models, which are based on a technique called lifecycle analysis, have often found that crop-based biofuels offer at least modest net greenhouse gas reductions relative to petroleum fuels.

Instead of modeling the emissions, DeCicco and his colleagues analyzed real-world data on crop production, biofuel production, fossil fuel production, and vehicle emissions—without presuming that that biofuels are carbon neutral. Their empirical work reached a striking conclusion.

"When it comes to the emissions that cause global warming, it turns out that biofuels are worse than gasoline," DeCicco said. "So the underpinnings of policies used to promote biofuels for reasons of climate have now been proven to be scientifically incorrect.

"Policymakers should reconsider their support for biofuels. This issue has been debated for many years. What's new here is that hard data, straight from America's croplands, now confirm the worst fears about the harm that biofuels do to the planet."

The Climatic Change paper is titled "Carbon balance effects of U.S. biofuel production and use."

DeCicco's co-authors include current and former students at the U-M School of Natural Resources and Environment and the U-M Program in the Environment, as well as a postdoctoral researcher at the Energy Institute. They are Danielle Yuqiao Liu, Joonghyeok Heo, Rashmi Krishnan, Angelika Kurthen, and Louise Wang.

Some funding for the study was provided by the American Petroleum Institute.