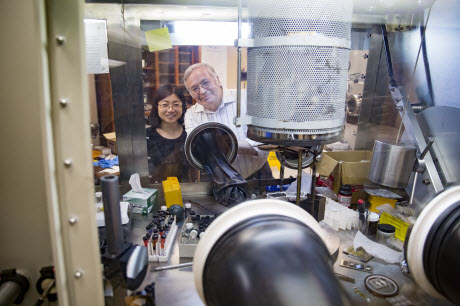 Sarah Li (left) and Z. Valy Vardeny (right) stand behind the area where they prepared the film sample of the hybrid perovskite methyl-ammonium lead iodine (CH3NH3PbI3). The researchers' new study is the first to show that the material is a promising candidate for spintronics, an alternative to conventional electronics. Spintronics uses the spin of the electron itself to carry information, rather than the electron's charge.Photo credit: University of UtahA University of Utah-led team has discovered that a class of “miracle materials” called organic-inorganic hybrid perovskites could be a game changer for future spintronic devices.

Spintronics uses the direction of the electron spin—either up or down—to carry information in ones and zeros. A spintronic device can process exponentially more data than traditional electronics that use the ebb and flow of electrical current to generate digital instructions. But physicists have struggled to make spintronic devices a reality.

The new study, published online May 29 in Nature Physics, is the first to show that organic-inorganic hybrid perovskites are a promising material class for spintronics. The researchers discovered that the perovskites possess two contradictory properties necessary to make spintronic devices work—the electrons’ spin can be easily controlled, and can also maintain the spin direction long enough to transport information, a property known as spin lifetime.

“It’s a device that people always wanted to make, but there are big challenges in finding a material that can be manipulated and, at the same time, have a long spin lifetime,” says Sarah Li, assistant professor in the Department of Physics & Astronomy at the U and lead author of the study. “But for this material, it’s the property of the material itself that satisfies both.”

Organic-inorganic hybrid perovskites is already famous in scientific circles for being amazingly efficient at converting sunlight into electricity.

“It’s unbelievable. A miracle material,” says Z. Valy Vardeny, distinguished professor in the Department of Physics & Astronomy and co-author of the study, whose lab studies perovskite solar cells. “In just a few years, solar cells based on this material are at 22 percent efficiency. And now it has this spin lifetime property. It’s fantastic.”

The material’s chemical composition is an unlikely candidate for spintronics, however. The hybrid perovskite inorganic frame is made of heavy elements. The heavier the atom, the easier it is to manipulate the electron spin. That’s good for spintronics. But other forces also influence the spin. When the atoms are heavy, you assume the spin lifetime is short, explains Li.

“Most people in the field would not think that this material has a long spin lifetime. It’s surprising to us, too,” says Li. “We haven’t found out the exact reason yet. But it’s likely some intrinsic, magical property of the material itself.”

Spintronics: That magnetic moment when… 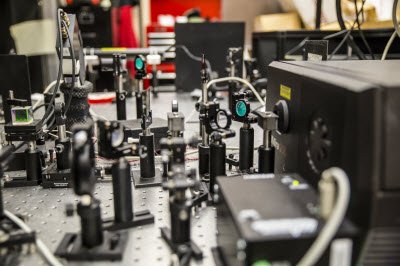 The ultrafast laser shoots very short light pulses 80 million times a second at the hybrid perovskite material to determine whether its electrons could be used to carry information in future devices. They split the laser into two beams; the first one hits the film to set the electron spin in the desired direction. The second beam bends through a series of mirrors like a pin ball machine before hitting the perovskite film at increasing time intervals to measure how long the electron held the spin in the prepared direction.Photo credit: University of Utah“The silicon technology, based only on the electron charge, is reaching its size-limit,” says Li, “The size of the wire is already small. If gets any smaller, it’s not going to work in a classical way that you think of.”

“People were thinking, ‘How do we increase the amount of information in such a small area?’” adds Vardeny. “What do we do to overcome this limit?”

Spintronics uses the spin of the electron itself to carry information. Electrons are basically tiny magnets orbiting the nucleus of an element. Just like the Earth has its own orientation relative to the sun, electrons have their own spin orientation relative to the nucleus that can be aligned in two directions: “Up,” which represents a one, and “down,” which represents a zero. Physicists relate the electron’s “magnetic moment” to its spin.

By adding spin to traditional electronics, you can process exponentially more information than using them classically based on less or more charge.

The experiment to tune electron spin

Tuning an electron spin is like tuning a guitar, but with a laser and a lot of mirrors. 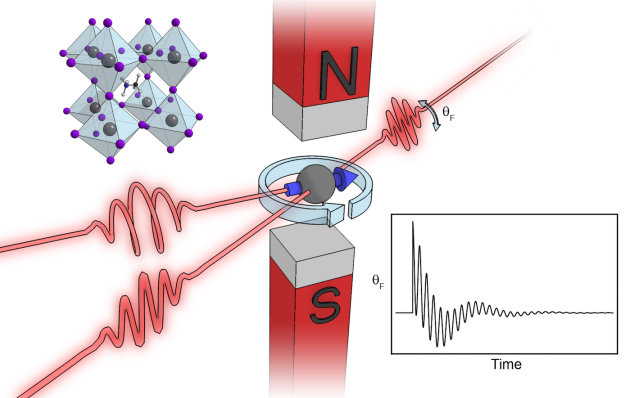 Schematic of the ultrafast optics experiment. An initial laser pulse aligns an electron spin along the beam path; the electron spin precesses in an external magnetic field; another time delayed laser pulse detects the spin precession by rotation of its polarization plane (North or Up, South or Down). Upper left: the material structure of the hybrid perovskites. Lower right: typical data shows oscillations induced by spin precession.Illustration credit: Patrick Odenthal

First, the researchers formed a thin film from the hybrid perovskite methyl-ammonium lead iodine (CH3NH3PbI3) and placed it in front of an ultrafast laser that shoots very short light pulses 80 million times a second. The researchers are the first to use light to set the electron’s spin orientation and observe the spin precession in this material.

They split the laser into two beams; the first one hit the film to set the electron spin in the desired direction. The second beam bends through a series of mirrors like a pinball machine before hitting the perovskite film at increasing time intervals to measure how long the electron held the spin in the prepared direction.

They found that the perovskite has a surprisingly long spin lifetime—up to nanosecond. The spin flips many times during one nanosecond, which means a lot information can be easily stored and manipulated during that time.

Once they determined the long spin lifetime, the researchers tested how well they could manipulate the spin with a magnetic field.

“The spin is like the compass. The compass spins in this magnetic field perpendicular to that compass, and eventually it will stop spinning,” says Li. “Say you set the spin to ‘up,’ and you call that ‘one.’ When you expose it to the magnetic field, the spin changes direction. If it rotated 180 degrees, it changes from one to zero. If it rotated 360 degrees, it goes from one to one.”

They found that they could rotate the spin more than 10 turns by exposing the electron to different strengths of magnetic field.

The potential for this material is enormous, says Vardeny. It could process data faster and increase random-access memory.

Li and Vardeny conducted the research with first authors Patrick Odenthal and William Talmadge, Nathan Gundlach, Chuang Zhang and Dali Sun from the Department of Physics & Astronomy at the University of Utah; Zhi-Gang Yu of the ISP/ Applied Sciences Laboratory at Washington State University; and Ruizhi Wang, who is now at the School of Electronic and Optical Engineering at Nanjing University of Science and Technology.