Aug 19, 2020University of Illinois at Urbana-Champaign 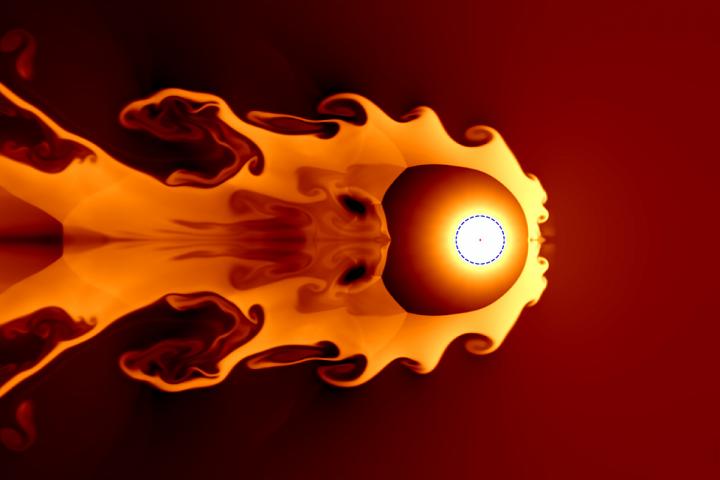 A team of researchers led by professor Brian Fields hypothesizes that a supernova about 65 light-years away may have contributed to the ozone depletion and subsequent mass extinction of the late Devonian Period, 359 million years ago. Pictured is a simulation of a nearby supernova colliding with and compressing the solar wind. Earth's orbit, the blue dashed circle, and the Sun, red dot, are shown for scale.
Graphic courtesy of Jesse Miller

CHAMPAIGN, IL — Imagine reading by the light of an exploded star, brighter than a full moon—it might be fun to think about, but this scene is the prelude to a disaster when the radiation devastates life as we know it. Killer cosmic rays from nearby supernovae could be the culprit behind at least one mass extinction event, researchers said, and finding certain radioactive isotopes in Earth's rock record could confirm this scenario.

A new study led by University of Illinois, Urbana-Champaign astronomy and physics professor Brian Fields explores the possibility that astronomical events were responsible for an extinction event 359 million years ago, at the boundary between the Devonian and Carboniferous periods.

The paper is published in the Proceedings of the National Academy of Sciences.

The team concentrated on the Devonian-Carboniferous boundary because those rocks contain hundreds of thousands of generations of plant spores that appear to be sunburnt by ultraviolet light—evidence of a long-lasting ozone-depletion event.

"Earth-based catastrophes such as large-scale volcanism and global warming can destroy the ozone layer, too, but evidence for those is inconclusive for the time interval in question," Fields said. "Instead, we propose that one or more supernova explosions, about 65 light-years away from Earth, could have been responsible for the protracted loss of ozone."

"To put this into perspective, one of the closest supernova threats today is from the star Betelgeuse, which is over 600 light-years away and well outside of the kill distance of 25 light-years," said graduate student and study co-author Adrienne Ertel.

The team explored other astrophysical causes for ozone depletion, such as meteorite impacts, solar eruptions and gamma-ray bursts. "But these events end quickly and are unlikely to cause the long-lasting ozone depletion that happened at the end of the Devonian period," said graduate student and study co-author Jesse Miller.

A supernova, on the other hand, delivers a one-two punch, the researchers said. The explosion immediately bathes Earth with damaging UV, X-rays, and gamma rays. Later, the blast of supernova debris slams into the solar system, subjecting the planet to long-lived irradiation from cosmic rays accelerated by the supernova. The damage to Earth and its ozone layer can last for up to 100,000 years. 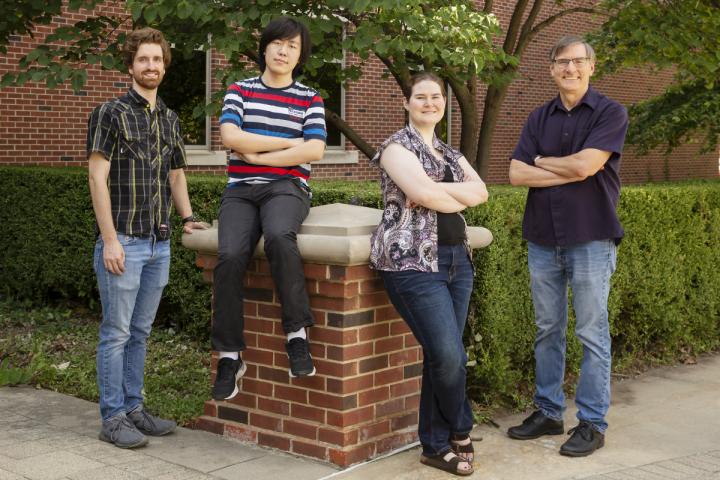 However, fossil evidence indicates a 300,000-year decline in biodiversity leading up to the Devonian-Carboniferous mass extinction, suggesting the possibility of multiple catastrophes, maybe even multiple supernovae explosions. "This is entirely possible," Miller said. "Massive stars usually occur in clusters with other massive stars, and other supernovae are likely to occur soon after the first explosion."

The team said the key to proving that a supernova occurred would be to find the radioactive isotopes plutonium-244 and samarium-146 in the rocks and fossils deposited at the time of extinction. "Neither of these isotopes occurs naturally on Earth today, and the only way they can get here is via cosmic explosions," said undergraduate student and co-author Zhenghai Liu.

Researchers have yet to search for Pu-244 or Sm-146 in rocks from the Devonian-Carboniferous boundary. Fields' team said its study aims to define the patterns of evidence in the geological record that would point to supernova explosions.

"The overarching message of our study is that life on Earth does not exist in isolation," Fields said. "We are citizens of a larger cosmos, and the cosmos intervenes in our lives—often imperceptibly, but sometimes ferociously."

- This press release was originally published on the Illinois News Bureau