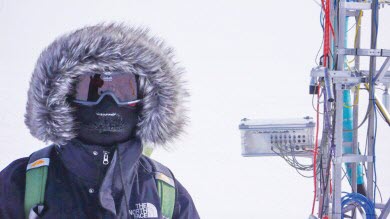 Photo courtesy of the University of Illinois at ChicagoScientists studying data from the top of the Greenland ice sheet have discovered that during winter in the center of the world’s largest island, temperature inversions and other low-level atmospheric phenomena effectively isolate the ice surface from the atmosphere—recycling water vapor and halting the loss or gain of ice.

A team of climate scientists made the surprising discovery from three years of data collected at Summit Camp, an arid, glaciated landscape 10,500 feet above sea level in the middle of the Greenland ice sheet.

“This is a place, unlike the rest of the ice sheet, where ice is accumulating,” says Max Berkelhammer, assistant professor of earth and environmental sciences at the University of Illinois at Chicago. Berkelhammer is first author on the study, reported in Science Advances, an open-access online publication of the journal Science.

"But in the center of the ice sheet, it’s 25 below zero Celsius (-13 F), so it’s always freezing, even if it warms. It’s a very rare occurrence to go above freezing,” he said. The authors note that “despite rapid melting in the coastal regions of the ice sheet, a significant area—approximately 40 percent—rarely experiences surface melting.”

Solid ice can be lost not only by melting into liquid water. Under certain conditions, it can vaporize by sublimation, a one-step transition from solid to gas. Such conditions exist at the high-altitude, dry, frigid surface of Greenland’s interior. 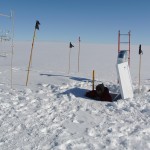 Research tower and sub-surface laboratory at Summit Camp on the Greenland Ice Sheet.Photo credit: Max Berkelhammer“Sublimation is common there, unlike other places,” Berkelhammer said. “We looked at the exchange of water between the ice sheet and the air above it through condensation, evaporation, and sublimation.”

At Summit Camp, a 150-foot tower was used to draw air samples at various heights above the surface and pipe the air into a laboratory buried a few feet below the ice. Lasers analyzed the air for two different isotopes of oxygen in H2O, whose ratio indicates the temperature at which the water molecules became airborne.

“We noticed a specific process that was occurring, where low-level fog would form right above the surface of the ice sheet,” Berkelhammer said. A fogbow—a rainbow caused by fog—often appeared.

“As ice sublimates from the surface, it forms a fog,” he said. “As the particles get heavier and settle back to the surface, you get recycling, rather than dissipation that would remove ice.”

In winter, 80 percent of the ice that would otherwise be lost is recycled, Berkelhammer said. “So it’s an incredibly efficient process.”

But many questions remain as to how this boundary-layer recycling contributes to models of climate change.

“We expected sublimation to increase with temperature, but we find no net loss” of ice over time, Berkelhammer said, again referring just to the interior of the ice mass. “You could say, if this process changes, you’d lose ice significantly faster. Or, if (recycling) becomes even more efficient, you would conserve even more ice mass.

“We can’t predict,” he said. “And we don’t know from the ice-core records what the history is.” 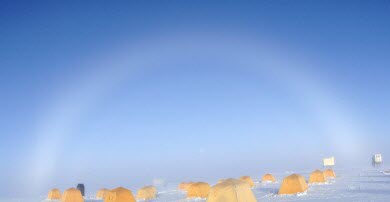 Fogbow over Summit Camp on the Greenland Ice Sheet.Photo: Max BerkelhammerThe next step, he said, is to run experiments to see how sublimation changes with temperature associated with past and future changes in atmospheric carbon dioxide levels, to see how recycling fits into climate models.

“If we want to model how the ice sheet is warming, we need to include everything we know,” he said. “This is a new process to incorporate in models.”

But Berkelhammer cautions against over-interpreting the recycling as good news for the ice sheet or the planet, as its overall effect is likely to be relatively minor.

“This is small potatoes compared to the calving that’s going on along the coasts,” he said. “Every time we go back to Greenland, the edge of the ice is farther away from the coast.”

Funding for the research was provided by the National Science Foundation, the Cooperative Institute for Research in Environmental Sciences (CIRES), the National Oceanic and Atmospheric Administration (NOAA) Climate Program, and the Danish Council for Independent Research.