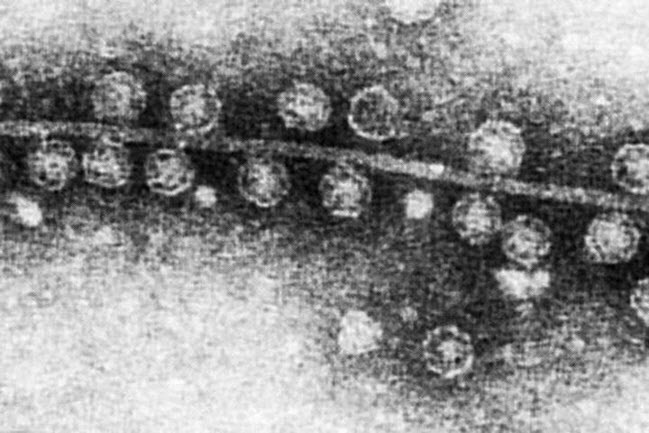 Shown is a micrograph image of RNA bacteriophages attached to part of the bacterium E. coli. A new study at Washington University School of Medicine in St. Louis suggests that bacteriophages made of RNA—a close chemical cousin of DNA—likely play a much larger role in shaping the bacterial makeup of worldwide habitats than previously recognized.Image Courtesy of: Graham Beards/Wikimedia

Viruses that infect bacteria are among the most abundant life forms on Earth. Indeed, our oceans, soils and potentially even our bodies would be overrun with bacteria were it not for bacteria-eating viruses, called bacteriophages, that keep the microbial balance of ecological niches in check.

Now, a new study at Washington University School of Medicine in St. Louis suggests that bacteriophages made of RNA—a close chemical cousin of DNA—likely play a much larger role in shaping the bacterial makeup of worldwide habitats than previously recognized.

The research, published March 24 in PLOS Biology, has identified 122 new types of RNA bacteriophages in diverse ecological niches, providing an opportunity for scientists to define their contributions to ecology and potentially to exploit them as novel tools to fight bacterial infections, particularly those that are resistant to antibiotics.

"Lots of DNA bacteriophages have been identified, but there's an incredible lack of understanding about RNA bacteriophages," explained senior author David Wang, PhD, associate professor of molecular microbiology. "They have been largely ignored—relatively few were known to exist, and for the most part, scientists haven't bothered to look for them. This study puts RNA bacteriophages on the map and opens many new avenues of exploration."

Wang estimates that of the more than 1,500 bacteriophages that have been identified, 99 percent of them have DNA genomes. The advent of large-scale genome sequencing has helped scientists identify DNA bacteriophages in the human gut, skin and blood as well as in the environment, but few researchers have looked for RNA bacteriophages in those samples (doing so requires that RNA be isolated from the samples and then converted back to DNA before sequencing).

As part of the new study, first author and graduate student Siddharth Krishnamurthy, and the team, including Dan Barouch, MD, PhD, of Beth Israel Deaconess Medical Center and Harvard Medical School, identified RNA bacteriophages by analyzing data from samples taken from the environment, such as oceans, sewage and soils, and from aquatic invertebrates including crabs, sponges and barnacles, as well as insects, mice and rhesus macaques.

RNA bacteriophages have been shown to infect gram-negative bacteria, which have become increasingly resistant to antibiotics and are the source of many infections in health-care settings. But the researchers also showed for the first time that these bacteriophages also may infect gram-positive bacteria, which are responsible for strep and staph infections as well as MRSA (methicillin-resistant Staphylococcus aureus).

"What we know about RNA bacteriophages in any environment is limited," Wang said. "But you can think of bacteriophages and bacteria as having a predator-prey relationship. We need to understand the dynamics of that relationship. Eventually, we'd like to manipulate that dynamic to use phages to selectively kill particular bacteria.