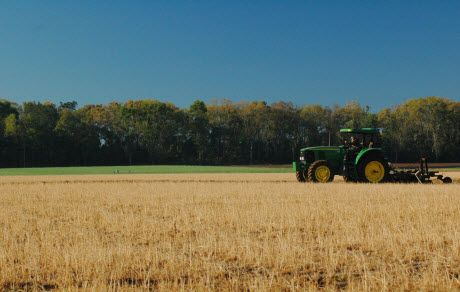 Global food demand is expected to increase 60 percent—with 9 billion people by the middle of the 21st century, according to a 2012 study by the Food and Agriculture Organization of the United Nations.Photo courtesy of the University of Florida Institute of Food and Agricultural SciencesA global team of scientists, led by those at UF/IFAS, used two different simulation methods and one statistical method to predict the impact of rising temperatures on global wheat production, and all came to similar estimates.

This finding, published in a study in the journal Nature Climate Change, is critical in predicting how much wheat and other crops we’ll need to feed the world, said Senthold Asseng, a UF/IFAS professor of agricultural and biological engineering and leader of this study.

Predicting crop yields is important because rising temperatures tend to keep fruits, vegetables, and other crops from growing as well as they should, Asseng said.

“This means we’re closer to more precisely predicting crop yields and their response to climate change worldwide, but we have shown this only for wheat, so far,” Asseng said. “It’s the first time that a scientific study compared different methods of estimating temperature impacts on global crop production. Since the different methods point to very similar impacts, it improves our confidence in estimating temperature impact on global crop production.”

Global food demand is expected to increase 60 percent—with 9 billion people by the middle of the 21st century, according to a 2012 study by the Food and Agriculture Organization of the United Nations. One critical crop that helps feed the world is wheat. Globally, China produces the most wheat at about 265 billion pounds per year, while the United States produces about 132 billion pounds, according to the same UN organization.

Bing Liu, a student from Nanjing Agricultural University in China who’s doing research in Asseng’s lab, is the lead author for the study, which includes nearly 50 scientists worldwide. This study is a part of AgMIP—the Agricultural Model Intercomparison and Improvement Project, which brings together agricultural scientists from around the world to research climate change impacts and adaptation options. Many of the same scientists who helped with this study have worked with Asseng on computer models to simulate crop growth and yield, particularly for wheat.