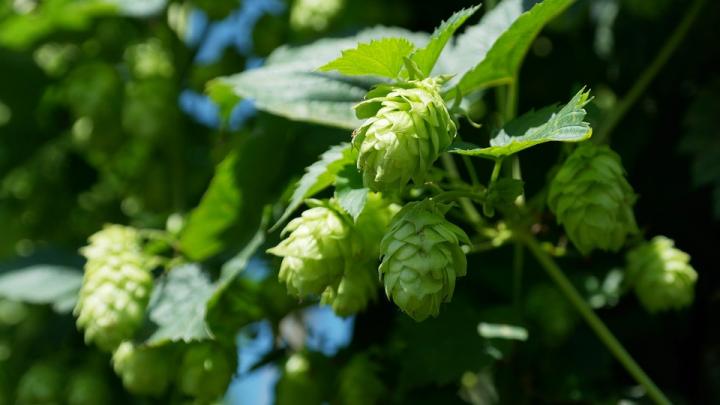 Dietary supplements made from hops are used to combat the night sweats and hot flashes commonly reported during menopause.
Photo courtesy of Oregon State University

CORVALLIS, OR — Hop-based dietary supplements that many women use to ease the night sweats and hot flashes commonly reported during menopause aren't likely to cause drug interactions, new research from Oregon State University's Linus Pauling Institute and College of Pharmacy shows.

Hops are the flowers of the hop plant and are what give beer its bitter flavor. Supplements made from hops can be effective for alleviating menopausal symptoms because hops contain phytoestrogens. Phytoestrogens are plant-based compounds that mimic the action of female sex hormones, whose deficiency is at the root of symptoms often felt by women in menopause, which also include sleep disturbances, fatigue, and vaginal dryness.

"There are reports from other lab studies that compounds from hops may inhibit or deactivate certain drug-metabolizing enzymes," said the study's lead investigator and corresponding author, Richard van Breemen, director and principal investigator of the Linus Pauling Institute. "There is additional concern because we know the compounds in hops have a long half-life in humans, possibly more than 20 hours after taking them."

The long half-life means hops supplements may still be found in the bloodstream when women take drugs they are prescribed. Because these botanical supplements are made from plants, many people don't think of the possibility of drug interactions when they take them.

To determine hops' effect on drug-metabolizing enzymes, the scientists gave 16 research subjects a cocktail of four drugs, each one primarily metabolized by a different enzyme in a family of enzymes known as cytochrome P450s. The drugs were caffeine; alprazolam, an anti-anxiety medicine sold under the trade name Xanax; dextromethorphan, an over-the-counter cough suppressant; and tolbutamide, a medicine used to treat type 2 diabetes.

"We did each drug trial twice. Once to see how these women metabolized the drugs normally," van Breemen explained. "Then we repeated the trial with hops after the participants took a hops extract twice daily for two weeks. Thankfully, no enzyme inhibition was detected."

Guidelines for clinical studies of drug interactions involving CYP enzymes have been set by the US Food and Drug Administration, he noted.

"Under FDA guidelines, the hop dietary supplement caused no clinically relevant pharmacokinetic interactions" said co-author Luying Chen, a PhD student in van Breemen's lab. "So we can say that hop dietary supplements are not expected to produce any harmful drug interactions, at least with respect to the enzymes probed during this investigation. More research is needed, but these findings are good news for women who take hops for relief of menopause symptoms."