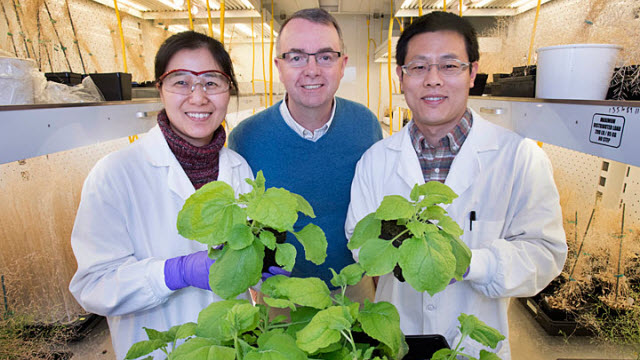 UPTON, NY—Even plants have to live on an energy budget. While they’re known for converting solar energy into chemical energy in the form of sugars, plants have sophisticated biochemical mechanisms for regulating how they spend that energy. Making oils costs a lot.

By exploring the details of this delicate energy balance, a group of scientists from the U.S. Department of Energy’s Brookhaven National Laboratory has identified a previously unknown link between a protein that maintains plant sugar balance and one that turns on oil production. The biochemical detective work, described in the journal The Plant Cell, points to new strategies for tapping into the energy plants capture from the sun to produce oil-based biofuels and other biomaterials.

“This study shows how understanding fundamental biochemistry and cell biology can potentially be useful for increasing the production of desired plant products,” said Brookhaven Lab senior biochemist John Shanklin, who led the research. “It’s an example of basic science pointing to ways to improve crop plants to produce more of what we want.”

Shanklin’s team, which includes postdoctoral fellow Zhiyang Zhai and research associate Hui Liu, explored the roles of genetic and biochemical factors that might provide a link between plants’ sugar levels and oil production.

“We know a lot about sugar homeostasis—the mechanisms that keep sugar at the right level,” Shanklin said. “One of the key players is a protein that controls sugar levels much like a thermostat controls temperatures.”

When sugar is low, this protein, known as KIN10, adds a phosphate group to as many as a thousand different proteins to change their functions in ways that ultimately increase sugar levels, Shanklin explained. As sugar levels increase KIN10’s ability to phosphorylate proteins becomes inhibited, slowing down sugar production.

In addition, when plenty of sugar is available, plants can invest in energy-intensive processes such as making oils. But when sugar levels drop, oil production slows. So Shanklin suspected a link between these two processes.

His team started by looking at the 1,000 or so proteins phosphorylated by KIN10, but didn’t find the links to oil synthesis they were looking for. So the scientists turned their focus to a master regulatory protein known to control oil synthesis.

“This protein, known as WRINKLED1, turns on the genes that make oil,” Shanklin said.

“To test for links between the two regulatory proteins, we exploited a rapid genetic analysis system to express genes (and combinations of genes) in tobacco leaves, and then used immunological methods to measure the proteins produced by those genes and quantitative analysis to measure the oil,” said Zhai, the postdoc who carried out many of the experiments.

“This was a tough detective story, solved with creativity on Zhai’s part,” said Shanklin. “He brought together a number of different biochemical and genetic techniques to solve this puzzle.” 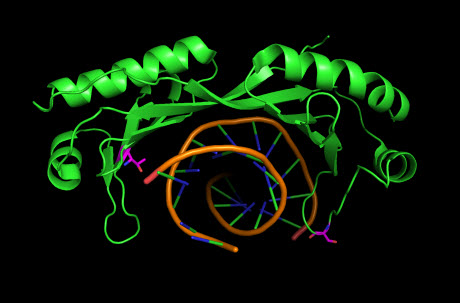 This image shows the portion of WRINKLED1 (green "ribbon") that binds to DNA (orange, green, and blue "twisted ladder") to turn on the genes for oil production in plants. The magenta, red, and blue stick-figure portions of the molecule get phosphorylated by KIN10 to mark WRINKLED1, initiating a process that leads to its destruction. Interfering with these phosphorylation sites could be one way to stabilize WRINKLED1 to increase plant oil production.Image courtesy of Brookhaven National LaboratoryWhen the scientists expressed the gene for WRINKLED1 in tobacco leaves, this oil-production “on switch” protein accumulated along with oil.  However, when they also expressed the gene for KIN10, the WRINKLED1 protein was degraded and little oil accumulated. This suggested that WRINKLED1 was somehow targeted by KIN10—a previously unknown connection.

To investigate the connection further, the team purified these proteins (KIN10 and WRINKLED1) and used a radioactive form of the element phosphorous to trace the phosphorylation reaction. When KIN10 was present, the radioactive phosphorous atoms were transferred to WRINKLED1, most likely at two sites the team hypothesized as being KIN10 target sites after analyzing the protein’s sequence.

“We confirmed the identity of the two sites by making genetic variants of WRINKLED1 that lacked them, and showed that these variants weren’t phosphorylated by KIN10,” Shanklin said. “And when we tested the expression of the modified variants in tobacco leaves, WRINKLED1 accumulated to higher levels.”

The reason, Shanklin explained, is that phosphorylation marks and prepares WRINKLED1 for destruction by the cell’s natural protein recycling machinery.

This work therefore provides a mechanistic link between sugar levels and oil production.

“When sugar is low, KIN10 phosphorylates WRINKLED1, marking it for destruction, so less WRINKLED1 is available to turn on oil production,” Shanklin said. “Conversely, when sugar levels rise—when times are good—KIN10 is turned off and WRINKLED1 levels go up and drive oil production.”

The details of the study offer several possible ways for scientists to modify WRINKLED1 to try to “trick” plants into making more oil: One is to alter the sites that get phosphorylated; the other is to interfere with sites that enable the phosphorylated protein to enter the recycling machinery.

“Nature makes genetic ‘on-switches’ short lived to enable rapid responses to changing metabolic conditions,” said Shanklin. “So we don’t need to make more of the oil-production ‘on-switch,’ we just need to prevent the protein from being degraded so it accumulates and we get stronger effects.”

This new mechanistic knowledge of WRINKLED1 degradation may help metabolic engineers achieve their goal of turning plant oils into a sustainable resource for making biofuels and other chemical products.

This research was supported by the U.S. Department of Energy’s Office of Science.