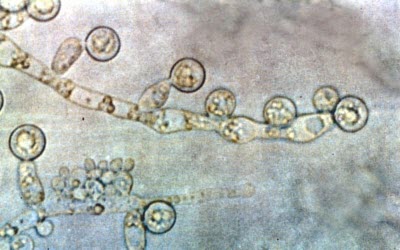 Candida albicansImage credit: GrahamColm, Wikimedia CommonsBOSTON (Nov. 18, 2015; 11:00 a.m. EST)—A new inter-disciplinary study led by researchers at Tufts University found that coconut oil effectively controlled the overgrowth of a fungal pathogen called Candida albicans (C. albicans) in mice. In humans, high levels of C. albicans in the gastrointestinal tract can lead to bloodstream infections, including invasive candidiasis. The research, published in mSphere, suggests that it might be possible to use dietary approaches as an alternative to antifungal drugs in order to decrease the risk of infections caused by C. albicans.

C. albicans, a common fungal pathogen, is part of the gastrointestinal tract’s normal flora and well-regulated by the immune system. When the immune system is compromised, however, the fungus can spread beyond the GI tract and cause disease. Systemic infections caused by C. albicans can lead to invasive candidiasis, which is the fourth most common blood infection among hospitalized patients in the United States according to the CDC. The infection is most common among immunocompromised patients, including premature infants and older adults.

The team, led by microbiologist Carol Kumamoto and nutrition scientist Alice H. Lichtenstein, investigated the effects of three different dietary fats on the amount of C. albicans in the mouse gut: coconut oil, beef tallow and soybean oil. A control group of mice were fed a standard diet for mice. Coconut oil was selected based on previous studies that found that the fat had antifungal properties in the laboratory setting.

“Coconut oil even reduced fungal colonization when mice were switched from beef tallow to coconut oil, or when mice were fed both beef tallow and coconut oil at the same time. These findings suggest that adding coconut oil to a patient’s existing diet might control the growth of C. albicans in the gut, and possibly decrease the risk of fungal infections caused by C. albicans,” said Kumamoto, PhD, a professor of molecular biology and microbiology at Tufts University School of Medicine and member of the molecular microbiology and genetics program faculties at the Sackler School of Graduate Biomedical Sciences.

“Food can be a powerful ally in reducing the risk of disease,” said Alice H Lichtenstein, D.Sc., director of the Cardiovascular Nutrition Laboratory at the Jean Mayer USDA Human Nutrition Research Center on Aging at Tufts University. “This study marks a first step in understanding how life-threatening yeast infections in susceptible individuals might be reduced through the short-term and targeted use of a specific type of fat. As exciting as these findings are, we have to keep in mind that the majority of adult Americans are at high risk for heart disease, the number one killer in the U.S. The potential use of coconut oil in the short term to control the rate of fungal overgrowth should not be considered a prophylactic approach to preventing fungal infections.”

“We want to give clinicians a treatment option that might limit the need for antifungal drugs. If we can use coconut oil as a safe, dietary alternative, we could decrease the amount of antifungal drugs used, reserving antifungal drugs for critical situations,” said first author Kearney Gunsalus, Ph.D., an Institutional Research and Academic Career Development (IRACDA) postdoctoral fellow at the Sackler School in Kumamoto’s lab.

Kumamoto, Gunsalus and Dr. Joseph Bliss at Brown/Women & Infants Hospital have proposed a clinical trial to assess the efficacy of coconut oil to reduce the amount of C. albicans in the gut of premature infants who are at high risk.

Gunsalas was supported by Institutional Research Career and Academic Development Award Number K12GM074869 from the National Institute of General Medical Sciences (NIGMS) of the National Institutes of Health (NIH). The Institutional Research Career and Academic Development Awards from the NIGMS combine traditional post-doctoral research work with mentored teaching experience at institutions that serve under-represented minorities. The Sackler School’s IRACDA Training in Education and Critical Research Skills (TEACRS) program is a partnership with the University of Massachusetts, Boston; Pine Manor College, and Bunker Hill Community College. It is the only IRACDA-funded program in New England.

Research reported in this publication was also supported by a pilot project grant to Kumamoto and Lichtenstein from Tufts Clinical and Translational Science Institute (CTSI) via the then-called National Center for Research Resources (award UL1RR025752), and an award by the National Institute of Allergy and Infectious Resources Disease to Kumamoto (award R01AI081794). Statistical support was provided by Tufts CTSI via the National Center for Advancing Translational Sciences of the NIH under award numbers UL1TR000073 and UL1TR001064.