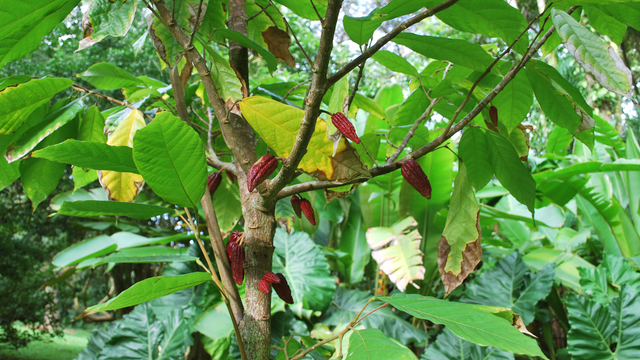 Every year, more than five million family farms in countries such as Côte d'Ivoire, Cameroon, Indonesia, and Brazil produce about four and a half million tons of cocoa beans, according the World Cocoa Foundation. Ghana and the Ivory Coast supply more than 70 percent of the world's cocoa.

Cocoa, much like coffee, is an export product consumed almost entirely in developed nations such as the United States. Yet the beans, which are used to make chocolate, are almost exclusively grown in less-developed nations such as West Africa, Asia, and Central and South America—countries that on average have extremely small demand for the product they depend on for their livelihoods.

There are a number of social, economic, and environmental inequalities that arise in the production of this luxury crop. Evidence of human trafficking and child slave labor have been found in the supply chain, according to a 2010 investigation by BBC Panorama reporter Paul Kenyon.

In addition, many of the small farmers growing cocoa in these less-developed countries live in poverty. Only about three percent of the price of each chocolate bar goes to the farmer; that is, the more chocolate people consume, the more these communities suffer.

Now, in newly published research, Mark Noble, visiting assistant professor of sociology and anthropology at Lehigh, focuses on the link between cocoa exports and deforestation in developing nations. Overall, Noble finds that the higher the concentration of cocoa exports, the more elevated the rates of deforestation across producing nations.

He notes that although chocolate production was once considered to have only minimal impacts on forests, "recent reports suggest damaging trends due to more demand and changing cultivation strategies."

"I was surprised to see how there is evidence that cocoa exports are linked to deforestation where they were not less than 20 years ago."

He concludes that the demand pressures for increased cocoa exports, changing weather patterns and falling cocoa prices, has led to more monocropping—the agricultural practice of growing only one type of agricultural product in a large area of land, year after year—and less sustainable growing practices in recent years.

Noble, author of "Chocolate and the Consumption of Forests: A Cross-National Examination of Ecologically Unequal Exchange in Cocoa Exports," recently published in the Journal of World-Systems Research, says this further impairs possibilities for successful or sustainable development in less-developed nations.

Studies have shown that when countries are encouraged to pursue economic growth through an over-reliance on export agriculture, there are negative social and environmental consequences.

He explains that both used to be exclusively grown in semi-shade conditions. "Now increased demand and more industrial growing practices are leading to pressure on forests where this was not the case in prior decades."

Consumer habits in developed countries like the United States often have negative environmental consequences that are felt in far-away places outside our view, he explains.

"Too often this environmental damage is not reflected in the price that these products are sold, and it illustrates how underdevelopment is an active process and not a chronic condition," said Noble.

The Cocoa and Forests Initiative

In March, 2017 the Prince of Wales' International Sustainability Unit, working in partnership with the World Cocoa Foundation and the Sustainable Trade Initiative, launched the Cocoa and Forests Initiative, in an effort to "end deforestation and forest degradation in the global cocoa supply chain, with an initial focus on Côte d'Ivoire and Ghana."