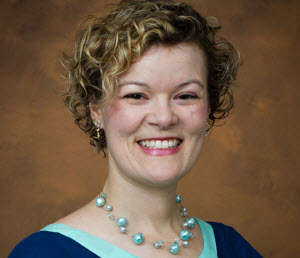 Katie Stofer led the study.Photo courtesy of the University of FloridaGAINESVILLE, Fla. — What happens when a picture is not worth 1,000 words?

That’s the question Katie Stofer, a University of Florida Institute of Food and Agricultural Sciences researcher, explored in a newly published study, as she talked to scientists and laypeople about images presented by scientists.

Artwork and graphics can help augment the written words in articles and verbal presentations, particularly if the audience is scientists. But lay people are not likely to understand those graphics, according to the study by Stofer, a UF/IFAS research assistant professor in agricultural education and communication.

Stofer conducted the study to find out the differences in what “experts” and “novices” gleaned when they viewed visuals produced by scientists. She showed graphic elements to 12 scientists and 17 lay people. Participants were shown versions of global satellite data visuals about sea surface temperatures and chlorophyll.

The upshot of the small experiment? For the most part, the experts could interpret the graphics; the novices gleaned very little information from them. While the novices did not understand the graphics very easily when they were not changed from the original ones used by scientists, they understood much more of the content after graphics were translated to use more familiar colors and labels, Stofer said.

“Just like with jargon, images can have cultural meanings that are not obvious to people outside that culture, and people creating scientific graphics need to be aware of that and do their best to translate and distill their messages,” said Stofer, who conducted the study while a doctoral student at Oregon State University. “Just because it’s a visual, people don’t automatically understand it if the graphics are ‘jargony’ themselves. Just as scientists need to use different words for audiences with different backgrounds, so, too, do scientists need to consider using different images for different audiences.”

Examples abound as to why the scientists need to explain themselves in easier-to-understand ways, Stofer said.

Scientists increasingly use data visualization to convey information, especially through rapidly spreading technologies such as Science on a Sphere™ from the National Oceanic and Atmospheric Administration, according to the study. Science on a Sphere is a room-sized global display system that uses computers and video to display planetary data on a 6-foot diameter sphere. Researchers at NOAA developed the sphere as an education tool to help illustrate earth science to people of all ages.

Additionally, teachers sometimes feel uncomfortable presenting classroom versions of spherical globes, Google Earth or even documentary films because they don’t have the time or resources to align un-translated visuals to their students’ learning levels, Stofer said.

Stofer’s new study was published in the Journal of Geoscience Education, http://bit.ly/2bS3Do3. She also wrote an Extension document that talks about how scientists can improve their graphics, http://edis.ifas.ufl.edu/wc163.