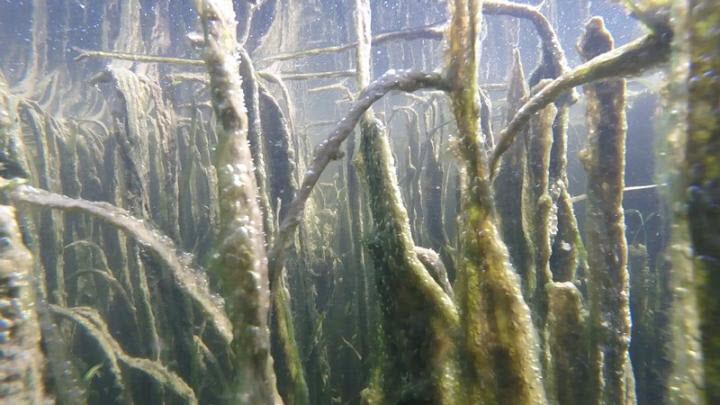 While there was a bay-wide decline of submerged aquatic vegetation (SAV) from the 1960s through the 1980s, restoring these once-abundant SAV beds has been a primary outcome of efforts to reduce loads of nutrients and sediments to the estuary and SAV cover has increased by 300 percent from 1984 to 2015. One of the largest recovered SAV beds lies in an area of the bay known as the Susquehanna Flats—a broad, tidal freshwater region located near the mouth of the Susquehanna River at the head of the bay.
Photo courtesy of Wei-Jun Cai and Jeremy Testa

For many years, the world's oceans have suffered from absorbing human-made carbon dioxide from the atmosphere, which has led to the decreasing pH of saltwater, known as ocean acidification, and threatened the health of marine organisms and ecosystems. While this process has been well documented, the acidification process is complicated and poorly understood in coastal waters.

One possible way the Chesapeake Bay is combating ocean acidification comes in the form of an already present ally: submerged aquatic vegetation (SAV). While there was a bay-wide decline of SAV from the 1960s through the 1980s, restoring these once-abundant SAV beds has been a primary outcome of efforts to reduce loads of nutrients and sediments to the estuary and SAV cover has increased by 300 percent from 1984 to 2015.

The University of Delaware's Wei-Jun Cai was part of a research group that recently conducted a study of the bay, including in the Susquehanna Flats, in order to understand how the Chesapeake Bay uses a defense mechanism against acidification—known as buffering—to help reduce carbon dioxide and acidification in its waters during the summer time.

They found that strong photosynthesis by the plants in SAV beds at the head of the bay and in other shallow, nearshore waters can remove nutrient pollution in the bay, can generate very high pH, and elevate the carbonate mineral saturation state, which facilitates the formation of calcium carbonate minerals. When these calcium carbonate particles and other biologically produced carbonate shells are transported downstream, they enter acidic subsurface waters where they dissolve.

This dissolution of the carbonate minerals helps to "buffer" the water against pH decreases or even support pH increases. "Just like people take Tums to neutralize the acids that cause heartburn, the idea is that SAV beds send carbonate minerals to the lower Bay to neutralize acids there," said Jeremy Testa of the University of Maryland Center for Environmental Sciences and a co-author of the study.

The research was recently published in Nature Geoscience. The first author, Jianzhong Su, was a UD-Xiamen University dual degree doctoral student and had Cai as an adviser.

In previous work, Cai, the Mary A.S. Lighthipe Professor in the School of Marine Science and Policy in UD's College of Earth, Ocean and Environment, showed there was a lot of calcium carbonate dissolution in the subsurface water of the lower bay but they didn't know where that carbonate was coming from.

In these areas during summer time, sunlight combines with nutrients to allow dense SAV beds to initiate high rates of photosynthesis that causes the pH in the water to increase, meaning the water is less acidic.

Because the pH is so high, the researchers were able to collect and measure the carbonate particles on the surface of the leaves, which they could scrape and analyze. Co-authors Chaoying Ni, professor in UD's Department of Materials Science and Engineering and Director of the W.M. Keck Center for Advanced Microscopy and Microanalysis, and Yichen Yao, who was a master's level student in materials engineering, did the mineral analysis.

"The lab did an image for us and showed the carbonate in these sediments and the sediment on the leaves, the particles, their concentration was a lot higher than the bottom sediment," said Cai.

"We know there is a lot of carbonate dissolution in the lower bay, and we know the upper bay is where the carbonate is formed. So in the paper, we hypothesize that it's that formation in the SAV bed that gets transported downstream and dissolves and we reproduce this downstream transport with a numerical model," said Cai. "This carbonate that is transported from upstream actually acted as a way to resist, to buffer the pH of the system."

There are important ecological ramifications of this finding in that coastal nutrient management and reduction not only help to fight against low oxygen stress but also acidification stress to the environments and organisms that live there via the resurgence of submerged vegetation.

Cai said that while their preliminary results are encouraging, the next steps are to determine if the carbonate particles are really transported by the currents and tides to the lower bay and if so, how fast and under what conditions this happens. He wants to go back to the Bay to nail down the missing link between where the carbonate forms and where it dissolves.