A typical nuclear reactor uses only a small fraction of its fuel rod to produce power before the energy-generating reaction naturally terminates. What is left behind is an assortment of radioactive elements, including unused fuel, that are disposed of as nuclear waste in the United States. Although certain elements recycled from waste can be used for powering newer generations of nuclear reactors, extracting leftover fuel in a way that prevents possible misuse is an ongoing challenge.

Now, Texas A&M University engineering researchers have devised a simple, proliferation-resistant approach for separating out different components of nuclear waste. The one-step chemical reaction, described in the February issue of the journal Industrial & Engineering Chemistry Research, results in the formation of crystals containing all of the leftover nuclear fuel elements distributed uniformly.

The researchers also noted that the simplicity of their recycling approach makes the translation from lab bench to industry feasible.

"Our recycling strategy can be easily integrated into a chemical flow sheet for industrial-scale implementation," said Jonathan Burns, research scientist in the Texas A&M Engineering Experiment Station's Nuclear Engineering and Science Center. "In other words, the reaction can be repeated multiple times to maximize fuel recovery yield and further reduce radioactive nuclear waste."

The basis of energy production in nuclear reactors is thermonuclear fission. In this reaction, a heavy nucleus, usually uranium, when hit by subatomic particles called neutrons, becomes unstable and tears apart into smaller, lighter elements. However, uranium can absorb neutrons and get progressively heavier to form elements like neptunium, plutonium, and americium, before once again splitting and releasing energy.

Over time, these fission reactions lead to a buildup of lighter elements in the nuclear reactor. But roughly half of these fission products are deemed neutron poisons—they also absorb neutrons just like used nuclear fuel, leaving fewer for the fission reaction, eventually bringing the energy production to a halt.

Hence, used fuel rods contain fission products, leftover uranium and small quantities of plutonium, neptunium, and americium. Currently, these items are collectively considered nuclear waste in the United States and are destined to be stowed away in underground repositories because of their high radioactivity.

"Nuclear waste is a two-pronged problem," Burns said. "First, almost 95 percent of the starting material of the fuel is left unused, and second, the waste we produce contains long-lived, radioactive elements. Neptunium and americium, for example, can persist and radiate for up to hundreds of thousands of years." 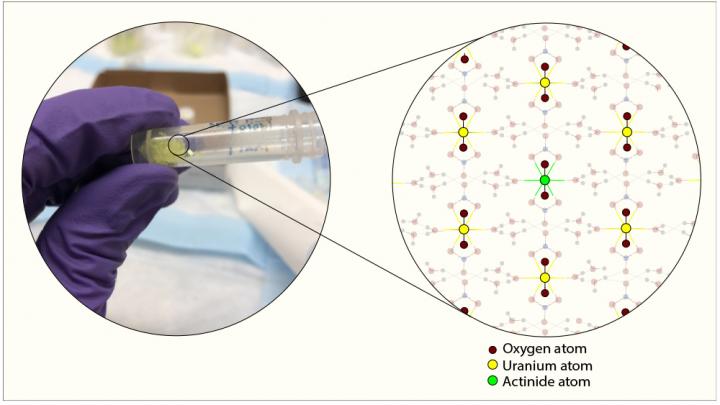 Scientists have had some success with separating uranium, plutonium, and neptunium. However, these methods have been very complex and have had limited success at separating americium. Furthermore, Burns said that the United States Department of Energy requires the recycling strategy to be proliferation-resistant, meaning that plutonium, which can be used in weapons, must never be separated from other nuclear fuel elements during the recycling process.

To address the unmet needs of nuclear waste recycling, the researchers investigated if there was a simple chemical reaction that could separate all the desirable used nuclear fuel chemical elements together.

From earlier studies, the researchers knew that at room temperature, uranium forms crystals in strong nitric acid. Within these crystals, uranium atoms are arranged in a unique profile—a central uranium atom is sandwiched between two oxygen atoms on either side by sharing six electrons with each oxygen atom.

"We immediately realized that this crystal structure could be a way to separate out plutonium, neptunium, and americium since all of these heavy elements belong to the same family as uranium," Burns said.

The researchers hypothesized that if plutonium, neptunium, and americium assumed a similar bonding structure with oxygen as uranium, then these elements would integrate themselves into the uranium crystal.

For their experiments, they prepared a surrogate solution of uranium, plutonium, neptunium, and americium in highly concentrated nitric acid at 60-90 degrees Celsius to mimic dissolving of a real fuel rod in the strong acid. They found when the solution reached room temperature, as predicted, that uranium, neptunium, plutonium, and americium separated from the solution together, uniformly distributing themselves within the crystals.

Burns noted that this simplified, single-step process is also proliferation-resistant since plutonium is not isolated but incorporated within the uranium crystals.

"The idea is that the reprocessed fuel generated from our prescribed chemical reaction can be used in future generations of reactors, which would not only burn uranium like most present-day reactors but also other heavy elements such as neptunium, plutonium, and americium," Burns said. "In addition to addressing the fuel recycling problem and reducing proliferation risk, our strategy will drastically reduce nuclear waste to just the fission products whose radioactivity is hundreds rather than hundreds of thousands of years."

- This press release was originally published on Texas A&M Today