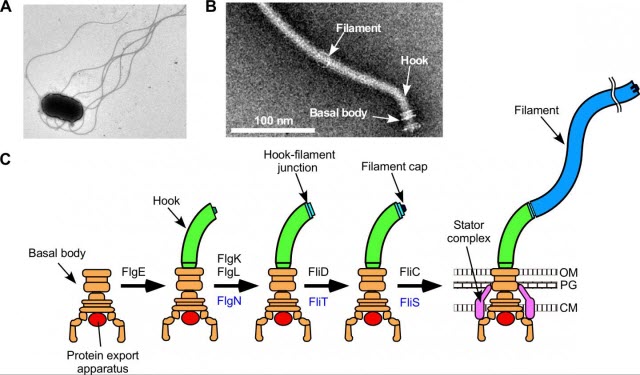 Osaka — Many bacteria are equipped with a flagellum, a helical propeller that allows bacteria to travel. The flagellum is assembled in a highly organized manner involving the stepwise addition of each of its internal parts. However, there are many open questions as to how this orderly construction is achieved. In a study published in Science Advances, a Japanese research team centered at Osaka University has uncovered new molecular details and provided a model explaining how stepwise flagellar assembly occurs.

As single-celled organisms, bacteria have devised elegant methods to move around their environment. The flagellum consists of a microscopic motor, which provides torque, and a long, rigid, spiral-shaped filament that drives propulsion. The motor and filament are connected by a flexible hook, which allows the bacteria to "steer." Much like any other motor, the parts of the flagellum have to be put together in exactly the right order.

"Flagellar assembly is a complex process involving more than 70 genes," lead author Naoya Terahara explains. "First, the basal motor is assembled, followed by the hook, and finally the helical filament. Each structure is built by sending a unique set of proteins to the site of assembly. The cell can somehow sense when each structure is complete, triggering a switch to export the next series of proteins. We wanted to develop a more detailed picture of how this switching occurs."

The export machinery sits at the base of the flagellum, and is made from nine copies of a protein that form a ring. The ring acts like a gatekeeper, selecting which proteins will travel out to the growing flagellum. The ring is incredibly small—mere nanometers in diameter—making precise analysis relatively difficult. To gain insight into this machinery, the researchers used high-speed atomic force microscopy. The approach, conducted through a collaborative effort with researchers at Kanazawa University, allowed the team to directly visualize the ring. By then making mutations in the ring, they could pinpoint which regions were responsible for triggering the export switch.

"The high-resolution microscopy allowed us to gain a better sense of which mutations disrupt export switching," Terahara adds. "Once we identified the individual amino acids in the ring protein that keep the ring intact, we could then test each one to see how it affects the export of the hook and filament proteins."

Through a series of biochemical assays, the team developed a detailed working model for how flagellar assembly occurs.

"Our findings suggest that subtle changes in the ring's shape determine which proteins are exported to the growing flagellum," lead investigator Tohru Minamino explains. "Once the hook has been assembled, contact points in the ring shift slightly, altering the ring's shape and allowing helical filament proteins to travel through."

The proposed model may have a significant impact on research into bacterial infections: the flagellum shares many similarities to the injectisome, a needle-like structure used by infectious bacteria to deliver proteins to their host. The study may thus serve as a map to better guide infectious disease research.

"We believe our model represents an important step forward in our mechanistic understanding of flagellar assembly," Minamino adds. "We're hopeful that our findings will eventually aid in the discovery of new therapies to combat bacterial diseases."