Scientists are providing the clearest view yet of an intact bacterial microcompartment, revealing at atomic-level resolution the structure and assembly of the organelle’s protein shell.

The work, led by scientists at the Department of Energy’s Lawrence Berkeley National Laboratory (Berkeley Lab) and Michigan State University (MSU), will appear in the June 23 issue of the journal Science. They studied the organelle shell of an ocean-dwelling slime bacteria called Haliangium ochraceum.

These organelles, or bacterial microcompartments (BMCs), are used by some bacteria to fix carbon dioxide, Kerfeld noted. Understanding how the microcompartment membrane is assembled, as well as how it lets some compounds pass through while impeding others, could contribute to research in enhancing carbon fixation and, more broadly, bioenergy. This class of organelles also helps many types of pathogenic bacteria metabolize compounds that are not available to normal, non-pathogenic microbes, giving the pathogens a competitive advantage.

The contents within these organelles determine their specific function, but the overall architecture of the protein membranes of BMCs are fundamentally the same, the authors noted. The microcompartment shell provides a selectively permeable barrier which separates the reactions in its interior from the rest of the cell. This enables higher efficiency of multi-step reactions, prevents undesired interference, and confines toxic compounds that may be generated by the encapsulated reactions.

Unlike the lipid-based membranes of eukaryotic cells, bacterial microcompartments (BMCs) have polyhedral shells made of proteins.

“What allows things through a membrane is pores,” said study lead author Markus Sutter, MSU senior research associate and affiliate scientist at Berkeley Lab’s Molecular Biophysics and Integrated Bioimaging (MBIB) division. “For lipid-based membranes, there are membrane proteins that get molecules across. For BMCs, the shell is already made of proteins, so the shell proteins of BMCs not only have a structural role, they are also responsible for selective substrate transfer across the protein membrane.” 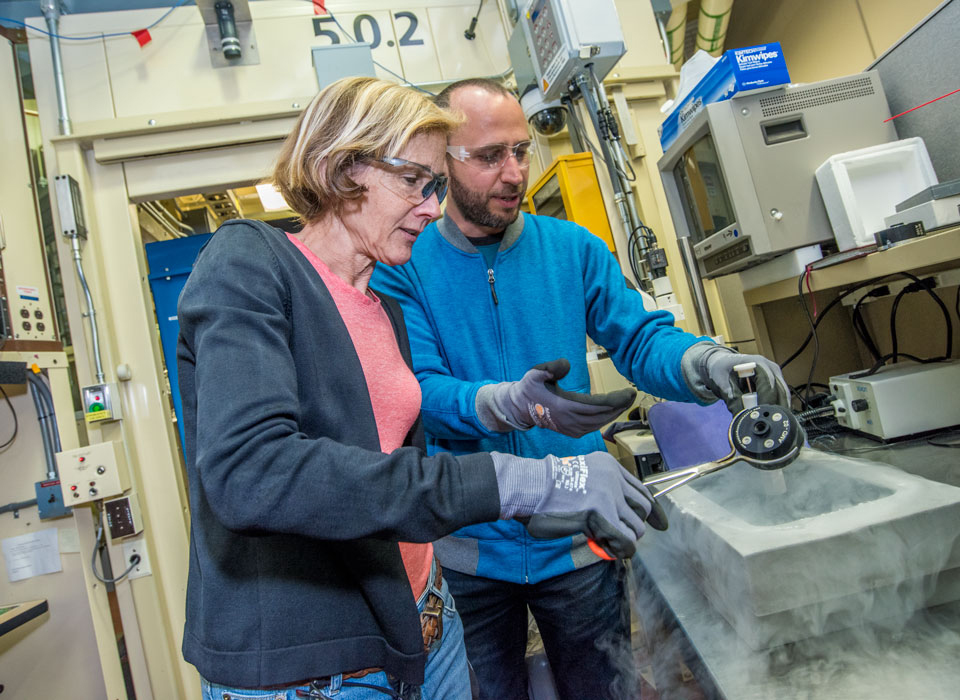 Cheryl Kerfeld and Markus Sutter handle crystallized proteins at Berkeley Lab’s Advanced Light Source.Photo Credit: Marilyn Chung/Berkeley LabEarlier studies revealed the individual components that make up the BMC shell, but imaging the entire organelle was challenging because of its large mass of about 6.5 megadaltons, roughly equivalent to the mass of 6.5 million hydrogen atoms. This size of protein compartment can contain up to 300 average-sized proteins.

The intact shell and component proteins were crystallized at Berkeley Lab, and X-ray diffraction data were collected at Berkeley Lab’s Advanced Light Source and the Stanford Synchrotron Radiation Lightsource, both DOE Office of Science User Facilities.

The study authors said that by using the structural data from this paper, researchers can design experiments to study the mechanisms for how the molecules get across this protein membrane, and to build custom organelles for carbon capture or to produce valuable compounds.

Other co-authors of the study are Basil Greber, an affiliate of Berkeley Lab’s MBIB division and a UC Berkeley postdoctoral fellow in the California Institute for Quantitative Biosciences, and Clement Aussignargues, a postdoctoral fellow at the MSU-DOE Plant Research Laboratory.

The DOE Office of Science and the National Institutes of Health provided support for this study.