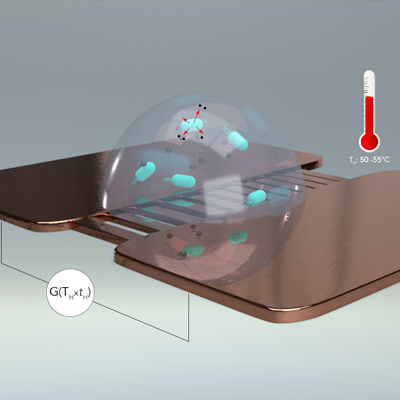 Under mild heat shock, Salmonella dies mainly due to leakage of small cytoplasmic molecules.Image credit: Jennifer McCann/Penn StateThe most economical way to kill the bacteria that cause common foodborne illnesses—mostly caused by Salmonella enterica—is heat, but the mechanisms that kill Salmonella at lower temperatures were not fully understood until now, according to a team of researchers.

Bacteria can develop ways to cope with heat shock, so it is important to develop a complete understanding of how heat kills them.

Using droplet-based electrical sensors she developed as a PhD student at Purdue University, Aida Ebrahimi, an assistant professor of electrical engineering, Penn State, has determined that mild heat stress at temperatures around 120° F damages the bacteria’s cell wall without rupturing them.

The researchers conducted multiple experiments using both wild-type and heat resistant Salmonella bacteria and correlated the electrical results with fluorescence measurement and standard microbiology protocols. The modified bacteria required higher energy to make the cell membranes permeable enough to leak small molecules. They also studied heating time and heating method, either a slower ramp-up of heat or a sudden pulse of heat and found that pulsed heat was more effective at killing bacteria.

The authors of a paper appearing Feb. 6 in Biophysical Journal (Cell Press) then developed an analytical model based on their experiments that correlated membrane damage, cytoplasmic leakage and cell death. By better understanding the mechanisms of bacterial death at elevated temperatures, these findings can potentially improve food safety strategies and provide more efficient ways to deactivate bacteria using shorter duration of heating at lower temperatures.

The work was supported by the National Science Foundation and a Bilsland Fellowship Award.