While crop diseases have devastating consequences on agriculture, causing losses of up to 30 percent in some crops, plants constantly evolve to maintain robust immune systems that allow them to perceive pathogens and develop defenses. One key player in this system is the plant cell wall, a complex structure that surrounds all plant cells. The plant cell wall is a dynamic structure modified by interactions with microbes and environmental stresses. These modifications alter the integrity of the cell wall and often activate plant immunity and disease resistance responses.

Scientists are always looking for ways to improve crop disease resistance by advancing their knowledge of the plant immunity system. In a study published recently, a group of biologists discovered that cell wall extracts from immune active plants could be used by agriculture companies to develop sustainable treatments that help crops protect against pathogens and pests.

Antonio Molina and his research group at Centro de Biotecnología y Genómica de Plantas in Spain aimed to understand the role of the cell wall in the regulation of plant resistance responses to pathogens. To do that, a collection of mutants with alterations on their cell walls composition/structure were selected and their resistance to different pathogens analyzed.

"Our results support the potential use of formulations based on cell wall-derived molecules that trigger immune responses," explained Antonio Molina. "The use of such formulations could present a simple, sustainable, and effective treatment to protect crops against losses." 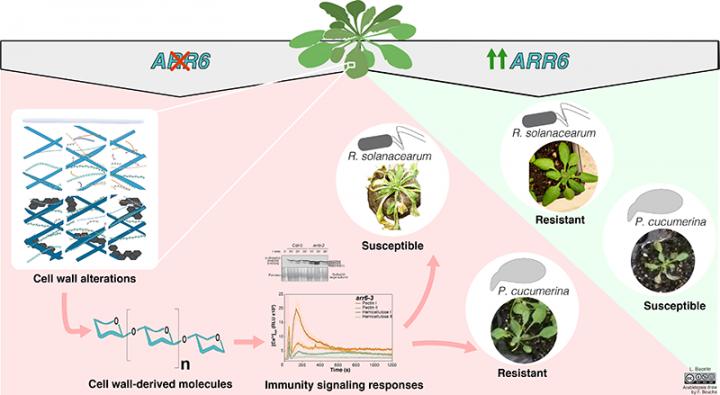 The research focused on the Arabidopsis Response Regulators 6 (ARR6) gene, which has been shown to be involved in the responses mediated by the plant hormones known as cytokinins. Molina and his colleagues showed that ARR6 is actually a regulator of cell wall composition and of the disease resistance responses of the model plant Arabidopsis thaliana against different pathogens causing important crops diseases. This discovery reinforces the role the plant cell wall in the modulation of specific immune responses.

"We have identified a pectin-enriched cell wall fractions of arr6 mutant that has an enhanced activity in triggering defense response in Arabidopsis plants," said Molina. "This finding indicate that the cell walls of arr6 mutant have a differential composition than that of wild-type plants, and that arr6 walls might contain molecules which could contribute to the differential resistance response to fungi and bacteria observed in these plants. This points to an interesting, novel interaction between wall composition, innate immunity signaling and disease resistance."

Molina's research group was most surprised to find that the differential resistance responses activated in arr6 plants were not the "classical" disease resistant responses characterized so far, indicating that novel defensive mechanisms associated with alteration on cell wall composition will be discovered, like the immune responses described in their article.