Researchers at the University of Adelaide have shown how a complex mix of plant compounds derived from ancient clinical practice in China—a traditional Chinese medicine—works to kill cancer cells. 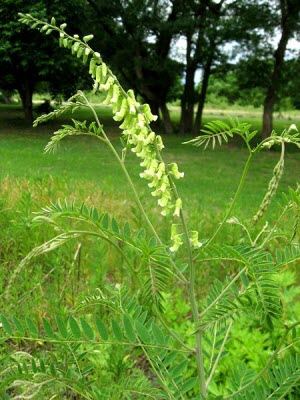 The Sophora flavescens plant. Its root is known as Kushen and used in traditional Chinese medicine.Photo credit: Penarc, Wikimedia CommonsCompound kushen injection (CKI) is approved for use in China to treat various cancer tumors, usually as an adjunct to western chemotherapy—but how it works has not been known.

This study, published in the journal Oncotarget, is one of the first to characterize the molecular action of a traditional Chinese medicine rather than breaking it down to its constituent parts.

“Most traditional Chinese medicine are based on hundreds or thousands of years of experience with their use in China,” says study leader, Professor David Adelson, director of the Zhendong Australia – China Centre for the Molecular Basis of Traditional Chinese Medicine.

“There is often plenty of evidence that these medicines have a therapeutic benefit, but there isn’t the understanding of how or why.

“If we broke down and tested the components of many traditional Chinese medicines, we would find that individual compounds don’t have much activity on their own. It’s the combination of compounds which can be effective, and potentially means few side-effects as well.

“This is one of the first studies to show the molecular mode of action of a complex mixture of plant-based compounds—in this case extracts from the roots of two medicinal herbs, Kushen and Baituling—by applying what’s known as a systems biology approach. This is a way of analyzing complex biological systems that attempts to take into account all measurable aspects of the system rather than focusing on a single variable.”

The Centre was established with a donation by the Zhendong Pharmaceutical Company, with the aim of understanding how traditional Chinese medicine works, and the long-term aim of possible integration into western medicine.

The researchers used high-throughput next generation sequencing technologies to identify genes and biological pathways targeted by CKI when applied to breast cancer cells grown in the laboratory.

“We showed that the patterns of gene expression triggered by CKI affect the same pathways as western chemotherapy but by acting on different genes in the same pathways,” says Professor Adelson.

“These genes regulate the cell cycle of division and death, and it seems that CKI alters the way the cell cycle is regulated to push cancer cells down the cell death pathway, therefore killing the cells.”

Professor Adelson says this technique could be used to analyze the molecular mechanisms of other traditional Chinese medicines, potentially opening their way for use in western medicine.