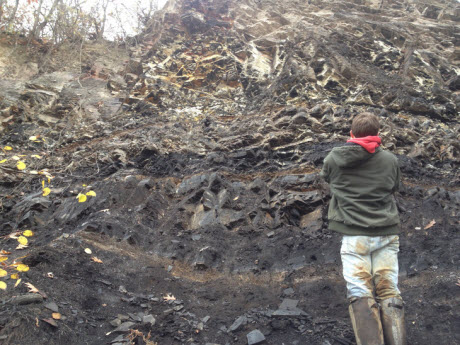 "We hope that this work will develop new ways for studying the processes that occur during hydraulic fracturing in a more controlled lab setting," said Travis Tasker, a doctoral candidate in environmental engineering at Penn State and principle investigator on the study. "This could also have implications for managing the wastewater that returns to the surface or understanding downhole mineral transformations that could form precipitates, clog pores, and reduce a well's gas productivity."

Many gas formations, such as the Marcellus Shale, exist several thousand feet below the surface in higher pressure and temperature environments. Hydraulic fracturing, also known as fracking, is a common method for extracting natural gas from these formations. Fracking uses the process of injecting millions of gallons of a mixture made of sand, water, and chemical additives into shale formations at high pressures. This injection causes the shale to fracture and release trapped gases. After the fracturing occurs, the chemical additives, along with metals associated with the shale itself, flow back to the surface in wastewaters at high concentrations.

Since many of the chemicals used for natural gas extraction have acute or chronic health effects in humans, the transport, degradation, and transformation of these additives is important to understand when considering the management and disposal of the wastewater that returns to the surface.

In order to answer these questions, the team, which included Tasker; William Burgos, professor of environmental engineering; Paulina Piotrowski, doctoral candidate in chemistry and biogeochemistry; and Frank Dorman, associate professor of biochemistry and molecular biology, had to determine where the metals were concentrated in shale samples, how the composition of hydraulic fracturing fluids affected metal mobility and how hydraulic fracturing fluids are transformed under high pressure and temperature conditions.

To determine where metals were concentrated, the team collected deep shale samples—from depths greater than 4,000 feet—from six locations throughout Pennsylvania and exposed them to a variety of different solutions designed to displace the metals from specific minerals within the shale. Next they exposed the shale samples to high pressure and temperature conditions (>3,000 psi and >60 degrees C) with a synthetic hydraulic fracturing fluid representative of what many gas companies use in the field. The resulting fluid was then examined to determine how specific conditions such as pressure, pH, temperature, and organic composition affected the fate of fracturing fluid additives and metal mobilization from the shale and to determine exactly where in the process the metals were being mobilized.

"We were able to show that fluids with acids, oxidizers, and high salinity increased the amount of metals mobilized from shale following hydraulic fracturing," Tasker said.

Related Article: What Happens to Hydraulic Fracturing Wastewater on Cropland

"This suggests that while many hydraulic fracturing additives are degraded downhole, additives such as surfactants or potentially other hydrophilic compounds could return to the surface where they would have to be treated appropriately," Tasker said.

Furthermore, only the combination of shale and high pressure and temperature conditions led to near complete removal of the synthetic hydraulic fracturing fluids from the solution.

These results show the importance of pressure, temperature, and shale when trying to create a model for studying the organic transformation or degradation of hydraulic fracturing additives.

Following this study, the researchers would like to look at how the mechanical properties of shale are affected by the fracturing fluid chemistry.

"Our work showed that the fracturing fluid chemistry does influence metal leaching from the shale that can lead to secondary mineral precipitation," Tasker said. "It is important to understand how mineral precipitation and other mineralogical changes would affect overall gas recovery."

This study was published in Environmental Engineering Science in October 2016.

This research was funded by the U.S. Department of Energy's National Energy Technology Laboratory, funded by NETL through a support contract with URS Energy & Construction Inc.