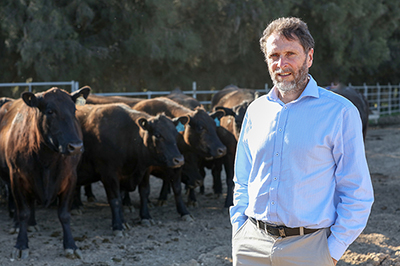 Published in the journal Science Advances, the researchers showed that the genetics of an individual cow strongly influenced the make-up of the microorganisms in its rumen (the first stomach in the digestive system of ruminant animals which include cattle and sheep).

“What we showed is that the level and type of methane-producing microbes in the cow is to a large extent controlled by the cow’s genetic makeup,” says one of the project’s leaders and co-author professor John Williams, from the University of Adelaide’s School of Animal and Veterinary Sciences. “That means we could select for cattle which are less likely to have high levels of methane-producing bacteria in their rumen.”

Cattle and other ruminants are significant producers of the greenhouse gas methane—contributing 37 percent of the methane emissions resulting from human activity. A single cow on average produces between 70 and 120 kg of methane per year and, worldwide, there are about 1.5 billion cattle.

The study comes out of a project called RuminOmics, led by the Rowett Institute at the University of Aberdeen and involving the Parco Tecnologico Padano in Italy (where Williams used to work), the Ben-Gurion University of the Negev in Israel, and a number of other institutions in Europe and the US.

The researchers analysed the microbiomes from ruminal fluid samples of 1000 cows, along with measuring the cows’ feed intake, milk production, methane production, and other biochemical characteristics. Although this study was carried out on dairy cows, the heritability of the types of microbes in the rumen should also apply to beef cattle.

“Previously we knew it was possible to reduce methane emissions by changing the diet,” says Williams. “But changing the genetics is much more significant—in this way we can select for cows that permanently produce less methane.”

Williams says breeding for low-methane cattle will, however, depend on selection priorities and how much it compromises selection for other desired characteristics such as meat quality, milk production, or disease resistance.

“We now know it’s possible to select for low methane production,” he says. “But it depends on what else we are selecting for, and the weighting that is placed on methane—that’s something that will be determined by industry or society pressures.”

The researchers also found a correlation, although not as high, between the cows’ microbiomes and the efficiency of milk production.

“We don’t yet know, but if it turned out that low-methane production equated to greater efficiencies of production—which could turn out to be true given that energy is required to produce the methane—then that would be a win, win situation,” Williams says.

This research, from the Davies Research Centre at the University of Adelaide’s Roseworthy campus, aligns with the University’s industry engagement priority in agrifood and wine, and in tackling the grand challenge of environmental sustainability.