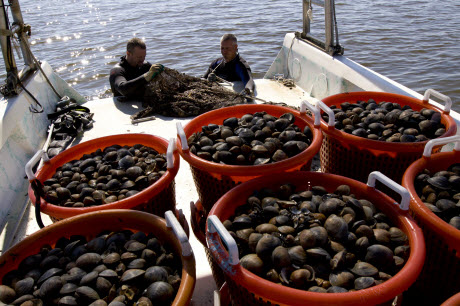 Clam fishermen harvesting bags of mature clams off the coast of Cedar Key, Florida.Photo credit: Tyler Jones, UF/IFAS“Seafood appears as safe to eat now as it was before the spill,” said , associate professor of environmental and global health and director of the Aquatic Pathobiology Laboratory at UF’s Emerging Pathogens Institute.

Following the Deepwater Horizon Oil Spill in 2010, many people were concerned that seafood was contaminated by either the oil or dispersants used to keep the oil from washing ashore.  Those concerns were still present during a study three years later conducted by UF for the Healthy Gulf, Healthy Communities Project, funded by the National Institute of Environmental Health Sciences, a sub-agency of the National Institutes of Health.

Kane and his team, including researchers from UF’s Center for Human and Environmental Toxicology, and the Institute of Food and Agricultural Sciences, tested inshore-harvested species of coastal seafood along the Gulf of Mexico – typically caught within a half a mile of the coastline.  They looked at polyaromatic hydrocarbons (PAHs), which are a component of oil that can accumulate in plankton and microorganisms, and can then be ingested by fish and other seafood. PAHs are monitored because some can cause cancer.  The Food and Drug Administration long ago established “Levels of Concern” (LOCs) for PAHs in fish and shellfish.  These LOCs are based on the toxicity of specific contaminants, if present, the levels of these contaminants present in seafood, how much seafood people eat, consumer body weight, and other factors.

Contaminant data from sampled seafood is being combined with seafood consumption data from coastal residents who participated in the UF study.  Study participants represented potentially “high-end consumers” – people who may eat a lot more seafood harvested along the Gulf coast than the average consumer in the United States.  Survey data was collected at fishing tournaments, seafood festivals, fishing piers, etc., and survey responses that indicated that two-thirds of participants live in households with a commercial or recreational fisher.

These residents consumed anywhere from 200 to 980 percent more seafood (based on the consumers’ age and seafood type eaten) than the general public.  Even taking into account their substantially higher seafood consumption rates compared to national statistics, Kane said that the extremely small levels of contaminants observed likely represent baseline levels and are probably not sufficient to affect these “high-end consumers.”

In Kane’s study, all seafood tested so far has shown “remarkably low PAH contaminant levels,” based on FDA standards, and revealed that:

As such, levels of PAHs observed in this study were in the low parts per billion range, compared to FDA’s levels of concern in the parts per million range.  As a reference, a part per billion can be compared to one penny in 10 million dollars, 1 second in 32 years, or one drop of water in an Olympic-size swimming pool. One part per million would be approximately 10 teaspoons of water in that same pool.

Residents appear to have lingering concerns – 55 percent of surveyed participants had some or significant concerns about the health of the Gulf’s ecosystem.

Although there are still basic science questions to be answered regarding the chemical signature of the Deepwater Horizon oil spill in seafood, and the fate of this oil in the environment, the basic outcome remains positive: researchers don’t see evidence that the oil spill has created significant seafood-related risks.

The next step in the seafood safety project is risk analysis.  This will take into account the amount of PAHs measured in seafood, and will calculate potential risk for coastal residents based on factors including the body weight of the person and the amount of seafood consumed.  These analyses will put together the big picture for scientists to link environmental data to public health, and refine outreach and community resiliency programs.