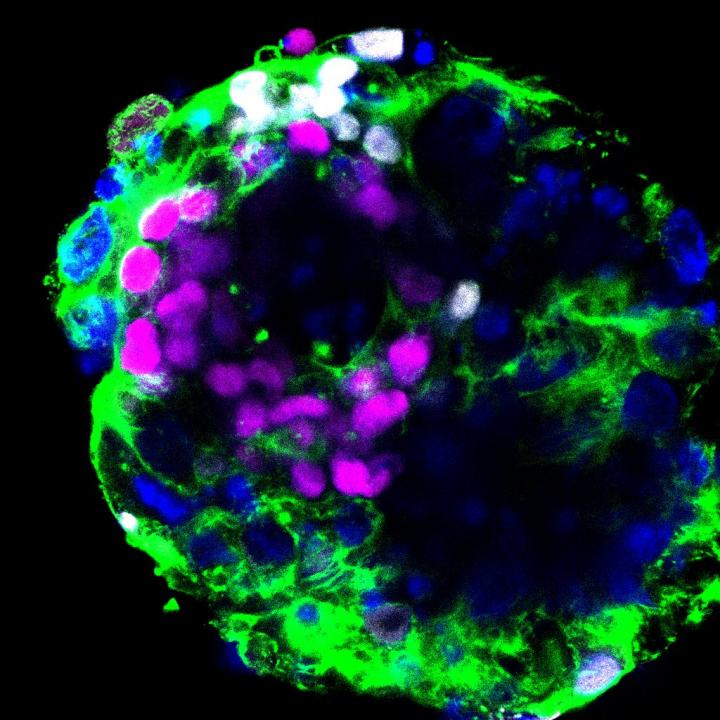 Image of a human embryo cultured in vitro through the implantation stages and stained to reveal OCT4 transcription factor, magenta; GATA6 transcription factor, white; F-actin, green; and DNA, blue. Analysis of patterns of gene expression in such embryos reveals that ACE2, the receptor for the SARS-CoV-2 virus, and the TMPRSS2 protease that facilitates viral infection are expressed in these embryos, which represent the very early stages of pregnancy.
Zernicka-Goetz lab

Genes that are thought to play a role in how the SARS-CoV-2 virus infects our cells have been found to be active in embryos as early as during the second week of pregnancy, say scientists at the University of Cambridge and the California Institute of Technology (Caltech). The researchers say this could mean embryos are susceptible to COVID-19 if the mother gets sick, potentially affecting the chances of a successful pregnancy.

While initially recognized as causing respiratory disease, the SARS-CoV-2 virus, which causes COVID-19 disease, also affects many other organs. Advanced age and obesity are risk factors for complications but questions concerning the potential effects on fetal health and successful pregnancy for those infected with SARS-CoV-2 remain largely unanswered.

To examine the risks, a team of researchers used technology developed by professor Magdalena Zernicka-Goetz at the University of Cambridge to culture human embryos through the stage they normally implant in the body of the mother to look at the activity—or 'expression'—of key genes in the embryo. Their findings were published Aug. 4 in the Royal Society's journal Open Biology.

The researchers found patterns of expression of the genes ACE2, which provide the genetic code for the SARS-CoV-2 receptor, and TMPRSS2, which provides the code for a molecule that cleaves both the viral spike protein and the ACE2 receptor, allowing infection to occur. These genes were expressed during key stages of the embryo's development, and in parts of the embryo that go on to develop into tissues that interact with the maternal blood supply for nutrient exchange. Gene expression requires that the DNA code is first copied into an RNA message, which then directs the synthesis of the encoded protein. The study reports the finding of the RNA messengers.

"Our work suggests that the human embryo could be susceptible to COVID-19 as early as the second week of pregnancy if the mother gets sick," said Zernicka-Goetz, who holds positions at both the University of Cambridge and Caltech. "To know whether this really could happen, it now becomes very important to know whether the ACE2 and TMPRSS2 proteins are made and become correctly positioned at cell surfaces. If these next steps are also taking place, it is possible that the virus could be transmitted from the mother and infect the embryo's cells."

Professor David Glover, also from Cambridge and Caltech, added: "Genes encoding proteins that make cells susceptible to infection by this novel coronavirus become expressed very early on in the embryo's development. This is an important stage when the embryo attaches to the mother's womb and undertakes a major remodeling of all of its tissues and for the first time starts to grow. COVID-19 could affect the ability of the embryo to properly implant into the womb or could have implications for future fetal health."

The team says that further research is required using stem cell models and in non-human primates to better understand the risk. However, they say their findings emphasize the importance for women planning for a family to try to reduce their risk of infection.

"We don't want women to be unduly worried by these findings, but they do reinforce the importance of doing everything they can to minimize their risk of infection," said Bailey Weatherbee, a PhD student at the University of Cambridge.