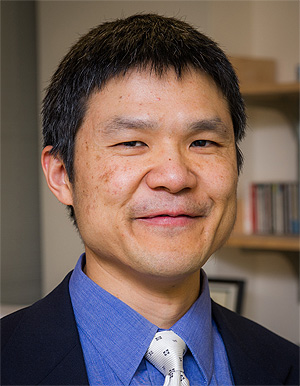 The paper, published online Jan. 26 by JAMA Oncology, focuses on Fusobacterium nucleatum, one of hundreds of types of bacteria that dwell in humans’ large intestines, and one that is thought to play a role in colorectal cancer. By tracking the diets of more than 137,000 people for decades and examining more than 1,000 colorectal tumor samples for F. nucleatum, the researchers determined that individuals with a “prudent” diet—rich in whole grains and fiber—had a lower risk of developing colorectal cancer containing the bacterium, but their risk for colorectal cancer that lacked the bacterium was essentially unchanged.

Prudent diets appear to protect against colorectal cancer. The new study suggests that healthy foods may achieve these benefits, in part, by altering the relative amounts of various microorganisms in the digestive tract, including F. nucleatum.

“Though our research dealt with only one type of bacteria, it points to a much broader phenomenon—that intestinal bacteria can act in concert with diet to reduce or increase the risk of certain types of colorectal cancer,” said Shuji Ogino, MD, PhD, of Dana-Farber, Harvard T.H. Chan School of Public Health, and Brigham and Women’s Hospital, the co-senior author of the study with Charles Fuchs, MD, MPH, director of the Gastrointestinal Cancer Center at Dana-Farber and Brigham and Women’s, and Andrew Chan, MD, MPH, of Massachusetts General Hospital, Brigham and Women’s, and the Broad Institute of MIT and Harvard.

“These data are among the first in humans that show a connection between long-term dietary intake and the bacteria in tumor tissue. This supports earlier studies that show some gut bacteria can directly cause the development of cancers in animals,” added Chan.

The research drew on dietary records of 137,217 participants in the Nurses’ Health Study and Health Professionals Follow-up Study—large-scale health-tracking studies—some of whom developed colon or rectal cancer over a period of decades. The researchers measured the levels of F. nucleatum in the patients’ tumor tissue and blended these data with information of diet and cancer incidence.

“Recent experiments have suggested that F. nucleatum may contribute to the development of colorectal cancer by interfering with the immune system and activating growth pathways in colon cells,” Ogino remarked. “One study showed that F. nucleatum in the stool increased markedly after participants switched from a prudent to a Western-style, low fiber diet. We theorized that the link between a prudent diet and reduced colorectal cancer risk would be more evident for tumors enriched with F. nucleatum than for those without it.”

That is precisely what the study results showed: Participants who followed a prudent diet had a sharply lower risk of developing colorectal cancer laden with F. nucleatum. But they received no extra protection against colorectal cancers that didn’t contain the bacteria.

“Our findings offer compelling evidence of the ability of diet to influence the risk of developing certain types of colorectal cancer by affecting the bacteria within the digestive tract,” Ogino commented.

“The results of this study underscore the need for additional studies that explore the complex interrelationship between what someone eats, the microorganisms in their gut, and the development of cancer,” said Chan.