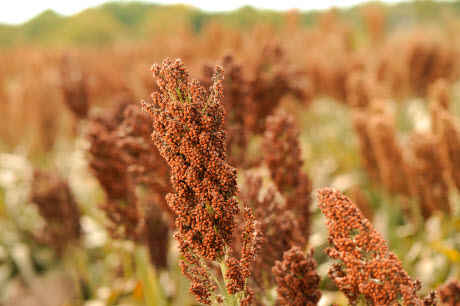 A recent study on plant height in sorghum will likely be applicable to other economically important traits, such as crop yield.Photo courtesy of Kansas State UniversityMANHATTAN — A study on a sorghum population at Kansas State University has helped researchers better understand why a crop hybrid often performs better than either of its parent lines, known as heterosis.

The findings are specific to plant height in sorghum, but a Kansas State University agronomist says they will likely be applicable to other economically important traits, such as crop yield.

The research, "Dissecting repulsion linkage in the dwarfing gene Dw3 region for sorghum plant height provides insights into heterosis," was published Sept. 8 in the Proceedings of the National Academy of Sciences.

"Heterosis is a complex genetic phenomena that has been theorized in many different ways," said Tesfaye Tesso, a Kansas State University associate professor of agronomy. "This study adds another dimension to that complexity by pinpointing the impact of repulsion phase linkage on heterosis."

The repulsion phase linkage refers to the link between dominant alleles — forms of the gene responsible for hereditary characteristics — of one or more genes, and the recessive alleles of another.

"Plant height is a relatively simple trait and is easier to track in segregating a population," Tesso said. "Other economically important traits such as yield are more complex, but like plant height, heterosis has a significant contribution to yield. If we know as much information about heterosis for yield as we do for plant height, it will increase our ability to select parental lines that are most compatible and give maximum heterosis."

Tesso managed the sorghum population used in this study in Kansas State University research fields. The population is a recombinant inbred line, which allows researchers to produce large amounts of seed for replicated trials.

Tesso said that plant breeders can immediately use these findings to influence plant height in new sorghum lines. Eventually, the results will help to improve many other desirable traits in sorghum.

Sorghum is an important crop around the world, especially in many African countries where it's estimated that hundreds of millions of people rely on the crop as a food source.

The United States is the world's top exporter of grain sorghum, accounting for almost 75 percent of global trade, according to the U.S. Grains Council. China, which primarily uses the crop for livestock feed, is the top importer of U.S. sorghum.